In Iran, It's Norooz Tradition to Jump Over Fire for Good Luck 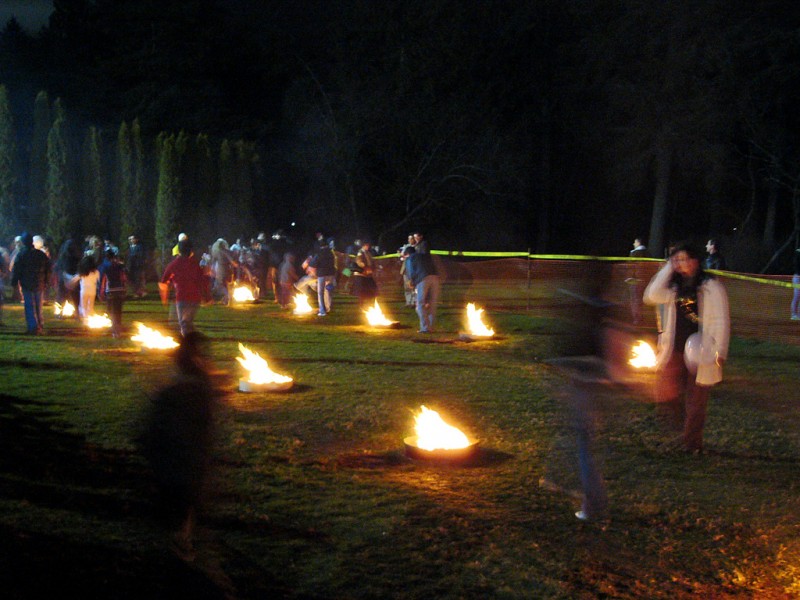 By Philippe Giabbanelli. CC BY 3.0 via Wikipedia Commons

All over the world people will be celebrating Norooz (Persian for New Day) this coming March 21. The new year holiday isn't simply a day, however. It is a two-week festival of cleaning, cooking, family, and celebration.

During that time, many in Iran will take a vacation from work. They will drive on mountain highways to villas in the north of the country. They will camp out in the warm cities of the south. They will get stuck in traffic, visit loved ones, and eat delicious foods. And it all begins with a bit of fire jumping.

The Iranian calendar, unlike the Gregorian calendar, which marks the new year on January 1, starts at the beginning of spring in the northern hemisphere. Norooz gets underway on the evening before the last Wednesday of the year, known as Chaharshanbe Suri (چهارشنبه سوری) or Red Wednesday. To celebrate, it's a tradition for people in Iran to build bonfires and jump over the flames as well as light fireworks.

This can probably be better understood as “take away my weakness and give me your strength”. It expresses hope for good fortune in the new year.

Instagram user mojtabadorbidi shared a montage of photos of Chaharshanbe Suri celebrations ahead of the holiday, while the Iranian Instagram account for VitaeneC, a Vitamin C drink, shared a quirky video.

About a month before the new year, Iran hosts its annual Fajr Film Festival. The movies featured at the festival often end up in cinemas around the country. Tehran Bureau, a news outlet focused on Iran and hosted by the Guardian, published an article previewing the films that will be playing during Norooz. The author writes:

What are going to be the most successful films at Nowruz around the country? I’d say Bodyguard, and Life Without Parole. The silver screen will portray two very different – yet both deeply scarred – Irans.

Bodyguard examines the life of a man who protects a high-ranking politician and his grapple with compromising idealism, while Life Without Parole follows the drama of a family preparing to part with a sister, due to wed in Afghanistan in an arranged marriage.

On the small screen, many are sharing a music video uploaded on March 3 of American singer LaToya Jackson — the sister of the late Michael Jackson — and popular Iranian singer Andy, who lives in the US. They both sing in Persian about how much they miss Tehran:

Another video being shared is a new release by Iranian musician Moslem Rasouli titled “Nowruz 95″ and published on the Facebook page of alternative music site Radio Gramaphone. It features shots of people's feet as they dance to his instrumental, beat-heavy song. The video is also available on YouTube: