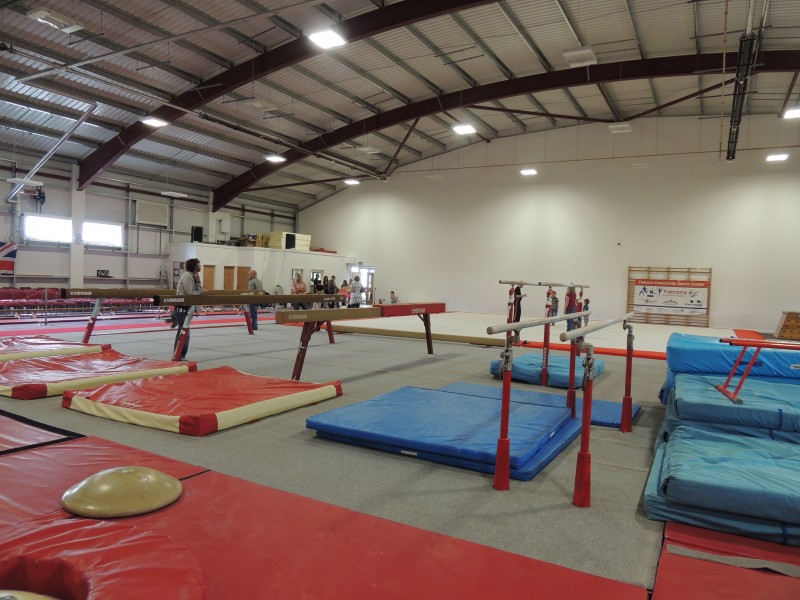 A community gymnastics centre; photo by North Devon Council, used under a CC BY 2.0 license.

Two weeks ago, the Trinidad and Tobago Gymnastics Federation (TTGF) announced that it would meet to discuss topless photos being shared online of two Olympic hopefuls and decide whether disciplinary action should be taken against them.

At the time, the organisation, which sets the policies for the sport in the country and is charged with its promotion and development, made the point that neither Thema Williams, the Trinidadian first pick for the Rio Olympics, nor Marissa Dick, the Canadian-born alternate with Trinidadian roots, was owed a place, saying that the spot belongs to the Trinidad and Tobago Olympic Committee (TTOC).

On March 16, the TTGF finally announced that Williams made the cut for the 2016 Rio Olympics Test Event scheduled to take place on April 13-18, 2016, but the decision has come after much controversy.

Months ago, Williams had briefly posted a topless photo on Instagram with the caption that it was always an honour to be a black woman. Dick had posted a topless pic on Snapchat. In both cases, the women's breasts were obscured.

People using fictitious names sent the photos to the TTGF. In response, the local gymnastics organisation promised to decide both athletes’ fate before a disciplinary committee — and then drew out the process.

News site Wired868 made the observation that:

News that the TTGF is prepared to find a third gymnast at short notice, if necessary, to represent the country, may not appease concerned fans, who are anxious to see the country get the best possible representation at the upcoming Olympics.

And it certainly won’t calm the nerves of the two young gymnasts, who are anxiously awaiting their fate.

That initial disciplinary committee meeting was delayed, allegedly over the unavailability of an attorney willing to offer pro bono advice. Although the TTGF insisted that the matter would be handled “with an open mind”, it did make the pronouncement that both athletes were in breach of their contracts — leaving many to speculate over whether the disciplinary meeting would affect which athlete represented the country in April’s Rio Olympics Test Event.

An outpouring of support

While that decision hung in the balance, local celebrities, including Williams’ godmother comedian Nikki Crosby, came out in support of the gymnast by posing topless (albeit with their backs to camera), and using the hashtag #WeSupportThema: 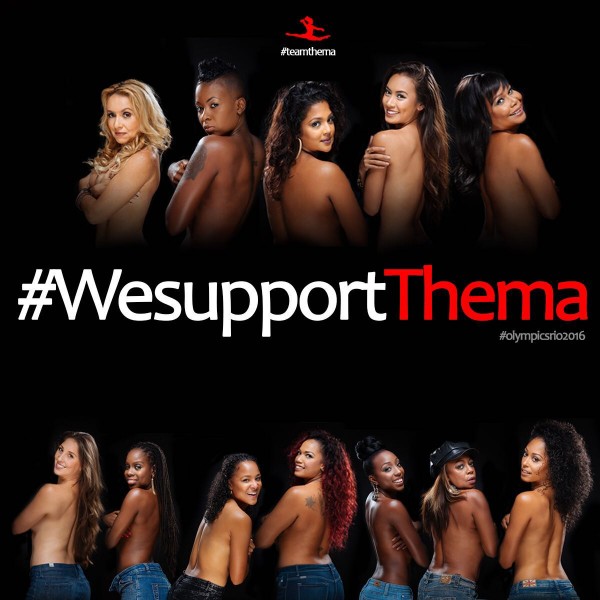 Wired868 lamented the fact that both athletes — Williams (first choice) and Dick (the alternate) — whose pictures were sent to the TTGF by people using fake names and personas were being left in limbo over such an important decision. Several Facebook users were agitating for netizens to place further pressure on the TTGF.

Things soon started to snowball. The TTGF's disciplinary committee referred the matter to its council, further drawing out the process. The country's Minister of Sport Darryl Smith took a controversial hands-off approach.

Williams’ American coach, John Geddert, accused the TTGF of compromising her Olympic preparations by refusing permission for her to attend a critical meet. Moreover, the finer details of Williams’ contract came under scrutiny. Wired868 explained:

Williams’ Olympic Games contract gives the TTGF the right to take the ultimate sanction against the athlete for performing at a meet that is not directly sanctioned by either the local body or the International Gymnastics Federation (FIG).

The TTGF determined that the meet which Williams’ coach wanted her to enter was beneath the athlete's skill level (regardless of the fact that she competed in the same event last year). An anonymous TTGF executive member maintained that “Section 1.3 of the athletes’ contract meant that the gymnasts could only participate in FIG or TTGF events and not that they could compete in other events once sanctioned”:

If the federation should breach clause three, then Marisa should sue us and go to Rio. Because the contract would be null and void.

The TTGF was not prepared to open itself up to a lawsuit and warned William's coach that if his athlete competed in the meet in question, she would be in breach of contract.

The issue of race?

Williams’ father, himself fed up with the TTGF's extended silence on the matter, called it as he saw it:

I remember, as a young boy watching Sesame Street, (seeing) a child ask an adult: ‘Is silence a sound?’ […] To this day, they [the TTGF] have remained so silent it is deafening. I want to believe that their silence in this case is a sound. [..]

In a curious development, one member of the local gymnastics fraternity, in an interview with Wired868, claimed “that race is a factor and Dick, who was born in Canada but qualifies to represent Trinidad through her mother, Hannifa, is the gymnast who is being victimised and not the other way around”:

The federation is divided because there are people who want to see a black girl from tots and tumblers go to Rio. They don’t want the best gymnast to go, they want a black girl to go!

The source also insisted that the Trinidad and Tobago Olympic Committee (TTOC) president, who stated early on that Williams had already earned her spot, “cannot tell the federation who can go to the Olympics”.

As it turns out, the TTOC was right. Thema Williams will represent Trinidad and Tobago in Rio. The TTGF has come out the worst in the entire debacle, losing any semblance of public trust and intensifying calls to “hear the sound of feet shuffling out of office, giving way for knowledgeable and competent people to take the helm and take gymnastics out of the dark ages.”