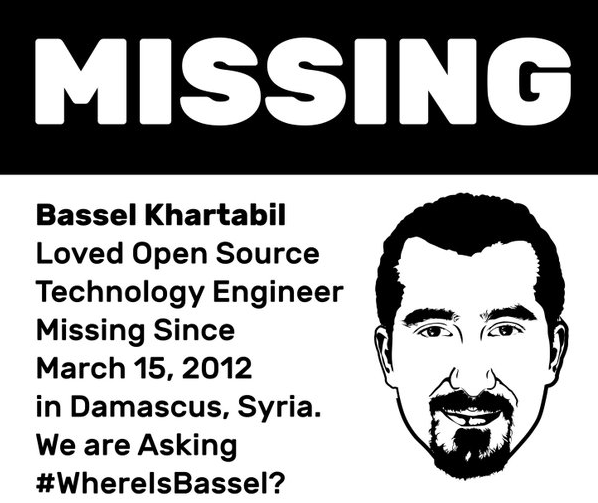 Friends and supporters of Syrian-Palestinian web developer and open-source enthusiast Bassel Khartabil today re-ignited a campaign demanding information on his whereabouts. In October 2015, the technologist, who is also known as Bassel Safadi, was moved from the notorious Adra civilian prison in Damascus to an unknown location.

Supporters across the globe are calling for information on his whereabouts and safety, and organizing public demonstrations in multiple cities in Europe and the United States for March 19, 2016.

Khartabil, who had spent four years in prison before his forced disappearance, was a Creative Commons leader in Syria and worked actively projects like Mozilla Firefox and Wikipedia before his 2012 arrest. He is credited with opening up the Syrian Internet and extending online access and knowledge to the public. According to the European Parliament, his detention is part of Syrian government's efforts to restrict access to online communities and stifle freedom of expression in the country.

On social media, Creative Commons is taking the lead in asking for Khartabil's whereabouts:

In this video, Wikipedia founder Jimmy Wales calls for a global protest on March 19 as part of the #WhereisBassel campaign:

On freebassel.com, a website set up by Khartabil's supporters, Wales further explains:

Today is March 15th. This is an important anniversary for two reasons. For the world, this is the fifth anniversary of the beginnings of the Syrian conflict. For me personally, and a lot of the other people who are in the Wikipedia movement, the open source movement, it's the fourth anniversary of Bassel's detainment in Syria. Four days from now we're going to be holding protests in many different cities around the world. You can see the list here on the website. The real question we're trying to put out to the world, the message that we want you to carry to your friends, to your family, to the media everywhere is: “Where is Bassel? We need to know what is going on with Bassel.”

Protesters are being encouraged to create life-sized cardboard cutouts of Khartabil and pose with him, hug him and take selfies.

Supporters are also being encouraged to show their support, wherever they are:

We would like you to protest in your own cities, offices etc..

Khartabil was arrested on March 15, 2012, on the first anniversary of the start of the Syrian revolution. He was interrogated and tortured for five days by Military Branch 215 and was then transferred to the Interrogation Division Branch 248 and detained incommunicado for nine months.

On December 9, 2012, Khartabil was brought before a military prosecutor without an attorney present, and charged with “spying for an enemy State”. He was then sent to the Adra Prison, where he was held until his disappearance on October 4, 2015.

On November 12, 2015, Khartabil's wife, Noura Ghazi, reported a rumor that her husband had been secretly sentenced to death by the Syrian government. This information was never confirmed, and those close to her believe this may have been communicated to her as a scare tactic.

Meanwhile, friends and supporters continue to ask #WhereisBassel and to wonder what has happened in the five months since his disappearance.

She also shares this tool to share Khartabil's tweets. She explains:

This site is a framework that uses the public archive of Bassel’s tweets to bring his voice back into contemporary conversation. By reading, quoting, and sharing his words from the past, we can make him more present today, and work toward a future in which he is free and this site is no longer necessary.

On Saturday March 19, the FREEBASSEL Campaign is joining forces with the Jimmy Wales Foundation for freedom of expression to create a #WhereIsBassel day of awareness. They are asking supporters and friends of Bassel to create masks for Bassel and take selfies and share it online. You can print the masks and share the selfies on this Facebook page: https://www.facebook.com/events/199940690370370/. Be sure to share on Twitter using #WhereIsBassel.

To learn more or support Bassel, attend a public event, visit the website (freebassel.org), or tweet the above image using the #WhereisBassel hashtag.