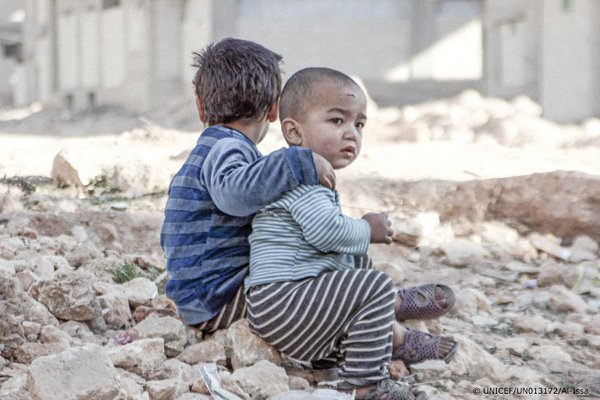 “3.7m #childrenofsyria under 5 have known nothing but a lifetime shaped by war,” tweets @UNICEF.

Today marks the fifth anniversary of the start of the Syrian revolution, which has turned into a bloody civil war estimated to have claimed the lives of up to a quarter of a million people.

And while the number of those killed since the protests started in Syria are disputed, the Syrian Observatory for Human Rights says more than 270,000 people have been killed in Syria's five years of conflict. The observatory provides other staggering figures of the toll on Syrians this revolution-turned-civil war has had so far: 2 million people have been injured, many with permanent disabilities, and 11 million Syrians have been internally displaced or forced to flee the war-torn country altogether.

This video of the first protest which took place in Damascus on March 15, 2011, shows scores of people marching and chanting: “Where are you Syrian?” in a rally call to encourage more protesters to join them to demonstrate against the regime of Bashar Al Assad, which met protesters with bullets, barrel bombs, mortar and aerial bombardment and chemical attacks.

The narrator says this was the first anti-regime protest and that Syrians of all sects, including Sunnis and Alawites, were involved. Protesters are also heard chanting: “Allah, Syria, and only freedom!” and “Peaceful! Peaceful!” indicating that they were after a peaceful revolution. But that was not to be. As the protests got out the regime's control, Jihadists from around the world, bankrolled by money from oil-rich Gulf countries, rose to protect their Sunni brothers against the onslaught of the Alawite rulers of Damascus. Those fighters formed the nucleus of what was to later on become ISIS, which has carved itself an Islamic caliphate across Syria and Iraq. Meanwhile, Iran and Lebanese militia group Hezbollah came to the rescue of the Assad regime, followed by the Russians, who just announced the withdrawal of their land troops yesterday while maintaining airstrikes.

Amnesty International tweets the following infographics to illustrate the price Syrians had to pay:

A Syrian Flees his Home Every 20 Seconds

Every 20 seconds a Syrian is forced to flee their home. #withSyria #Syria #Syria5years https://t.co/eg5l8jBHaF pic.twitter.com/3yr5wSwyvC

Five People are Killed in Syria Every Hour

5 people are killed in #Syria every hour. This MUST stop now. Stand #withSyria! https://t.co/xFogHIM9BF pic.twitter.com/DRfSoJWyxD

35 People Disappear in Syria Every Day

One in Every Three Syrians Live Under the Poverty Line

According to the World Food Organisation:

Today, 1 in 3 Syrians live under the poverty line. We are standing #WithSyria. #IamSyrian pic.twitter.com/KyagOa2FuK

And Unicef shares this drawing by a Syrian refugee describing his plight and that of his people:

Today's anniversary is being marked on social media under the hashtag @withSyria, which shows many people lending their support to the campaign which encourages supporters to take photographs of themselves with their hands folded like a dove (sign for peace).

Even former US secretary of state Madeleine Albright got on the bandwagon:

Today marks 5 years of tragedy for the Syrian people. They deserve our protection and support. I stand #withSyria pic.twitter.com/ZcZnsrKhkP

Others are using the hashtag #FIVEyears calling for an end of the war in Syria:

And Syrians are back to the streets to claim their country and revolution back. Activist Hadi Al Abdallah shares this photograph taken today at Kafranbel:

Kafranbel, a small Syrian town in Idlib, has had massive media coverage since the start of the revolution, thanks to the photographs and videos its activists share of protesters carrying banners, like the one above, addressing the world.

Here are more photographs of Syrians protesting across the country to mark their revolution's fifth anniversary:

#TheRevolutionContinues #Syria demonstrations against #Assad, every photo is taken from a different city.
2016/03/11 pic.twitter.com/z7yPBne4hU

#TheRevolutionContinues #Syria demonstrations against #Assad, every photo is taken from a different city.
2016/03/11 pic.twitter.com/naX4YguC42

#TheRevolutionContinues #Syria demonstrations against #Assad, every photo is taken from a different city.
2016/03/11 pic.twitter.com/S6XIjZGbwL