For 237 Weeks, Maheen Taseer Never Gave Up Hope Her Kidnapped Husband Would Return 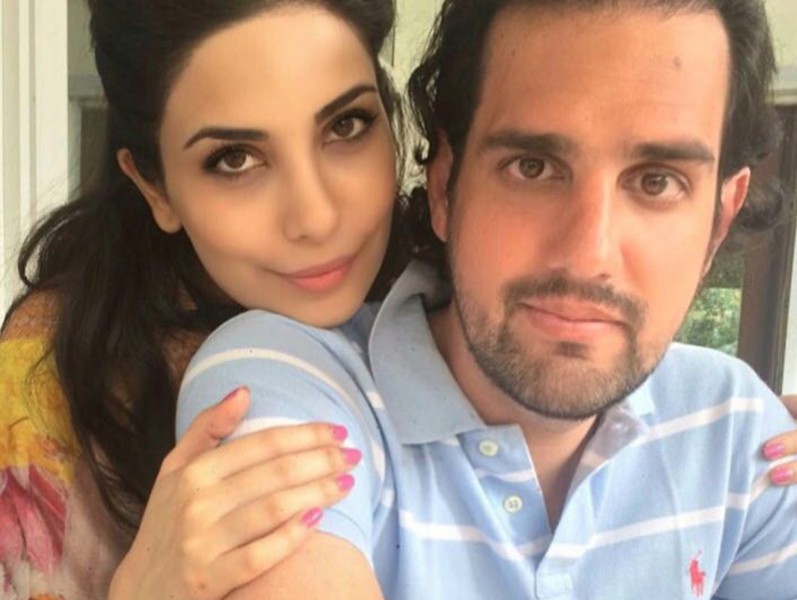 Maheen and Shahbaz Taseer. Photo courtesy Maheen Taseer and used with her permission.

March 4, 2016, marked the last Friday that Maheen Taseer had to spend without her husband. Anyone who followed her updates on Twitter or Facebook knew that Friday was the hardest of all days, as that was the day of the week when her husband had been kidnapped from Lahore, Pakistan. They had only been married for a little over a year when it happened.

The long five-year wait came to an end on March 8, International Women’s Day, when Shahbaz Taseer was found in Kuchlak town near Quetta, the capital of the Pakistani region of Balochistan.

Reports say Shahbaz was being held by militants, although it isn't clear by which group. The circumstances of his release are also under debate — whether he was rescued in a raid by authorities or was released as part of a settlement of some kind.

But this isn't a story about all that. This is a story about love, unimaginable grief and a joyful reunion for a family that has been through a lot.

‘There has only been one prayer on my lips’

In the past, rumors had circulated regarding Shahbaz’s release. This time, when the news broke it was confirmed by General Asim Bajwa, director general of Inter-Services Public Relations, the military’s public relations wing, via Twitter:

Upon hearing the news, Shahbaz's wife Maheen tweeted the number of days her husband had been missing, with a short prayer in Arabic that is typically recited to ease hardship:

There is no god but Allah, Be Thou Glorified! I have been a wrong-doer.

Shahbaz is the son of former governor of the Punjab province, Salmaan Taseer, who was murdered by his own bodyguard over his critical stance on Pakistan’s blasphemy law. Shahbaz had been kidnapped months after his father's assassination, and his dramatic release came a week after the hanging of his father’s killer, Mumtaz Qadri.

The family was made to endure painful speculations and never-ending questions since, such as in 2013, when a few media outlets falsely reported that Shahbaz had been killed in a drone stroke.

Regardless of the rumors, his mother Aamna and wife Maheen never lost hope:

The media/newspapers only print false stories about our family and Shahbaz. I wish there was some concept of liability.
— Maheen Taseer (@MaheenTaseer) March 4, 2013

Every Friday, Maheen would ask people to pray for her husband's safe return, share verses from the Quran, and publish quotes that kept her going as well as letters from her father. Each week had a number, and that number would go up on all the mediums she shared her thoughts on, week after week:

230 Weeks- Its also our wedding week- 6 years mA yet we have only spent one together. To many more in health. Ameen pic.twitter.com/2tRtYN71ae

Today marks the 200 Weeks that Shahbaz has been in captivity. First Roza, First Sehri & First Friday. Please pray for him. May Allah be kind

During this long period, Maheen established her fashion label Maheen Ghani Taseer (MGT) and dedicated an entire collection to her husband:

Shahbaz’s mother Aamna also counted the days since her son’s abduction, often sharing photos of his childhood and praying for his safe return:

From the little acorn grows the mighty oak. May Allah be with you and end this ordeal my son @ShahbazTaseerpic.twitter.com/hMYxXGXUSV

‘Fear can hold you prisoner, hope can set you free’

General Bajwa shared photos of the reunion between Shahbaz and his loved ones:

As for Shahbaz, he finally broke his public silence on March 9 when he posted a status on his wife's Facebook account announcing his return:

On Twitter, he made a comeback with a quote:

Fear can hold you prisoner, hope can set you free – good to be back

According to some reports, Shahbaz was said to have paid 350 rupees (3.3 US dollars) for a meal after kidnappers dropped him at a local hotel in Kuchlak, Quetta. Shahbaz took to Twitter to clarify his position with some of his signature humor (nehari is a local meat and gravy dish):

Just to be clear.. I never ate anything for 350 rps first meal was nehari #lahoriforlife #taseerforlife
— Shahbaz Taseer (@ShahbazTaseer) March 14, 2016

A family friend, writer and actor, Mira Sethi expressed her joy via a Facebook note:

My family and I met Shahbaz today. The story is his to tell. And it is a story that will inspire millions. But I will say one and two and three things: Shahbaz Taseer is a living, breathing, jokes-cracking, irony-appreciating, hope-giving, immensely lovable, resilient, intelligent, weathered, transcendent human being.

Shabby's return is the shedding of an old and hardened Pakistani cynicism. It is the embrace of an equally frenzied Pakistani hope.

It is the sloughing off of a psychological tiredness. It is the embrace of life.

It is also an understanding of the capriciousness of the State.

It is an appreciation of one man's courage, his father's legacy, his mother's love, his brothers’ loyalty, his sisters’ courage, his wife's grace, his friends’ endless, praying hope.

Meanwhile, Maheen couldn't be happier, writing “My heart is home mashAllah” and sharing a photo on Facebook of her hugging her husband: 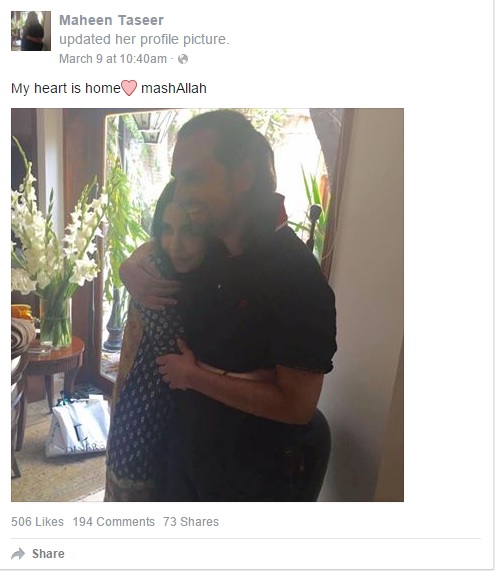