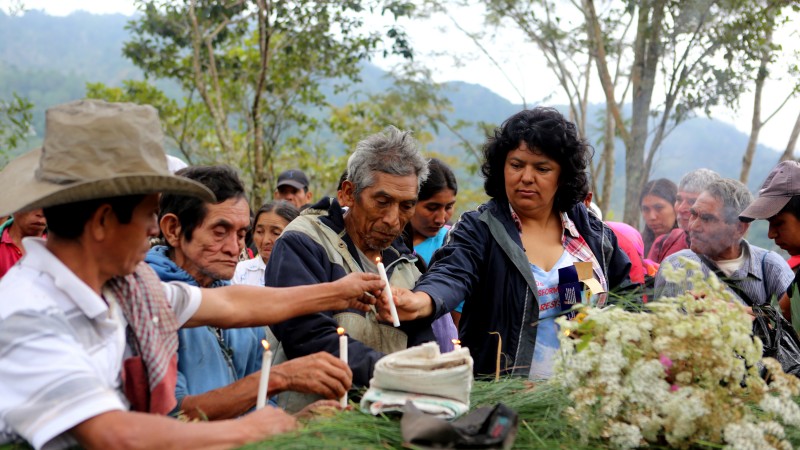 Berta Cáceres in Río Blanco, Honduras, joined by other members of the Lenca indigenous community in a ceremony commemorating the comrades killed in the battles between the Honduran government and multinational players. Berta Cáceres spent years leading their struggle until her murder at the beginning of this March. Photograph from the Goldman Foundation, a group devoted to environmental causes.

The murder of Berta Cáceres is part of a large and growing number of indigenous and environmental activists being killed in Honduras. The country, one of the most violent on the continent, is home to ongoing struggles over the protection of lands, equality among citizens and respect for native communities. That is why to understand the death of Cáceres, along with too many others throughout the region, you have to look at the wider context in which the violence is occurring.

The morning Berta Cáceres was assassinated, her friend Hedme Sierra Castro was at a conference advocating freedom of expression: the Internet Freedom Festival in Valencia, Spain.

The walls of the collaborative space, where more than 800 anti-censorship activists from around the world were meeting, soon filled with posters paying homage to the indigenous leader and human rights and environmental advocate. 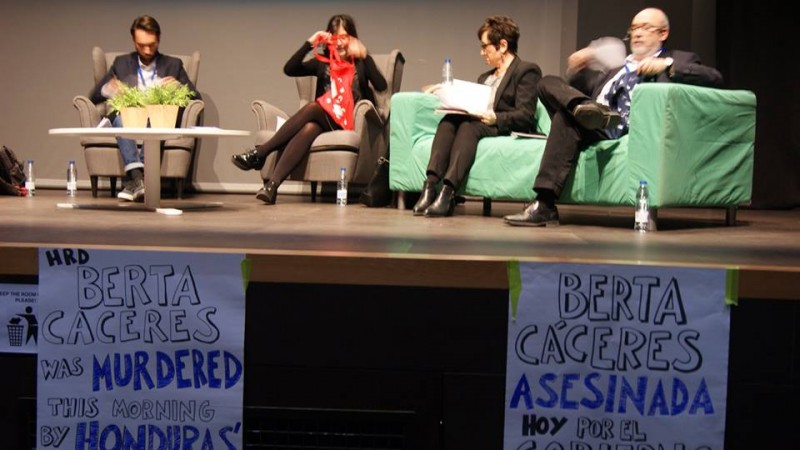 “Berta Cáceres was murdered this morning by the Honduras government.” Posters put on display during the Internet Freedom Festival held in Valencia, Spain. Photograph shared by ACI Participa and published with permission.

Our dear Berta was beloved across all Latin America and she was a very important figure in the world, as evidenced by the recognition she received following her death. She was very close to my family since the coup [of 2009]. We worked together in defense of human rights in Central America, a region that is a barometer of impunity, with a lack of protection for citizens, a lack of accountability in the powerful elite, and attacks on social movements…

Hedme Sierra Castro, a systems engineer coming from a well-known family of Honduran human rights advocates, has been working since 2009 in digital security with a gender focus. Her organization ACI Participa is dedicated to helping women's groups, journalists, indigenous peoples, farmers, the LGBT community, and other human rights advocates to protect themselves from the surveillance and persecution that are increasingly taking place on digital channels:

What all of these groups have in common is that they are at risk, monitored and pursued by the state and other groups.

A climate of lawlessness that violates the rights of citizens

The assassination of Cáceres and other activists in the region can be better understood with an eye on the political context of Honduras. The story of Hedme and her family is another case in point. Hedme and her relatives constitute an at-risk group, in as much as the Inter-American Commission on Human Rights takes certain precautionary measures on their behalf. But that does not necessarily translate into more safety: “Bertita also had [these protections] and that didn't help her at all…”

It's all linked to the political events of 2009. In that year, a coup d'état carried out by Roberto Micheletti against the government of Manuel Zelaya sparked large popular protests. However, judicial proceedings against the participants soon followed. Hedme, along with her mother, father and godfather (founder of ACI Participa and the first ombudsman of Honduras) took part and played key roles in the movement. Hedme says the mobilization was an illustration of the inequalities in Honduran politics and showed how, against all odds, the Honduran people who took part gave each other strength:

We gathered, thousands of people from around the county, over three consecutive months. The atmosphere was festive. With people bringing snacks to share, others bringing coffee, sharing everything, where one person could eat, three would eat, when one person would fall, the rest would help. We would disperse and then soon we would meet again in another place, the streets were a shared space and a hub to unite. Those were full days, like a job, we would leave home at 7 in the morning and wouldn't return home until night. That joining together in brotherhood and sisterhood was so beautiful, and when later the Arab Spring and the 15M movement [in Spain] burst onto the scene, we saw ourselves reflected… Tahrir stirred up everything we had lived through.

Just like in Tahrir, the Liberation Square that spearheaded the Egyptian revolution in 2011, the heavy hand of the repressive government came down on the protesters months later:

They carried away protesters in pickup trucks and they were ‘disappeared,’ people would chase after the pickups to see where they were taking our comrades.

The background to the conflict centers around the corruption scandals of 2008. During that year, the Public Prosecutor's Office discovered hundreds of documents that implicated senior officials, among them ex-President Carlos Flores and his uncle, business mogul Miguel Facussé. Both were blamed for assaults on rural families in Bajo Aguán, in northern Honduras, to forcibly vacate lands and use them as part of their project cultivating seeds for African palm oil. The forcible evictions left thousands of people living in tents, displaced from the territory they had inhabited and worked for generations.

The role of the prosecutors, after uncovering the documents, was key in what Hedme describes as “the dawn of the [Honduran] popular social consciousness.” In March 2008, the public prosecutors began a strike, which was joined by well-known figures in Honduran society, among them the Jesuit activist priest Ismael Moreno Coto, the singer and storyteller Karla Lara, and numerous defenders of human rights:

The people accompanied [the prosecutors], they organized cultural events around them, they never left them alone… Those 35 days of hunger strike strengthened our social consciousness, although they were not able to stop the coup.

[Roberto] Micheletti lost the elections. He led the coup d'état on Sunday morning and by evening he was assuming power. We had seen him in the plaza, months earlier, dismissing the strikers. ‘How many are they, 300?’ he said, pointing down at us with disdain. ‘Three hundred people are not going to ruin my political career.’

The outcome of these power struggles led to new elections, in which Porfirio Lobo emerged as the winner, although many national and international bodies have refused to recognize his government. Roberto Micheletti, meanwhile, delegated the government administration to the Council of Ministers in 2010.

The list of those responsible is long… and powerful.

State institutions, large business groups, armed forces, the police. The list of those responsible for Berta Cáceres’ assassination is long, according to theHonduran Platform for Human Rights Organizations.

The Platform directly accuses the Energy Development Company SA (Empresa Desarrollos Energéticos Sociedad Anónima, or DESA), a stakeholder in the Agua Zarca hydroelectric project. Also to blame, they say, are the banking institutions that financed the project, the municipal corporations of Francisco de Ojuera, and the military police. Before her murder, Berta herself had pointed to the DESA board and the municipal president as the people responsible behind numerous threats against herself and her community.

Cáceres led a bold fight against the construction of a hydroelectric dam in the Gualcarque River in the state of Santa Bárbara in northeastern Honduras. The construction put at risk access to water for the Lenca indigenous community, to which Cáceres belonged. As a result of the strong resistance movement in this community — including road blocks to hinder access for construction machinery — the project was halted. However, the Lenca community was victim of many violent acts. Several of Berta's colleagues were threatened and killed in the process.

“The murder of Doña Berta is a very hard attack on social movements, not only in Honduras but in all of Latin America,” explained the Mexican activist known as Anamhoo, hours after the assassination, to the other participants of the Internet Freedom Festival:

Our Mexican colleague Gustavo Castro Soto was with her when she was shot, they injured him, a bullet hit his ear and he began bleeding from his head, the killers left him there, given up for dead. That saved him. If they didn't care that Doña Berta was with someone as well known in the region as Gustavo, a key leader in the fight against mining and hydroelectric companies and founder of Otros Mundos Chiapas, that means they feel untouchable.

Gustavo Castro Soto is also a recognized Mexican leader in defense of environmental rights. For having been the sole witness to the murder of Berta Cáceres, Castro Soto has been detained in Honduras while the investigation iscarried out. However, allied organizations for environmental causes and human rights fear for his life and demand that Castro Soto be allowed to leave the country. Follow these reactions with #SeguridadParaGustavo (#SafetyForGustavo).

In addition to asking for accountability from the Mexican and Honduran governments, the Latin American participants of the festival appealed to the conscience of the anti-censorship community and the need to question the processes of North-to-South exploitation:

How is it that we are here talking about technology, privacy and digital security, yet we aren't emphasizing the fact that this technology is built on a base of human exploitation in the Global South? Technology is made in a very concrete way. How will we liberate it if we do not liberate the ways in which it is built?

‘We have arrived at a point of extreme polarization and dehumanization’

When asked about the future, Hedme has doubts:

It's very difficult to think beyond the current polarization. Since the coup, either you are ‘resistance’  (‘ñángaras‘ [leftists], ‘bums’, or ‘riffraff’, to the coup leaders), or you are blanquito, (whitie) as we refer to the perpetrators of the coup, the institutions and private companies that supported the coup, for the white shirts they wore during their rallies.

They carried posters thanking the United States and they shouted slogans such as ‘We have saved the Constitution’ and ‘We defend our president, who gives us livelihood and quality of life.’ Along with them were many forced laborers, some of them from Facusse's company, who had been ordered to not speak with journalists, and to say only positive messages about the president. Either you attended their rallies, or you were with the ‘riffraff’ (la chusma).

The segregation and dehumanization got to such an extreme that some doctors quit attending to those injured during the mobilizations. That's why it's difficult to think about the future… and to look at the past. One learns. Learns to live day to day.