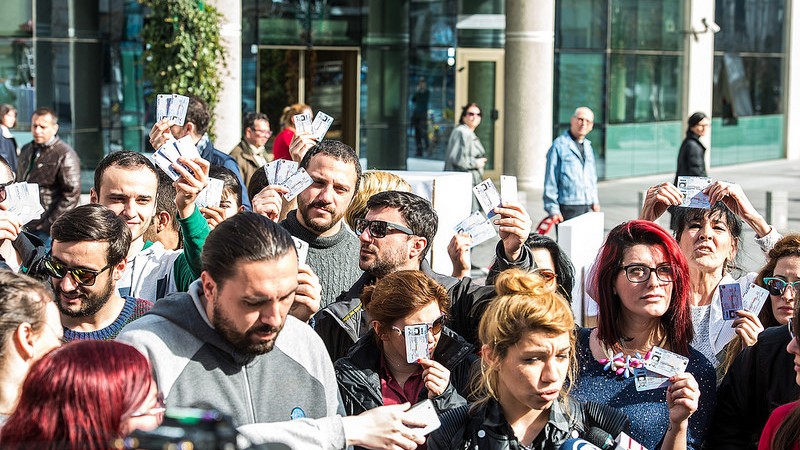 Less then a week after the Macedonian State Election Commission (SEC) introduced a feature on their web app that allows citizens to report irregularities in the Voters’ Registry online, they are shutting it down.

In the time between the feature's publication in the beginning of the month and March 13, around 5,000 people had submitted suspicious data. The official reason for stopping the online reporting feature, according to the SEC, is because they apparently had too much work pouring in from it and not enough capacity to deal with it:

“It takes time for the SEC to properly analyze the reported irregularities and compare them with the cross-checked data in order to determine which cases should be subject of spot check,” the SEC said in yesterday's official statement.

The SEC is tasked with thoroughly cross-checking the Voters’ Registry with databases from 10 other institutions including the Ministry of Interior, the Public Revenue Office, the State Statistical Bureau, Employment Agency, and National Bank.

The results of the cross-checking of the registry will be discussed at a public meeting on March 16, and immediately afterward that they will start preparations for spot-checks — when SEC representatives drop by addresses where people have reported irregularities.

In its announcement of the reporting tool's shutdown, the SEC added that all citizens who want to report irregularities in the Voters’ Registry can still do it, but only in person at their offices across the country.

Election fraud has been suspected for years Macedonia. However, authorities are only now investigating allegations that government workers interfered with voting to ensure victories for the ruling party, VMRO-DPMNE, as part of an agreement to end the country's political crisis.

On March 3, the SEC published a new version of the web app, which allows users to confirm their status in the Voters’ Registry, after several weeks of it being unavailable due to security issues. Citizens soon began combing the data for phantom voters, posting evidence to social media of unknown names being registered at their homes or of dead relatives or acquaintances still being listed.

On March 9, the SEC released the new feature that allowed these citizens sleuths to report the irregularities online instead of having to do it in person. Four days later, they announced they were shuttering the tool because they were receiving too many reports.

‘This will discourage reporting by citizens’

This decision triggered fierce reactions among the online community. On Facebook, Nebojsa Gelevski, an activist and a designer from Skopje, publicly asked “What’s wrong with the SEC?!” and claimed that not even 10% of the people who want to report irregularities would actually do it in person:

Instead of reporting online, we now have to search for the obscure SEC offices?! This will discourage reporting by citizens, not even 10% of those who have complaints would put in the effort to go to the field offices. This act makes SEC work easier, but is completely opposite to the goal of cleaning the Voters’ Registry

Others reacted on Twitter, saying that the decision was unnecessarily rushed.

They are shutting down the online reporting of #AllFromTheList on SEC's website. We've been waiting for a census for 12 years and now they are rushing to formally close the cross-check in two weeks *applause*

It's actually been 14 years since the last complete census, which took place in 2002. That count set the number of inhabitants to just over 2 million, making the total of registered voters in the country — 1.8 million — suspiciously high. Macedonian law requires that the government conduct a population census every 10 years, but in 2011 authorities stopped the census mid-way without providing a reason why.

Civil society organizations monitoring the clean-up of the Voters’ Registry before the early general elections in June fear that the shutdown of the online reporting tool will represent a serious dark stain on the whole election process.

On the other hand, Prime Minister Emil Dimitriev, who replaced Nikola Gruevski in January after he stepped down, said all reports of issues with the Voters’ Registry should be examined by the SEC, but he also accused the opposition of “hyping” the registry clean-up:

We welcome all reports from citizens regarding the voting registry. They need to be well argumented [sic] and they will help contribute to quickly clearing up this hype that is being developed over the examination of the voting registry. The State Electoral Commission knows its jurisdiction and it will consider all relevant laws and regulations. At my meeting with the SEC on Thursday I was informed that these reports will be examined in a very short period of time, because the deadlines to respond to each of them is between three and five days.