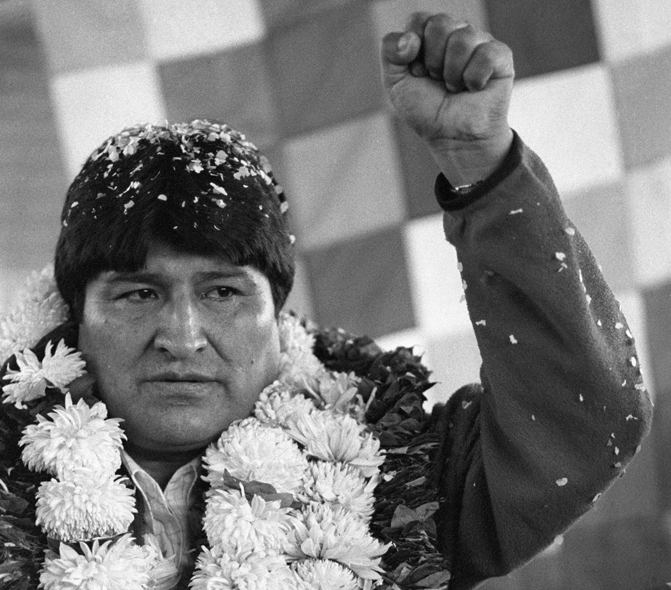 Evo Morales after his election in 2006. Photo by Jorgeuzon via Wikimedia Commons. Released to public domain.

Bolivian Internet users are debating the political value of social media in response to president Evo Morales’ proposal to “regulate the social networks.”

Morales publicly described social networks as “instruments of imperialism” that can “bring down governments” last month. He compared them to a “garbage collector,” suggesting that the networks are used only for defamation and slander.

Morales made these declarations during the week of February 22, 2016, following a public referendum on Bolivia's constitution that could have enabled him to run for a fourth term as president. A carefully monitored vote count concluded that 51.27% of Bolivians rejected the constitutional reform, thus barring Morales from seeking reelection.

The former coca leaf farmer and union leader originally took office in 2006 and is Bolivia's first president of indigenous origin. His third and final term will end in 2019.

This isn't the first time that the Morales government has expressed its disapproval of social media.  On previous occasions, vice president Alvaro García Linera stated that social networks should be monitored, and also noted the names of individuals who had insulted the president on social networks.

But the topic of regulating social networks didn't take concrete form until a February 2016 press conference in which Víctor Borda, vice president of the Chamber of Representatives, described a draft bill codifying three crimes that would sanction social network users that “commit irregularities”: violation of personal information; negatively affecting another individual's honour (i.e. defamation) on social network sites; and the creation of fake accounts with the objective of stealing information to commit crimes. Borda also mentioned the prohibition of anonymity and the establishment of a national council that would control social networks.

A ‘dirty war’ on social media?

The lead up to the referendum took an unexpected turn for both Morales’ party (Movement towards Socialism, known as MAS in Spanish) supporters and the opposition during the month of February. A series of surprising revelations spread across networks including Facebook, Twitter, and WhatsApp, giving rise to intensely negative confrontations between MAS party supporters and citizens opposing constitutional reforms.

First, critics of MAS expressed concern about a corruption scandal involving Bolivia's Indigenous Fund. Then, frustration intensified when a Bolivian journalist exposed a previously unknown relationship between president Morales and a woman with a senior position in a Chinese company which happened to have contracts with the state worth millions of dollars. It was also revealed that Morales and the woman had a child together in 2007.

Only days after these revelations, six municipal employees in the city of El Alto died of smoke inhalation while trapped inside a building set ablaze amid violent protests. Protesters denounced infiltrators in their midst who they said were responsible for setting the fire. The lack of police response, and conflicting versions of events regarding the motivations of supposed infiltrators, caused even more indignation, all of which could be seen in messages and posts that quickly spread through social networks.

Government representatives and MAS supporters have since decried a ‘dirty war’ on social media against the “Yes” campaign for the referendum, in which fake news, defamatory publications, and personal information about the president, his ex-girlfriend, and his son, were spread by users opposing constitutional reform.

The bill to regulate social media

The proposed social media regulation as outlined by Representative Borda, has yet to be published in its entirety. The three types of crimes outlined by Borda are the only proposed articles known at present. Vague language and overly broad scope used in these alone has left citizens concerned about the law's implications for free expression.

The second crime included in the law proposal refers to negatively effecting the honour of an “individual, or public or private collective.” Javier Pallero, an Argentina-based public policy expert writing for digital rights group Access Now, expressed his concern in a document analyzing this legislative proposal, stating that such a definition of a crime is too similar to the crime of contempt, or defamation of a public servant performing their duties, particularly given the political context in which the bill is being proposed.

The last crime is also problematic. Instead of resolving the problem which it intends to address — the crime of registering fake profiles with malicious intent — it creates additional legal ambiguities regarding daily interactions in Internet usage. The proposal suggests that individuals who “design, develop, traffic, sell, carry out, program, or send a webpage, links, or emerging pages with the aim of contacting or obtaining information” could be subject to jail time. As Pallero notes however, if the intention of the bill is to punish crimes such as fraud or human trafficking (which are already included in the country's criminal code), then it would be more effective to train police or public servants to investigate cases that involve the digital transfer of information.

Borda also announced that, upon approval of the bill, Bolivia would establish a national council with the authority to “control” social networks, and that all network users would be obliged under national law to identify themselves. Without access to the actual text of the bill explaining how this would work, Pallero worries that the policy would endanger the right to anonymity.

Public response to the proposed regulation was swift. News of the president's declarations on social networks and Borda's draft bill spread quickly, online and through the media, together with commentaries condemning the move and reflections on the inexorability of the right to freedom of expression in the digital age.

GIF of the caricature of the minister of government, created by Joaquín Cuevas.

At least two government representatives have already voiced disagreement with the measure to curtail freedom of expression on social networks, the Ombudsman and the vice president of the Supreme Electoral Tribunal, stating that instead of limiting expression it is more important that the public is well-informed about proper usage that doesn't put in danger the individual rights of citizens.

Nevertheless, recently two cases of government backlash against social network usage attracted public attention. One centered around allegations that military officials had sought to limit use of social media within the armed forces. In another instance, a Bolivian caricaturist received a phone call from the government to inform him that “they had not liked” a GIF which he had published (see graphic above) which featured the minister of government.

Users of Facebook proposed creating spaces for debate within a group already known for their cyberactivism activities. The group began to share information about the regulation of social networks and launched the hashtag #RedesLibresBO [FreeNetworksBolivia] to promote debate surrounding the principle of free expression. The group has already organized three public debates on the matter: one online, one in person in La Paz, and another in the city of Cochabamba. The goal is to stimulate discussion about what it would mean to regulate social networks and to debate the necessity to draw up a citizens’ proposal for such regulation.

A couple of days after the bill was proposed, the president declared that he “would respect” social networks because they are a “right of communication”, while reiterating his concerns about the way that they are used. The following day, the Ministry of Communication shared two images on Twitter which show president Morales with this message:

We will respect social networks, communication is a right, but it not correct to send whatever kind of message against any other person, this is very harmful. #SocialNetworks in #Bolivia, President #EvoMorales

The second image includes the statement:

We respect social networks, communication is a right; we should debate how to avoid defamation and slander. President #EvoMorales, #SocialNetworks in #Bolivia.

The same day, the Minister of Education declared that they would start a campaign throughout the school system to promote “values and good writing skills” for social networks.

Despite the momentary relief that Morales’ statements brought to social network users, it is important to monitor this situation carefully and to analyze the final draft of the bill, if it does end up being formally presented. Perhaps even more interesting will be the ensuing public debate, given the declarations made by the president against social networks and what they have revealed about Bolivian Internet users’ values when it comes to online speech.

In this light, users involved in the #RedesLibresBO [FreeNetworksBolivia] campaign have proposed that citizens move ahead with discussions of self-regulation, anonymity and the regulation in general.

“In the game of the social networks, the rule is knowing how to play”.  A GIF by the movement #RedesLibresBO

It is also worth pointing out that laws are not the only mechanism through which online behavior can be regulated. If the Bolivian government were truly worried about misuse of the web for the spreading of “lies”, a more productive proposal might be a policy to equip citizens in the proper use of these technologies. This training could be based around the abilities to search for, organize, understand, evaluate, and analyze information online (digital literacy); as well as the abilities to access, analyze, evaluate, and create communications content (media literacy).

In this way, the behaviour of social network users could be influenced without having to resort to punitive legislation, a likely result of which would be the clamping down on freedom of expression. In addition, it would also be beneficial to establish a series of principles, rights, and responsibilities that must be respected under any legislation which might regulate the flow of information on the Internet. An example of this is the Brazilian Civil Internet Framework, an initiative created for the purpose of avoiding acts of oppression. 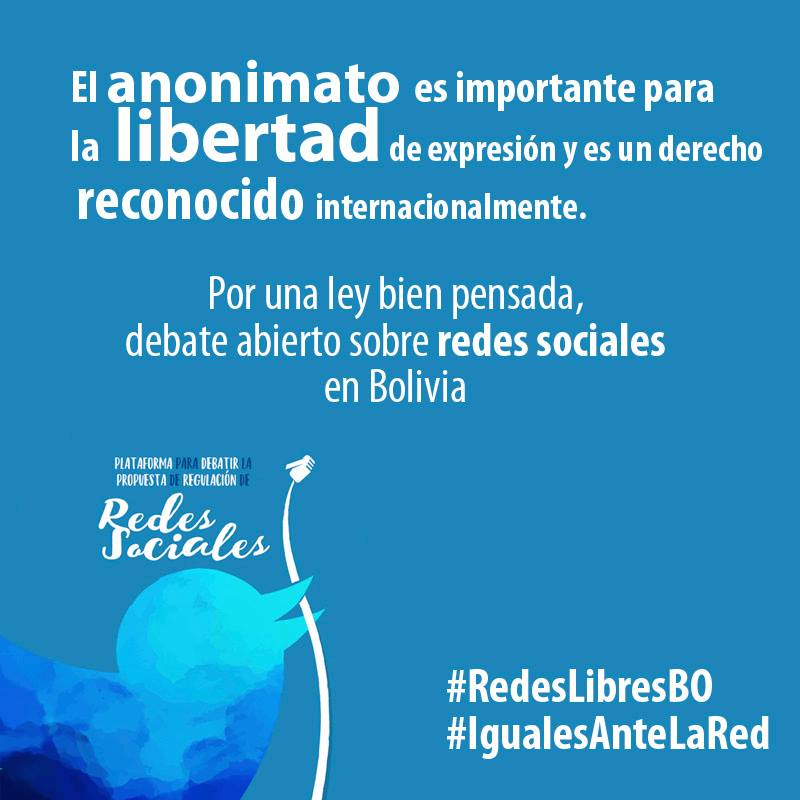 “Anonymity is important for the liberty of expression and is an internationally recognized right. In order to create a well-conceived law, there needs to be public debate about social networks in Bolivia. – Alliance for the Debate of the Proposal for Regulation of Social Networks” #RedesLibresBO [FreeNetworksBolivia] #IgualesAnteLaRed [EqualBeforeTheNetwork]. A graphic by the movement #RedesLibresBO, posted on Facebook.