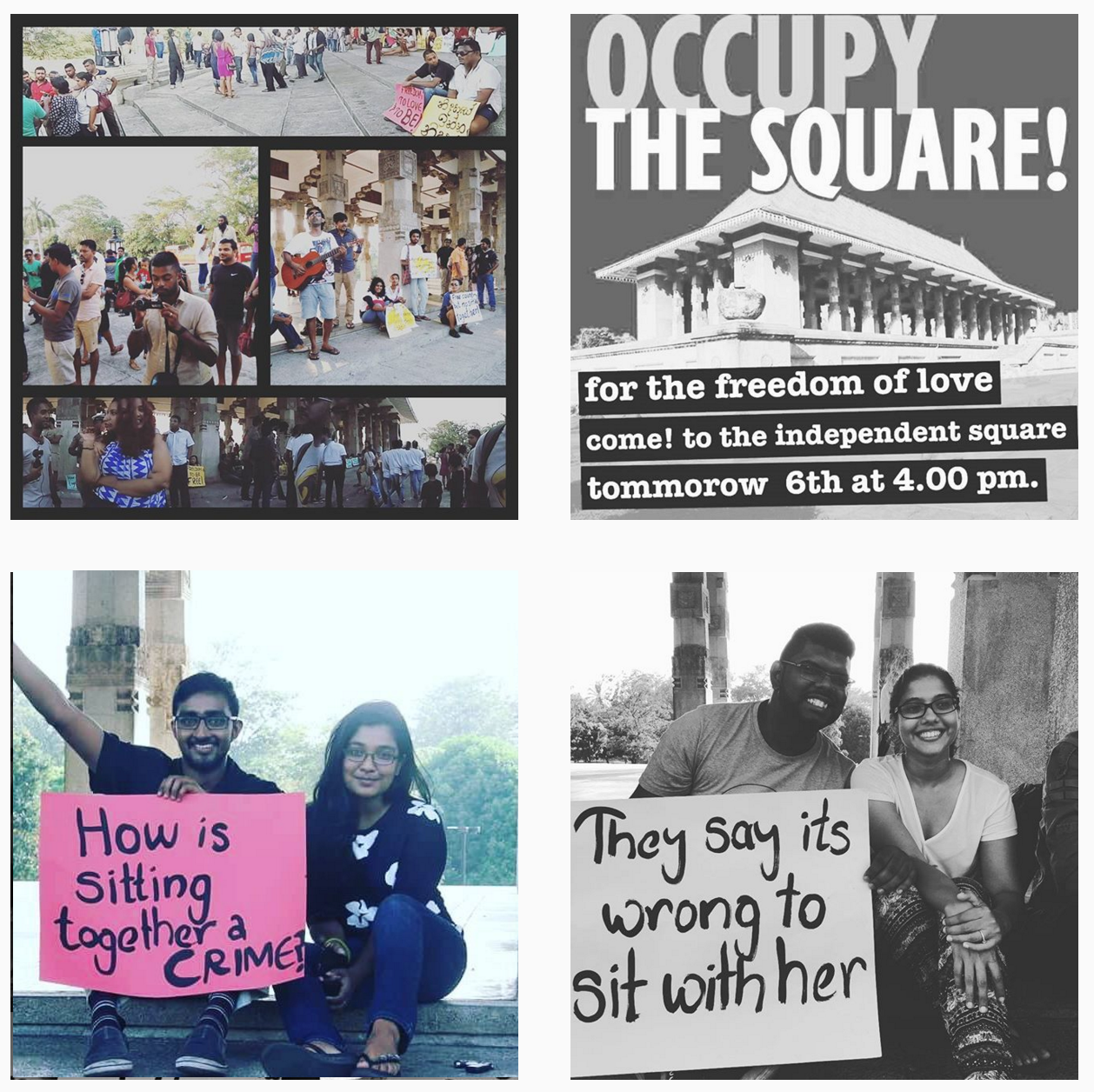 On 6 March, hundreds of people gathered at the Independence Square in the Sri Lankan capital Colombo holding placards against hostility from security guards towards men and women being together in the square.

The #OccupyTheSquare efforts paid off. After the protest, authorities canceled the contract with the government-owned security company and reiterated that people should be able to go to the square without being harassed.

It all started a day before, when Mirshad Buckman from Colombo posted a video on Facebook which went viral (seen more than 182,000 times). The video showed two security officers attempting to shoo Mirshad and his girlfriend out of Independence Square, mentioning that the Cultural Affairs Ministry ordered them to do so:

As the video started making the rounds, someone created a Facebook event, which attracted more than a thousand people to say they would participate, for a protest at the Independence Square, a symbol of Sri Lanka’s freedom.

As per the Occupy Sri Lanka Facebook page, the event was organised by independent, like-minded individuals without any political alignments or organizations behind them.

Maryam Azwer wrote about the significance of the protest for the online portal Roar.lk:

Although Sri Lanka has a reputation for evicting couples from public places such as Independence Square and Vihara Maha Devi Park, this is probably the first time people chose to openly question such actions on the part of authorities, and raise their voices against it.

It is crazy on how the power of social media, can influence a dozen people to silently protest for human rights. #lka #occupythesquare

Today, March 6, 2016, there was a protest of sorts. Well, we could also call it a celebration. It was in a sense a questioning of the meaning of ‘freedom’ that intangible something that's often associated or confused with ‘independence’. It was about, let's say, the right to be, the right to love, the right to show affection and about objecting to those who interpret vague guidelines as per their own understanding of propriety. It's all grey. Anyway, there was quite a crowd.

Some also questioned the campaign:

@thila794 was referring to President Maithripala Sirisena's public call for singer Enrique Iglesias to be punished over the behavior of some of his fans at his concert in December, which including someone throwing a bra at the musician while he was on stage.

Opinions were divided on whether the security guards in question should be punished or sacked. Mihiri Lakshini Weerasena opined on Facebook not to go hard on those two guards:

The blame is on whoever INSTRUCTED the guards, most probably verbally. […] They shouldn't be sacked, scapegoated, or reprimanded. Their behaviour is just a result of an attitude adopted by their higher-ups. The apathy of victims before this, who failed to correct this sort of thing when it first turned up probably only strengthened the ministry's conviction that these sort of orders are ok to give out.

Go to the root of the problem, which is probably with some stone-age man sitting behind a desk at the cultural ministry!

Sri Lankan Deputy Foreign Affairs Minister Dr. Harsha de Silva visited the Independence Square monument on 6 March to inquire about the allegations that security guards were driving away unmarried couples. He reportedly spoke with Prime Minister Ranil Wickremesinghe about it, who then ordered the Culture Ministry to cancel the contract with the government-owned company responsible for security at the Independence Square.

Dr. Silva posted on Facebook that the prime minister has also instructed to remove the director of operations of the security company. He wrote:

This whole episode seem to be divided in some agreeing and others disagreeing with me. However what the whole country sees is that at least there is healthy debate and the government is listening.

The government said in a statement that Independence Square is a public property and the general public can go there and see the monument without any harassment. This is indeed a victory for protesters and all those who supported it.

Jon well done! Hats off to those who initiated #OccupyTheSquare and who took part. Pics: #OccupySL #SriLanka pic.twitter.com/4SoFv47hny

The battle isn't over, however, Maryam Azwer warned:

While it appears that couples can now stay at Independence Square without being harassed by authorities, it is yet to be seen whether or not they will be granted equal freedom in other public areas like Vihara Maha Devi Park.