Lebanese ‘You Stink’ Protesters Are Back on the Streets 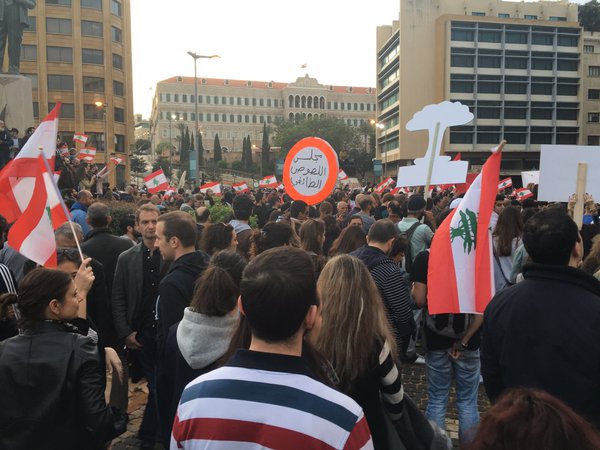 Lebanese protesters are back on the streets of Beirut calling for a solution to the country's mounting garbage problem. Photo credit @monajem via Twitter

Thousands of Lebanese protesters are back on the streets of Beirut today calling for a solution to the country's mounting garbage problem.

Eight months ago, Tol3et Re7atkom (You Stink), a secular movement which has been demanding a “sustainable solution to Lebanon's waste disposal problem”, started protests that were attended by thousands of people across the country. On July 17, the country's largest landfill was closed and trash started overflowing across Beirut as officials continued to mishandle the refuse problem. Rubbish and summer did not go hand in hand, and as the waste bags continued to pile up along the streets of Beirut, the appalling stench poisoned the air, rubbing Lebanese people in the nose.

In a comment on the video, the You Stink movement comments:

The big scandal video.. A harsh parody of the Lebanese Ministry of Tourism recent online campaign “rise above lebanon”. A video showing the brutal reality those corrupt who are in power don't want us to see.. “The last warning” Saturday 12th of March, at 4pm Sassine Square, You_stink and you are killing us..

And it was a final warning. Thousands of Lebanese from all walks of life joined protesters to make their voices heard, not only protesting against the way the government has (not) dealt with the rubbish problem but also against the government's corruption. Global Voices contributor Mohamad Najem shares this video from today's protest:

And Bassem Mroue says the protest is continuing until nightfall:

Habib Battah shares this photograph by Nabih Bulos which shows that the protesters mean business:

You know they are staying late when the ice cream man shows up. #Beirut #Youstink #dessert #activism https://t.co/2GYdGJMeQK

Bulos adds that the protesters are calling for a general strike starting Monday:

Stay tuned for more coverage from Lebanon as this story evolves.