China press freedom was at the lowest level in Reporters Without Borders’ 2015 index. Screen capture.

“In China, a journalist is an occupation for being mocked and menaced,” a former journalist in Beijing once told this author.

From reporters derided by the public for their subservience to the party, to investigative muckrakers intimidated for exposing the darker sides of China’s economic miracle, all journalists in China are hobbled by the absence of a media law defining their rights and responsibilities.

A March 10 press conference for the 14th National People’s Congress (NPC), an annual session of China's main legislative body held in Beijing, threw the debate about China's lack of a comprehensive media law into the public spotlight once again.

A Chinese-American journalist from The China Press of the United States hit delegates at the congress with a barrage of questions:

My questions: the press law has been in discussion for many years, I am wondering if there is any timetable for [developing legislation]? If there is one, could you publish it? If not, what is the reason? Why is it so hard to create a press law for China?

A NPC delegate swiftly brushed the questions aside, however: “Does any foreign journalist want to question our legislature's work? If not, today’s news conference ends now.”

A clip of the exchange broadcasted live on state-owned Chinese Central Television (CCTV) sparked a flurry of commentary on China's Twitter equivalent Weibo.

Wang Zhijun, an investigative journalist, was disappointed by the NPC delegate’s response:

Since I became a journalist in 2000, we have been calling for a press law that can protect journalists and their [right to] interview from pernicious officials. After sixteen years, my younger colleagues are also fighting the same battle. I felt much woe when watching [this clip].

Before posing those questions at the congress, the same journalist raised the case of reporter Zhang Yongsheng, as an example of the deteriorating environment for Chinese journalists.

Zhang Yongsheng, who worked for the Lanzhou Morning Newspaper based in Gansu province, northwestern China, was well-known to locals for his years of investigative reporting.

Zhang was detained by police when reporting a fire accident in Wuwei, a city near the capital of Lanzhou in January.

Despite receiving a warning not to report on the fire, he still set off for the scene, where police were waiting to arrest him.

Wuwei police finally released Zhang on probation after a month in jail, with the provincial judicial department dismissing his sex trafficking charge but insisting on the extortion charge. Zhang was asked to keep silent thereafter.

The provincial judicial department has not offered any evidence of Zhang's alleged attempts to extort or defraud officials to the tune of 5,000 Yuan (nearly $800), despite calls from journalists and lawyers to do so.

The Chinese judicial system is famous for its ambiguity. Defendants are often coerced into accepting their charge as a condition of release or probation.

One of Zhang’s friends said Zhang was tortured physically and psychologically by police during the interrogation.

The news arm of Tencent, one of China's best-known online portals, noted after his arrest that Zhang’s tenacious reporting had in the past ruffled the feathers of a number of local officials.

At the NPC delegate conference in Beijing, Tu Zhonghang, a journalist with the Beijing News, asked for information about how Zhang's case was developing, but this question was also ignored.

The Committee to Protect Journalists, a non-profit organization based in New York, pointed out in its 2015 annual report that there are 49 journalists in jail in China, a quarter of the known global figure of 200.

In a 2009 People’s Daily interview, Zhan Jiang, a professor at the International Journalism and Communication School of Beijing Foreign Studies University, explained some of the factors that have stymied the development of a press law.

The Chinese government, Zhan noted, has been drafting a press law since the 1980s.

After the bloodshed following the 1989 Tiananmen Square protest, however, and the collapse of the Soviet Union, drafting work came to a halt over concerns about potential social instability.

Professor Zhan supports the development of a press law:

The Constitution rules that citizens have freedom of speech, for gatherings, association and publishing etc., which are good principles and rules but difficult to implement [in practice]. The values inherent in a press law can embody the sprit of the constitution and help implement it […] This law can help manage journalism and related social spheres and bestow rights on journalists to interview, report, remark and so on. It also lets journalists take some responsibilities, limiting the damage [immoral or irresponsible journalism] can sometimes inflict on society and citizens. 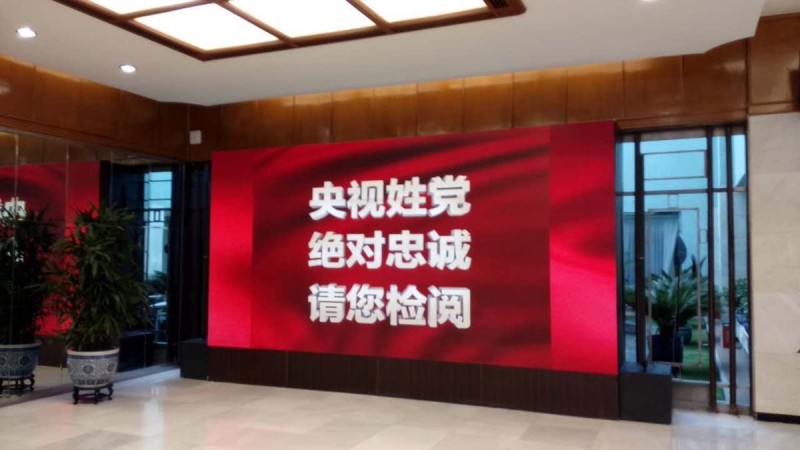 The huge banner says: “CCTV is sticking to the party line. We welcome your review with absolute loyalty.” (Image from Weibo)

Meanwhile, Chen Yun, a former top leader of the Communist Party, believes there is no need to legislate a press law, as it “might allow others to take advantage of us”:

Under the [pre-communist] Kuomintang’s domination, it legislated a press law, we communist party members carefully studied its wording, seized on it and took advantage of it [to gain the control over China by waging information campaigns]. Now we are in power, I think it is better not to allow for the development of a press law that might allow others to take advantage of us. If there is no law, we take the initiative and can control [media] as we want.