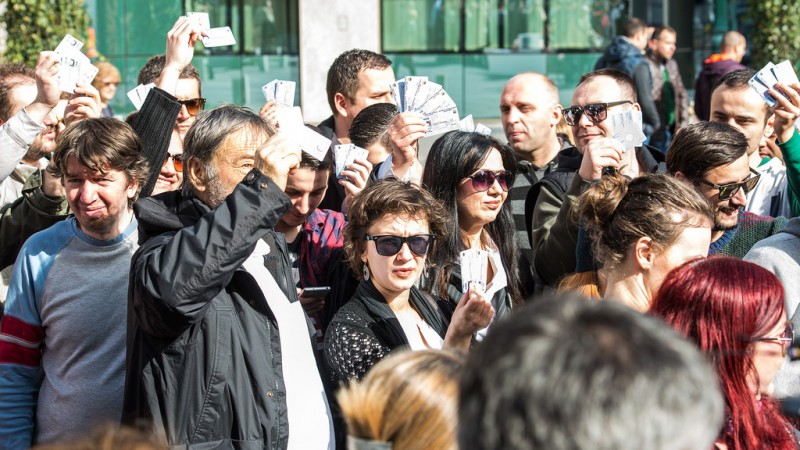 The Macedonian State Election Commission (SEC) has added a new feature to their online Voters’ Registry app, enabling citizens to report irregularities and help the commission in their efforts to clean up the registry.

Overhauling elections is one of the reforms agreed upon to end the political crisis in Macedonia. Authorities are currently investigating alleged election fraud, including the issue of thousands of identity cards to ethnic Macedonians from neighboring Albania, committed in recent years to ensure a victory for the ruling party, VMRO-DPMNE. The country's number of registered voters raises more than a few eyebrows: 1.8 million registered voters with a population of a little over 2 million, as of last census.

The SEC's app lists the names and addresses of registered voters and is used to determine their polling station. After a new version of the app was released on March 3 following a security problem, Macedonians unleashed an avalanche of searches in the registry to identity phantom voters.

They discovered “voters” whom they weren't familiar with registered at their home address or the address of friends, as well as relatives and acquaintances who had died or moved out of the country long ago still registered to vote at their old residences. Macedonians in the diaspora have the right to vote, but only in embassies as part of separate electoral constituencies.

The organization MOST, which among other things monitors elections, called on the SEC to issue clear instructions on reporting suspicious data in the Voters’ Registry. MOST maintains a free telephone line where voters can report election irregularities.

On March 7, the SEC unveiled an additional feature allowing users to report their suspicions. Users can click on a “report” link displayed alongside the records and open a form where they can add more information. According to the commission, several thousand citizens used the reporting feature on the first day.

Screenshot shoving a suspected phantom voter “living” on the address of the U.S. Embassy. The reporting link is at the end of the row.

A registry of ‘haunted’ houses

The Directorate said that they've told the SEC not to use the Unique Master Citizen Number during searches (which is currently one of the search parameters), and to notify people of their right to file a request for the removal of their own addresses from the public list, in a free, timely and simple manner.

Privacy concerns aside, many Macedonians have found the list an important resource to expose evidence of fraud or mismanagement. On Twitter, citizen sleuths are using the hashtag “All from the List” (#СеПоСписок) and including screenshots of their discoveries.

The ghosts can vote up to three times. #Сепосписок

People found buildings, apartments, and houses full of phantom voters, on some occasions with more then a 100 people registered as living in one house.

The hype also attracted jokers. For instance, a parody tweet claimed to have discovered a fake voter named Jessica Alba (like the American actress) using a photoshopped screenshot. Other Macedonians fact-checked the screenshot and quickly debunked it, and such pranks were mostly accepted in good spirit.

The ruling party VMRO-DPMNE has controlled the organization of elections since 2008. In response to the citizen clean-up effort, party officials defended the integrity of the Voters’ Registry or tried to downplay the irregularities discovered.

For example, some Macedonian villages do not have a street system, so residents of whole neighborhoods are legitimately listed at a same address. Party officials or pro-government media workers have highlighted cases of citizens “crying wolf”, mistakenly considering those people as phantom voters. One popular narrative says that even if there are some fake voters, they are very few and cannot reach 200,000 — the difference in votes between the current government and the opposition.

Another explanation offered is that some citizens simply failed to report changes of address and remain registered to their old residences. While this is probably true in some cases, there are “voters” registered as residing in newly built apartment complexes, state institutions and embassies. For instance, the site of United States Embassy, built in 2009, was previously was a barren hill without any houses. Yet people listed at the embassy's address were issued IDs from the Ministry of Interior despite the fact that nobody actually lives there, not even the ambassador.

Citizens have kept combing the Voters’ Registry app, to the extent that it crashed during the night between March 9 and 10. The high number of visits exceeded its bandwidth quota, so the SEC expanded the hosting package to accommodate for it.

In parallel, the Special State Prosecutor has continued to investigate alleged fraud committed in the upper echelons of government during previous election cycles. Authorities searched the home of one of the suspects, a police officer, who is mentioned as “the guy who makes the [fake] IDs” for the ruling party in a leaked wiretaps. Former Minister for Transport and Communications Mile Janakieski, who is a close confidant of party leader Nikola Gruevski, is implicated in that same recorded conversation.