A Syrian Asks Herself: Am I Capable of Killing? 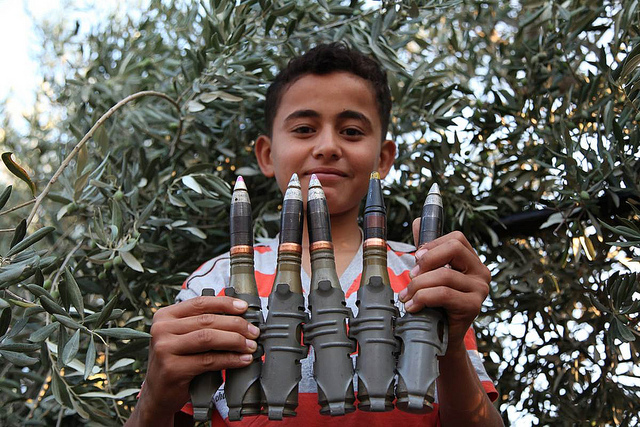 This 2012 photograph shows a Syrian boy holding anti-aircraft rounds up to the camera and smiling in the town of Marayan in northern Syria. Photograph by Syria Freedom, shared on flickr and used under (CC BY 2.0

Am I capable of killing?

If somebody had asked me this question five years ago, being a person who used to decorate her desk with Jesus’ advice to Peter—“Put your sword back into its place. For all who take the sword will perish by the sword”—I would probably have swiftly, and naively, answered: “Impossible! I neither have the ability nor the desire to end someone’s life.” Without much further thought I would probably have added: “—whoever this person is, and no matter what atrocities they have committed.”

We always like to think we are pretty; we aim not to smell like death; we believe we are messengers of life. We like to think that we are on this planet to make it a better place. That we are here for a higher purpose. That we are alive in order to chant others’ lives and be enriched by them, not to demean those lives and take them away. Five years ago I did not believe in abortion or the death penalty. I hated weapons and violence and I believed that change is made by love.

Today, I don’t know what I believe in anymore. It’s the war. Living perched on the verge between life and death all the time. You would either need a survival instinct always steering you toward the inevitable death of the enemy, or you’d surrender. One of you must die for the other to triumph. It’s the violence which redefined everything: our hopes, our beliefs, and our trust in the world. At a very early stage I had to rethink the answers to many violent questions: Am I a murderer? Am I capable of killing? Do I want to kill?

“Five years ago I did not believe in abortion or the death penalty. I hated weapons and violence and I believed that change is made by love. Today, I don’t know what I believe in anymore.”

The first shock came when they shot at us, a group of completely peaceful protesters. There they stood; they resembled us in everything but the dream. They spoke our language, some of them were even from the same city. I had to accept that the murderer is a person who’s like me. Maybe up until yesterday we went to the same places and danced to the same songs. Maybe this murderer was in love with the Aleppo Citadel, like I was. Maybe he had a girlfriend he’d met in a café or in university. How did he suddenly become, upon orders from the Sultan, a murderer? Where did this readiness to kill come from? How can a person, who doesn’t seem to have made any personal gains from the system, turn into such a killing machine? I wanted to think that I was better than that monster. That no one, and no ideology, would ever make me do something like this.

The question arose again when my mother was shot, and again when I was under investigation. Then I wished the investigator would die, especially after he threatened to hurt my family. I couldn’t really judge whether the world would be a better place if this person were gone. I wished for his death and I was ashamed of this wish. Does the new me believe that the death of certain people might actually be a benefit to the rest of humanity? And that not every single life is “sacred”? And that killing someone might save thousands of lives? Of course, I hoped over and over again for the death of Bashar Al Assad—I even dreamt it many times. Was I subconsciously playing God deciding who had the right to live and who didn’t? Definitely! I was surrounded by beautiful heroes who were falling dead because of the violence of people who I was supposed to believe had a right to live. The equation was very difficult. Oh, how much I’ve changed! And how much has maturity changed this naïve, romantic idea of changing the world with love.

All this was less pressing than living in the line of fire. From there we could see the army, only steps away from our houses. We chose those locations because they were less likely to be targeted by air strikes. This army that bombs us day and night. There was a check-point close by where we could see them drinking tea and hear them swearing at us through their walkie-talkies, in Aleppo we call them “fists”. The regular black humor in our house was about what we would do if the army broke in. As with every terrifying thing, we needed to face it with humor to silence the fear. One of our friends asked us not to wake him if the army broke in, and another said he’d jump off the balcony if it happened, while I joked that I would claim that I was kidnapped by my friends.

“The regular black humor in our house was about what we would do if the army broke in. As with every terrifying thing, we needed to face it with humor to silence the fear. One of our friends asked us not to wake him if the army broke in, and another said he’d jump off the balcony if it happened…”

A friend said he would use a weapon and fight them to death; another said he’d rather blow himself up than be captured alive. This is what the images of death under torture do to us. I said, whispering: I don’t think I am capable of committing the act of killing. There was silence, then they all laughed at my “articulate phrasing”. One of them said in a deep Aleppean accent: What, sister? I repeated the answer with the confidence of someone who believed in the morality of her decision: I will not kill!

And so began conversation that was to last for hours, until one of them asked me: What if the soldier was going to kill you? I answered: Then I would die. I’d rather be the victim than the murderer. He continued: What if the soldier was going to kill me? What if you could save me? What if this soldier heads to the neighbors’ house to kill Aiisha? Aiisha was the neighbors’ daughter who used to knock on our door every day to collect plastic bottles. She was too small to be seen through the door’s peephole.

I couldn’t know whether I was actually capable of stealing another life, and I was not sure that this inability is not, by itself, another form of killing. I have changed, I am disfigured now. This is probably a logical explanation, or maybe I simply matured.

The violence escalated. Scuds, barrel bombs, rockets, shells, friends dying under torture. And with every story I remembered—or don’t because my brain prevents me and suppresses these memories—the certainty that I was a person who neither kills nor wants to kill was gradually shrinking. ISIS was spreading in the liberated areas and started kidnapping journalists one by one. We ran then to our armed friends asking for protection, which was an important, fundamental contradiction: we wanted to hold on to our moral supremacy, which depended largely on others’ violence, not the nonviolence itself.

I still, to this day, don’t understand this war and its killing equations. This war, which I don’t know whether brings out the worst in you or changes you. The person who robbed his neighbor’s house after his neighbor fled: he doesn’t think he would have done that if it weren’t for the war. The person who wishes the death of everyone who doesn’t share his religious beliefs: he didn’t realise he had this much hatred inside.

My questions and uncertainties might not interest you. You might be completely confident, like I used to be, that you are incapable, or capable, of committing an act of killing. But my question remains: is every life “sacred”? Even the life of an ISIS militant who tortures others to death? Is passive surrender to your murderer another type of killing? Killing yourself? Ending your life or the lives of others whom you were supposed to protect? Did living constantly with death to the point of familiarity, and all the anxiety and uncertainty one experiences as a result, cause the answer to my initial question to become In fact, I don’t know?