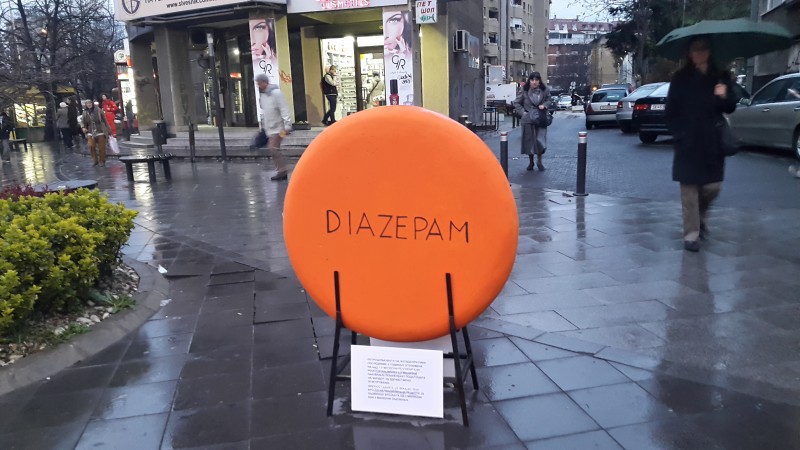 A monument to Diazepam in Skopje, Macedonia. Photo: F.Stojanovski. CC BY 3.0.

A unique sculpture appeared in Skopje, the capital of Macedonia, on March 9: a monument to the antidepressant Diazepam (also known as Valium).

The item in question is a giant orange pill 1.4 meters (4.6 feet) tall. It was installed near a main boulevard, along with the following explanation:

In case of urgent need, bite a part of the pill.
One bite equals 2 mg of the pill-sculpture.

With fewer than 2 million people living in Macedonia, the country's rising use of antidepressants has activists concerned that the trend indicates a growing “pill addiction,” which they say is also occurring in Bosnia and Herzegovina, Serbia, and Bulgaria. In 2014, the Health Insurance Fund of Macedonia warned that taking such medicines at certain levels can be toxic, especially during pregnancy. The fund's latest report, published in December 2015, shows that Diazepam was the country's second-most prescribed drug between January and June last year. 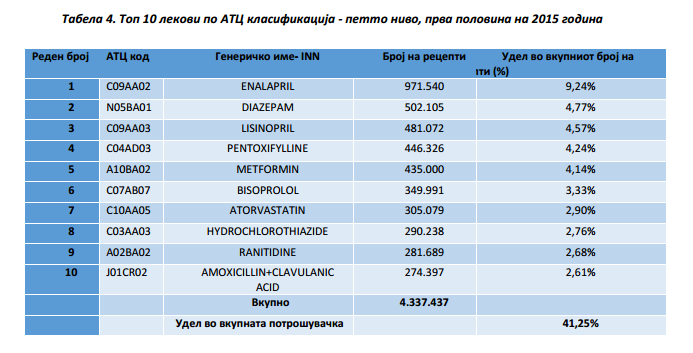 A list of the most-prescribed medicines in Macedonia between January and June 2015, published as part of Health Insurance Fund semi-annual report from December 2015. Diazepam is in second place, sandwiched between Enalapril and Lisinopril, which are used for treatment of cardiovascular problems.

“The monument” has incited political debate online. For example, one Twitter user joked that there would be violence in the streets, if people lost access to their antidepressants.

Cut the Diazepam supply for a month, and Molotov cocktails will start flying.

Zaneta Skerlev, another Twitter user, implied that people in Macedonia are turning to antidepressants to deal with stress induced by the government's bad decisions, linking to a news story about the pill sculpture:

I hope the government will take this personally. A “Monument to Diazapeam” appeared in Skopje.

While no one has claimed credit for the Diazepam installation, the likeliest candidate is a group of locally well known guerrilla protest artists.

In recent years, Skopje has been an epicenter of huge government spending through a project called “Skopje 2014,” which launched in 2010. The Balkan Investigative Reporters Network revealed that taxpayers in Macedonia (one of Europe's poorest countries) have been footing the bill for €634 million ($698 million) in spending on 136 different “objects” (27 administrative buildings, including a Triumphal Arch, 34 monuments, 5 squares, Ferris Wheel, and new facades).

Simultaneously, a “guerrilla” movement of mostly anonymous independent artists has used self-financed projects to offer commentary on current issues. The movement uses conceptual art pieces placed in public spaces as a form of protest. These artworks are short-lived, as the authorities often very quickly dismantle them.

For instance, through Skopje 2014, the government approved construction of four buildings in the shape of sailing ships located on the Vardar riverbed at the center of Skopje. The city has never offered an official reason for why it added them to zoning plans, or explained their connection to local tradition or history. The river has never been navigable, and the closest sea is over 240 kilometers (150 miles) away. Thanks to taxpayer-funded subsidies, entrepreneurs with ties to the government use these properties to operate luxury restaurants.

On a hot August day in 2015, citizens noticed shark fins circling around the “pirate galleons.”

The above YouTube video attracted almost 200,000 views in a single day. Today, it has more than 260,000 total hits. Responding to the footage, Skopje's city government quickly dispatched the fire brigade. The fire chief personally waded through the river to try to remove the sharks. Upon reaching the fish, however, he discovered that they were fake: the fins were styrofoam, attached to small rocks to stay in place in the water.

Similarly, activists have protested the city's loss of green space, as more and more trees are cut down to make room for new construction. Artists added “eyes” to some trees downtown, making them look afraid.