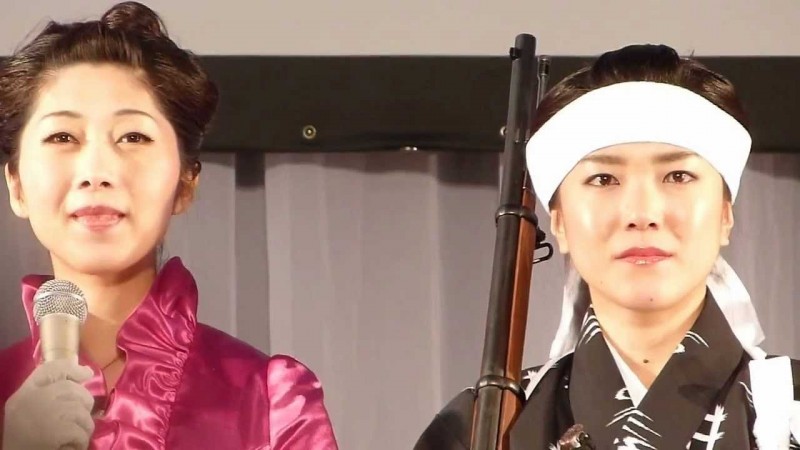 Actors from a historical revue in Japan. The actor on the right is portraying Niijima Yae. Screenshot from YouTube user Tsunoda Kazushi.

March 8 is International Women's Day, which in Japan is better known as Mimosa Day (ミモザの日, in reference to the mimosa flower, not the champagne cocktail).

The day is not an official holiday in Japan, but on social media there were messages of love, affection and appreciation for women.

In Italy it's a day when men give women mimosa flowers to express appreciation.

So, to all the busy women I'd like to say thank you very much :)

For some brands, March 8 provides yet another way to connect with their target audience. Fiat Japan, for example, tweeted:

Every year on March 8 the United Nations observes “International Women's Day.” In Italy this day is known as “Festa della donna” (Women's Day), and women are given yellow flowers (mimosa) as an expression of appreciation.

What do you think about surprising [the women in your life] with flowers today?

Other businesses use International Women's Day as an opportunity to take women's issues more seriously.

In anticipation of March 8, International Women's Day, we have on display a selection of books touching on women's rights and equality for women.

The Japanese government is promoting “a society in which women are dynamically engaged” (女性が輝く社会, sometimes translated as “Women will revitalize Japan”), if the government was aware of women's history why has there been no steps taken towards addressing the discrimination that exists against women?

Inequality and discrimination in Japan

Unfortunately, when comparing the status of women in other advanced economies, Japan does not rank well at all. The Tokyo office of the Organisation for Economic Co-operation and Development (OECD) tweeted:

In terms of the number of women elected to national office, Japan ranks near the bottom.

According to OECD data, Japan is last of all OECD member countries in terms of political representation for women. A higher-resolution version of the chart can be found here.

This year, International Women's Day comes less than a week after a Japanese government survey showed that 30% of working women report being sexually harassed in Japan.

However, there is a growing societal awareness of the problem of sexual harassment (セクハラ, sekuhara), even if major brands can sometimes remain clueless.

A recent advertising campaign for Pizza Hut featuring “idol” Nishino Nanase was called out for its ongoing theme of objectifying women:

Wouldn't this be sexual harassment?

Other challenges facing women in Japan includes growing income equality: one in six children in Japan live in poverty, and most of these children are living in single-parent households headed by women.

And for many women, the “Womenomics” of the current Abe government means simply being asked to do more work in exchange for less free time.

Credit where credit is due

Japan has a long tradition of female movers and shakers and “women warriors”, from ancient times to the present. While the country has much room for improvement in women's rights, there have been some bright spots in recent years in which female figures have received the popular respect they deserve.

And in 2013, women warriors played a leading role in a historial drama by Japanese public broadcaster NHK. The year-long series, Yae no Sakura (八重の桜), recounted the events of the mid-19th-century Boshin War and explored the lives of two women who fought in it, Niijima Yae and Nakano Takeko. Both were from Aizu, in modern-day Fukushima.

While Nakano, who died in war, is regarded as a modern-day folk hero, it wasn't until the 2013 drama that Niijima Yae entered the public consciousness.

If we're talking about women of Aizu it's always Nakano Takeko, but after watching the year-long drama everyone's talking about Niijima Yae.

[Note: The poster pictured in Aizu, Fukushima, shows Ayase Haruka, the actor who portrayed Niijima Yae in the series.]

The series debuted less than two years after the 2011 Tohoku disaster that devastated Fukushima and other parts of northeastern Japan.

For many, the grit, guts and determination of the women symbolized the spirit of Fukushima and the desire to rebuild following the earthquake, tsunami and nuclear accident.

Poster caption: Aizu [Fukushima] will never give up

Recently I watched Yae no Sakura.