‘Unmasking the Corrupt’? Transparency International’s Trinidad and Tobago Chapter Is Giving It a Shot 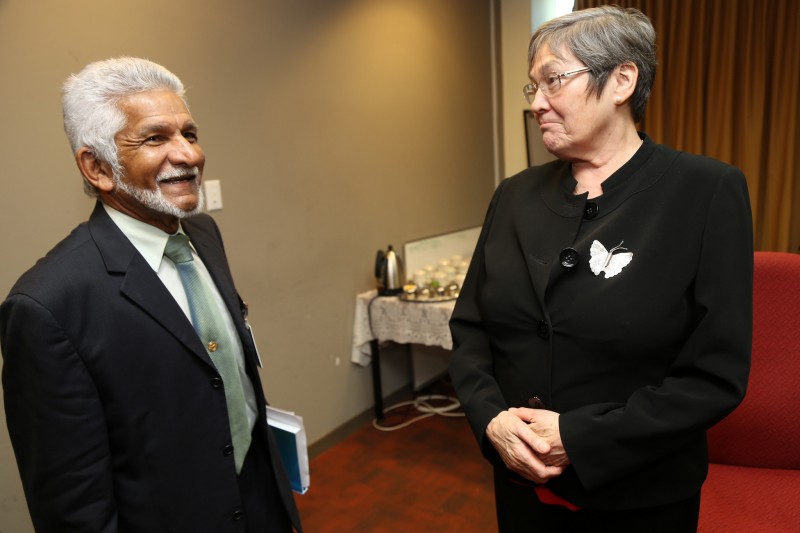 In Trinidad and Tobago, and the Caribbean as a whole, corruption is perceived to be enormously high. From public services like housing and utilities, to sports and the tendering process for state contracts, dirty dealing seems to be pervasive.

On Tuesday, March 8, the local chapter of Transparency International — the Trinidad and Tobago Transparency Institute (TTTI) — will host its annual anti-corruption conference in Trinidad's capital city, Port of Spain. Titled “Unmask the Corrupt”, the event boasts the presence of Transparency International's chairman, José Carlos Ugaz, who, prior to his appointment to the TI board, was a Peruvian juror instrumental in the investigation and conviction of the country's former president, Alberto Fujimori, on corruption charges.

Global Voices sat down with Deryck Murray, chairperson of TTTI, to talk about the results of the 2015 Corruption Perception Index (CPI), his organisation's work, and why continued efforts to fight corruption are critical to the region's future.

Global Voices (GV): The results of TI’s 2015 CPI are out. Can you explain how the surveys are actually done?

Deryck Murray (DM): There are 13 accredited surveys across the world, from bodies like the World Economic Forum and the World Bank. A country must have a minimum of three completed surveys — which include things like corruption barometers and economic markers — to be included in the CPI. For instance, Barbados had higher scores than Trinidad and Tobago in previous indexes, but because they did not complete last year's surveys, they do not appear in the 2015 index. [Of the regional territories surveyed in 2015, Jamaica topped the list with a score of 41 and a country ranking of 69. Guyana earned a score of 29 and a ranking of 119.]

GV: Tell us about the 2015 index and where Trinidad and Tobago — and the Caribbean as a whole — fell in the rankings this year.

DM: I'd like to deal with scores and not rankings. Let's start with the good performers. Denmark earned the top score of 91; Trinidad and Tobago scored 39 out of a possible 100. Scores reflect what people think of the countries in question, so in the case of Denmark, for instance, people who participated in the survey perceive that while there may be corruption, there are also tax laws and other types of rule enforcement in place and that if instances of corruption arise, there is a straightforward process to investigate, bring charges, reach conclusions and implement consequences.

I always like to make the education analogy. In school, if you got a mark of 39/100 where does that put you? You fail. When aspiring to your scores, you should be looking to be in the top percentile. As a student, you'd be frightened to show your parents a report card that had a grade of 39. When it comes to the 2015 Corruption Perception Index, that score of 39 has translated into Trinidad and Tobago being ranked #72 in the world. Some might say that's not so bad in a field of 167 countries — we beat 95 others. But the fact that we're ‘better’ than a few other countries is of little comfort to me.

Jamaica was level with us last year, this year they have improved. They brought in procurement legislation, they have a Contractor General who supervises all awards of contracts and who can prosecute allegations of corruption, bribes, etc. There are pending cases in Jamaica and people would look at that and conclude they are better than last year. For Trinidad and Tobago to be better, we have to do those things.

The problem is that we are not doing anything significant to warrant improvements in the scores. We have passed procurement legislation through the house [of parliament] but we have not yet put any mechanism in place to make that legislation respected. It calls for a Regulator and an Office of the Regulator, both of which are not yet in effect. That Regulator needs to establish a schedule of rules by which an assessment of tenders and award of contracts will take place. Until this exists, procurement legislation is just two words. We must implement the provisions in the legislation and make them functional.

GV: So what is TTTI doing to advocate in that regard?

DM: We are working with other civil society groups for them to advocate along the same lines in order to exert greater pressure to implement these measures as quickly as possible. When you look at procurement legislation, even if everything were in place, you still need whistleblower protection. People need to feel free to come forward and speak.

GV: What does TTTI do and why is important to countries – and a region – like ours?

DM: It's important because when you talk about corruption allegations, money laundering, white collar crime, it doesn’t always translate to people that someone is staling their money, stealing opportunities from their children and family, robbing them of services that they are entitled to have — proper education, water, electricity, health care — as citizens of this country. Our work must translate to let people understand what the fight is against; it affects their quality of life. When billions of dollars are stolen, people need to go right down the line and understand that it has cost them a hospital, a school, a recreation ground.

GV: Has this been successful or does the average citizen still not connect the dots?

DM: Success has to be measured incrementally, in the sense that the more people that get the message the more likely it is that our leaders will have to act to end impunity — and that will slowly start to unmask the corrupt.

It’s what I call an anti-corruption package. All our laws have to be synchronized — they are not stand-alone packages — they must work in tandem with one another. For example, when we talk about corruption we usually talk about it in the public service, by public officials, but for the cycle of corruption to work, the private sector would have to pay bribes to the public service. It's a supply and demand situation across the board.

In the conference, people are going to be talking about money laundering and cybercrime…about the way things are done and who you need to have on your payroll to facilitate these illicit transactions. When we highlight these issues, it’s to educate our people about what they really face in terms of being denied development opportunities and merit awards — because even if money isn’t changing hands, there are still issues of nepotism and cronyism that need to be confronted.

GV: What are some of the specific measures we can take?

DM: Implementing and enforcing laws, looking at campaign financing, instituting anti-corruption measures. Many of our institutions are outmoded and our legal system is in backlog. Offenders know this and take the chance because they know there is such a small likelihood that they will never be prosecuted — or even investigated because of the backlog. The judicial system needs to move more quickly. From the judges and magistrates to the lawyers and witnesses, the chain must not be broken.

GV: Has your organisation been using social media to help its cause?

DM: Not sufficiently. We need to be able to do that a lot more. TTTI has stayed close to traditional media — we're interviewed and consulted quite a bit — but social media can allow the issue of transparency to be more embracing of youth, and let them take the lead. The youth arm of TTTI ran an anti-corruption programme in December 2015 and it was brilliant! They incorporated spoken word, poems and skits and brought the message across in a number of different ways so that it really resonated.

GV: Jose Carlos Ugaz, Chairman of Transparency International, will be speaking at the TTTI’s 5th annual anti-corruption conference. What is the significance of his presence?

DM: The top man from TI and the Prime Minister of Trinidad and Tobago will be on the same platform during this conference. What it says is that the CPI 2015 results pose a specific challenge to our country's new government, because it is a benchmark by which to judge themselves and to be judged against going forward. The international focus is on this country because of the presence of José Ugaz. For serious-minded citizens, civil society organisations, ministries, business executives and other people who can have an impact on how business is done, this conference is a must.

The new chair was elected about a year ago. He was a prosecutor in Peru responsible for a significant number of prosecutions, including then-President Fujimori, and he won more than 200 cases against 1,500 members of the Fujimori network. He just went in and started prosecuting everyone associated and it was a major breakthrough. The question we need to ask ourselves is, ‘Why wouldn’t that happen in Trinidad and Tobago?’

DM: That cannot be a reason for everyone to kowtow. You need people to stand up and be counted. The alternative is that your children have to grow up in a corrupt society — buy exam papers, driver’s licenses, jobs. Let's unmask the corrupt. That cannot happen if all the good people run and hide.

GV: Are money laundering and cybercrime huge issues across the region?

DM: The world is so small that you could be sitting in an office somewhere and robbing someone else's bank account across the world. The conference talks about the issues; we need to galvanise the people in regional societies. One approach is the way of the Arab Spring, or you could do it through accepted channels and processes — parliament, advocacy, applying pressure through reasoned arguments to effect change — which is our preferred path.

GV: How do you see the future of the Caribbean when it comes to transparency and good governance?

DM: We have to continue working on it across the region. We have, in the past, engaged other territories to get them to start individual [TI] chapters, but we are also happy to explore the possibility of multi-territorial chapters, since in smaller islands there may be greater pressures on individuals not to speak out. We need to be able to support and encourage formation of chapters. TTTI collaborated with Jamaica, which finally got chapter status at end of 2015, so there are two regional TI chapters now. We are currently working with Guyana to get theirs established.

Combating corruption will be a continual battle; I continue to be optimistic in fighting for improvement and we will succeed. The thing is to be firm in your commitment. I know what my principles are and I'm not going to waver from that. You have to work with other people; it will be slow and gradual, but we have to keep chipping away.

I am perfectly aware that we need 40-somethings down in the trenches doing the hard work, but because most people in my age group are committed, we need to be examples. That is what I’d like to stand for and be known for. And the 40-somethings need to convince the 18-year-olds, who in turn need to convince the kids. It starts from young — we need them to know that integrity succeeds.