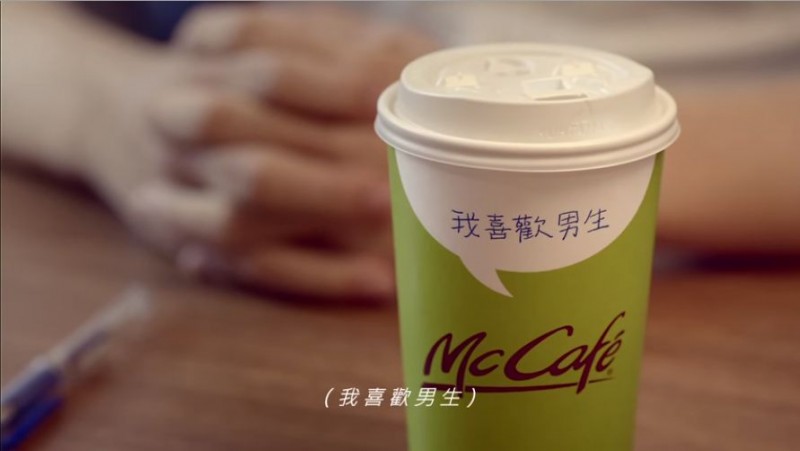 This post was written by Karen Cheung and originally published on Hong Kong Free Press on March 7, 2016. The edited version below is republished on Global Voices as part of a partnership agreement.

A Taiwan McDonald’s commercial featuring a young man coming out of the closet to his father in the fast food chain has gone viral and been warmly received by netizens’ overall. However, it has been criticised by religious groups such as Taiwan Family, which issued a statement condemning McDonald’s for spreading “improper” ideas to children.

Lesbian, gay, bisexual, and transgender (LGBT) rights in Taiwan have been regarded as some of the most progressive in East Asia. Last year, its pride parade was the largest in Asia with more than 78,000 protesters in streets. Moreover, newly elected President Tsai Yingwen has shown her support for LGBT rights and endorsed same-sex marriage.

Taiwan's liberal social environment has given space to creative commercials that address the generational conflicts on the controversial subject of sexual orientation.

The video opens with a young man and his father sitting in silence at McDonald’s McCafe. The camera then pans up to a message the young man has written on a cup facing his father, which says “I like boys.” The older man stands up and leaves, but returns soon after to write on the cup as well and modify the message to become “I accept that you like boys.” The young man then tears up and the two smile at each other.

The video was uploaded on March 4 and has received more than 770,000 views on YouTube. It also has been shared more than 9,000 times on Facebook, with most of the feedback being positive; according to Facebook reactions, 10,000 liked the post, 4,100 ‘loved’ it, with 83 ‘angry’ and 1,800 ‘saddened’ by it. One person commented on YouTube: “The last couple of seconds made me cry”, and another said, “Support gay marriage!”

Brenda Kou, head of marketing at McDonald’s Corporation, told independent news site Apple Daily that the commercial’s intention was to show the spirit of communication and dialogue, which are the basis of reaching any consensus. She also said that they wanted to denote that different voices can be accepted in society.

Murphy Chou, chief creative officer at Leo Burnett Taiwan – which produced the commercial – said that it was not a stance on LGBT issues; rather, it was a depiction of the struggles that come with being a parent who wants to support their children. He added that McDonald’s in France aired an LGBT-themed commercial around 2010.

Anti-LGBT group Taiwan Family issued a statement the following evening, saying that they were opposed to any public promotion of ideas that would encourage LGBT behaviour. The group also said that McDonald’s was a place frequented by many children and called for parents to boycott McDonald's, saying,”I feel corrupted even using their washroom,” news site Ming Pao reported.

Many netizens anticipated such conservative reactions, and on gossip forum, Disp BBS, one user gathered a list of corporations that are pro-LGBT rights including Google, Facebook, Apple and Starbucks. The user then challenged the religious coalitions to boycott them all.

Taiwan Family called for a boycott of McDonald's. Netizens predicted that yesterday. See Disp BBS https://t.co/BHS0HlE7QX // What's wrong with this group of people? There are so many broken families in Taiwan, what have they done to protect them? Aside from being anti-LGBT rights, what have they done? These anti-LGBT groups said they were protecting family, isn't such a claim hypocritical in Jesus's view?