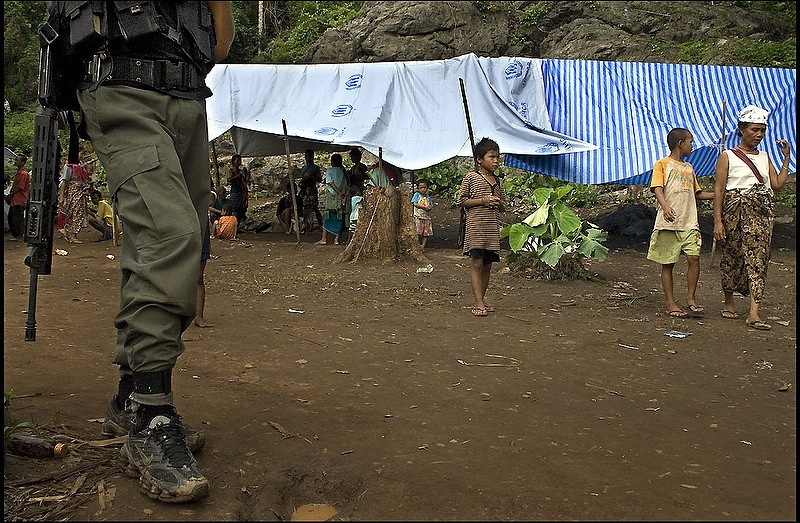 A Thai soldier stands guard at a camp for Karen refugees on the Thai-Myanmar border. Photo: Rusty Stewart / Flickr. CC 2.0.

The United Nations High Commissioner for Refugees (UNHCR) has produced a video encouraging Thais to help Myanmar refugees living along the Thailand-Myanmar border.

Titled “The Life of Pa Thu,” the video highlights the situation of child refugees and is part of the “Namjai for Refugees” campaign, which aims to provide assistance to 106,000 Myanmar refugees living in nine camps inside Thailand. The word “namjai” means “generosity” in the Thai language. The campaign seeks to extend the culture of giving to refugees living in the northern part of the country.

The video features a Thai actress telling a story about a child refugee to an audience of young students. In the video, Pa Thu is a child who lived on a farm with his parents, until “bad guys” abducted his father, forcing him and his mother to flee into the jungle. Eventually, they reache a refugee camp. The video also shows Pa Thu wishing to return home and see his father again. The video ends by encouraging Thais to help the refugees by supporting the work of UNHCR:

For the past 60 years, the region has been awash in refugees because of a war between various ethnic groups and Myanmar’s national government. The refugees in Thailand are mostly Karen and Karenni ethnic peoples who were displaced from their homes when the war spread to their provinces, now more than 30 years ago.

The UNHCR is calling for donations to help Thailand's asylum seekers:

They had no choice but to seek asylum and safety in Thailand. Most are children, women and the elderly. All are struggling to rebuild their lives while coping with the trauma of the past and the hardship of the present.

We can’t change their past experience but, together with your Namjai, we can help them to create a better future.

In particular, the United Nations shared the harrowing story of Nor Mu, a child refugee:

My village was full of armed people. If they found anyone, they would slit their throat or shoot with gun. We also were forced to be their laborers. Women were not an exception. My family was shot dead. I was left with my grandmother.

Many in the region hope peace negotiations can be rekindled between various ethnic groups and Myanmar's new ruling party, headed by Nobel Laureate Aung San Suu Kyi. If the two sides can reach a settlement, it would bring an end to one of the world's longest ongoing civil wars.