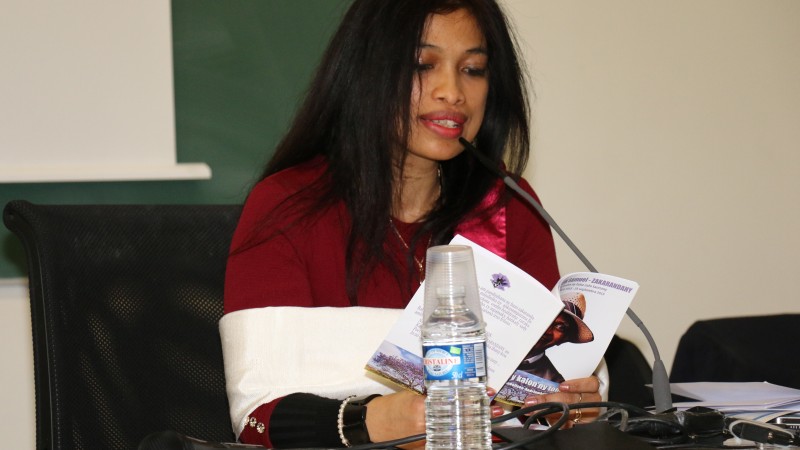 Hanitr'Ony at a conference on the Malagasy language. Reproduced with permission.

Learn the Malagasy language's rich history, and you'll have a pretty good grasp of Madagascar's own past and diversity. Most of the language's traditional vocabulary has Australasian origins, but Malagasy is also part of a language group composed of more than 20 local variants. Though it's spoken by some 22 million people, Malagasy is nevertheless threatened today by standardisation in the means of communication, which is promoting a convergence towards a single language.

Hanitra Salomon, known by the pen name “Hanitr’Ony”, comes from a literary family. She belongs to the latest generation of contemporary Malagasy poets and is a long-time defender of the Malagasy language. She recently spoke to Global Voices about the vital importance of protecting local languages from globalisation.

Global Voices (GV): Tell us a bit about your career. Where did this vocation come from?

Hanitra Salomon (HS): I was born into a family of artists. My parents are the poets, musicians, and singer-songwriters Dédé and Raivo Patricia of the Malagasy folk group Sorajavona. My mother is also a designer, so she is interested in beautiful things and literary texts. As a child I spent my time reading. I started to write for fun at the age of nine, and I soon discovered that it was important to me. My schooling was quite ordinary; I took the science stream for my baccalaureate at Saint-Michel Amparibe School in Antananarivo, and I studied sciences at the Ecole Supérieure Polytechnique also in Antananarivo (ESPA). I noticed that literature has its rightful place in the scientific world. I continued to develop my passion for literature, and in 1994-5 I took the RANTO course in writing at the Malagasy Academy, this course was run by several teachers active in research, including M. Siméon Rajaona. I took part in poetry readings and put on shows myself. Then I published in the daily papers in Madagascar, and finally I joined the literary circle of Faribolana Sandratra in 1993, and the Malagasy Union of Poets and Writers (HAVATSA-UPEM), four years later. My grandfather, Dox Razakandraina, was one of the 15 founder members of this association in 1952. In 2004, with nine other poets I founded the French branch of HAVATSA-UPEM. In 2010 I was one of the 11 founders of the French branch of the Malagasy Speakers’ Association, FIMPIMA France, under the auspices of Mme Hajaina Andrianasolo, who was then the Director of Training for the association of orators who practice Kabary, which is the art of Malagasy public speaking. Here is a video of our activities:

GV: What role does a writer play in society?

HS: In my opinion, the role given to authors, creative artists and researchers, and even to culture in general, represents the strength of the nation. Authors observe society, and the study of literary and artistic works can provoke significant events in a country. When you read Rado’s poems, such as ‘Zo’ (1972) which calls for citizens’ rights, or Ny Avana Ramanantoanina’s poems, like ‘Sambo’ (1915) written when in exile on the island of Mayotte following the events of the independence movement VVS (Vy, Vato, Sakelika) you see the link with the history of Madagascar. But authors can use their art to calm tensions and celebrate life, as Dox does in Ny Hirako (1941), Folihala (1968) or Dindona Fitia (1973). Besides drawing out the beauty of human society, as well as its ugliness, he questions what appear to be established truths and inspires people to think about increasing justice and equality in society. The writer must also take into account the many changes our world is going through. The author acts as a receiver for the waves emitted by the world and relays them to us through his or her writing.

A radio broadcast of an extract of one of Hanitr’Ony’s works:

GV: In theory, there are 22 million people (excluding the diaspora) who speak Malagasy, but it seems to me that you’re a little bit worried about the future of our language. Why?

HS: In theory, yes, 22 million people speak Malagasy, but many of them, especially in the big cities of Madagascar, speak a diluted form of the language, a different sort of Malagasy. The influx of foreign schools and education has strongly influenced how our language is, or isn’t, used. [Editor’s note: higher education in Madagascar is mostly in French.] It is no longer surprising to see young people in Madagascar who do not know how to speak their language in their country!

It is also the case that Malagasy children born overseas do not use their language because there are no Malagasy language schools where they can follow a specific curriculum from a very early age. Even if voluntary organisations give their time and energy to offer private lessons, it will be insufficient. Parents who therefore find that they are the only people who can pass on the language, can feel powerless due to a lack of time or means. In France, more than 90 percent of children with at least one Malagasy parent do not speak Malagasy on a daily basis.

These two facts worry me, but we must not forget that more than 70% of the population of Madagascar live in a rural environment where it is the official language. If we can maintain that, the language will not disappear. However, that is not sufficient. All Malagasy citizens must be educated to know and speak their language, and to do so as well as possible.

GV: You are extremely active in the promotion of Malagasy culture. Tell us about your recent projects and upcoming plans.

HS: Well, I wear several hats and have various activities happening at the same time, simply because I get lots of requests from all sorts of people who are interested in Malagasy culture. The French branch of HAVATSA-UPEM, which I chair at the moment, recently celebrated its 10th anniversary when we put on an exhibition and some lectures and shows.

HS: On 13 February, we organised a one-day Malagasy literary festival in conjunction with the Centre for Research into the Western Indian Ocean and the Austronesian World at the National Institute of Oriental Languages and Cultures (INALCO CROIMA) to commemorate the centenary of the birth of the poet Zakarandahy (1915–1994), which included a presentation on the place of love in Malagasy culture and literature entitled ‘Pages of Love’ or Takela-pitia.

HS: I am also continuing to present my bilingual children’s programme “Bitsiky ny Ankizy” (Children’s Whispers) on the internet radio station Radio Bitsika. It aims to awaken the curiosity of any child to the Malagasy language and tell them about our culture. Our young guests come from all nationalities and are happy to find out about Madagascar through the programme. I will also continue to give lessons in Malagasy to children and adults at all levels.

In the near future I would like our work to be supported by government bodies so that it can reach more people. By promoting the culture, people will get a different view of Madagascar. Those who came to Dox’s centenary event went away enriched by the exhibition and musical performances, saying “We didn’t know this side of Madagascar”.

In addition to its natural resources, Madagascar’s the greatest treasures are its culture and people. I would like this culture to have the place it deserves, so if anyone would like to help make this a reality, please write to me at hanitrony@gmail.com.

As for personal projects, following my collections Bitsik’Ony and Tsirin-kalokalo and my first single as a songwriter, Tiako, I am editing bilingual literary work. 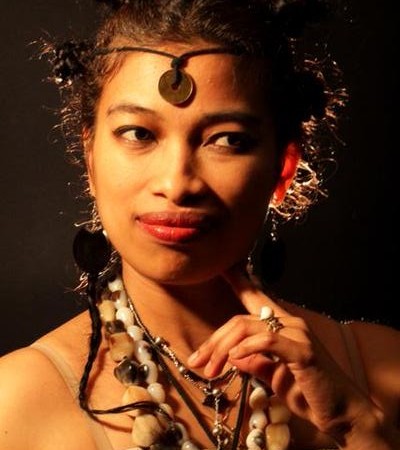 GV: Generally speaking, do you think Madagascar's leaders and citizens are sufficiently invested in Malagasy culture?

HS: Lots of cultural associations, clubs and institutions work to promote Malagasy culture and provide artists with the means to express themselves. Cultural events are very popular in Madagascar. The Malagasy have a great artistic sensibility and most people sing, play an instrument, write or do something else artistic, but the consumption and production of local literature remains low due to a lack of funds. It’s sad because most artists cannot earn enough to make a living from their talents. Music, painting, photography, cinema, sculpture, poetry, theatre, dance, books and so on are still neglected too much. However, we must recognise that a lot of effort has been put into improving living standards for artists, thanks to constant campaigning activists. But this is still not enough.

I think there is work to be done to ‘educate’ people’s curiosity and get them into the habit of being open to discovering unfamiliar artists and different styles. As far as the language is concerned, influential people in positions of power should set an example by making the effort to speak well. Make time to take lessons. Why not? Malagasy is predominantly a spoken language and the culture encourages good orators. (Mahay mandaha-teny e! Mpikabary ikoizana e!) People have a tendency to copy their representatives, so if the leaders speak their own language badly, the people will do the same.

GV: Is globalisation a threat, or is it an opportunity tell people about our culture?

HS: Globalisation has been making its mark for several decades. Major languages can be a means of communication, discussion and dissemination; they can be used to publicise novels and works by great authors from all over the world through translations, or through cultural summits where each country can present its own culture. But globalisation can also stifle, or even crush, a culture as resources are used to impose one language when dominant languages become standardized. Language has been a tool of conquest in the French colonies when speaking the local language was forbidden and resulted in punishment or fines. Things were more flexible in British colonies, but the French are now more supportive of work to protect languages in the process of extinction. On International Mother Language Day (21 February) we were reminded that of the 5,000–7,000 languages spoken in the world, 25 die each year (cf Nicholas Evans), and 2546 are in danger of death (UNESCO statement 21 February 2016 on International Mother Language Day)

HS: First of all, I’d like to say that, despite the dreadful news we see every day, the bees continue to make honey, flowers grow each spring, we continue to do good deeds, and we work hard in the hope of seeing our dreams come true. My very last message is borrowed from the poet Di (Henri Rahaingoson) “Andrianiko ny teniko, ny an’ny hafa koa feheziko”, I will make my language sovereign; as for the languages of others, I will master them and make them mine as well. This adage expresses the state of mind that should be promoted in our modern world. We still have a lot to learn and discover. Let us not close ourselves off to travel, to the other, to the unknown, because that is what enriches us, but we should also value what makes us different, our own culture.