India's Promise To Double Farmers’ Paltry Income May Be Too Little, Too Late 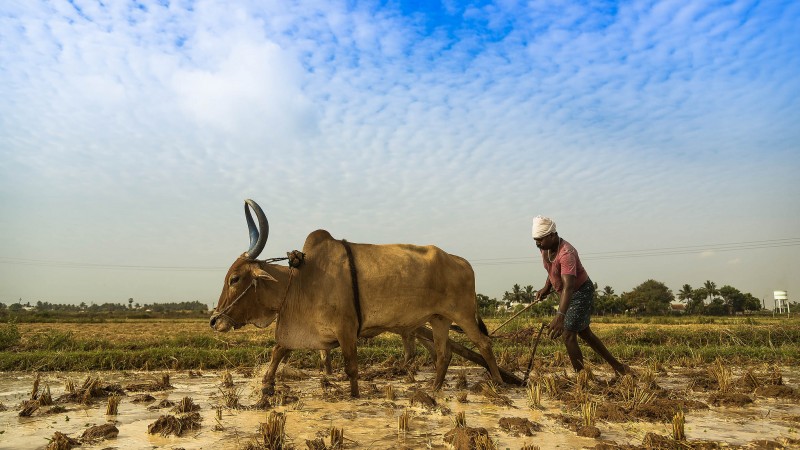 India is an agrarian economy where more than 50% of its population is directly or indirectly associated with farming. While India is one of the major — and fastest-growing — economies in the world, the agricultural sector, which employs around 120 million farmers (25% of the work force) contributes to only 18.1% of the country's Gross Domestic Product (GDP). Over the years, as other industries like manufacturing and BPO surged, India's farm productivity has declined. The country's farmers are getting poorer, leading to growing inequalities.

A way forward for agriculture?

Last week, Prime Minister Narendra Modi announced a “roadmap” for boosting the agriculture sector, with a promise to double the income of farmers by 2022. The country's 2016 budget reflects this plan and has drawn both accolades and criticism — but analysts say that the measures it contains may not be enough to reach the government's ambitious target.

An Indian farmer's average income works out to less than US $2 per day. In 2014, the National Sample Survey Organisation (NSSO) computed the income of an average farm household to be about Indian Rupees (INR) 6,000 (US $90) per month, of which only Rs 3,000 (US $45) came from farming. The rest came from non-farm activities, including the “Mahatma Gandhi National Rural Employment Guarantee Act” (MGNREGA) — a social security measure introduced in 2006 — which provides at least 100 days of wage employment in a financial year to every household whose adult members can do unskilled manual labour for the government. Under this scheme, the average wage per day varies according to states, ranging from a minimum of INR 122 (US $2.5) in Bihar, Jharkhand, to INR 191 (US $4) in Haryana. But the money is still not enough.

The reasons are many. The cost of inputs, including water, seeds and pesticides, are high and ever-increasing. At least 30 percent of the total output is too much for a low-income agricultural household to handle. The majority of these families live in deficit households, where expenditure exceeds income; most farmers have to take loans just to meet their day-to-day consumption requirements. As a result, over half of all agricultural households are indebted; the average loan amount outstanding for a farming household in India is Rs 47,000 (US $700). Marginal farmers are therefore trapped in a cycle of debt and low nutrition, as they need the loan to survive through lean periods when there is no income.

The ripple effects of the situation have been severe. In 2014, over 12,300 Indian farmers committed suicide due to drought and crop failures and there are reports of farmers selling their blood to make a living in the drought-hit Bundelkhand region.

Indian journalist, writer and thinker Devinder Sharma explained in his blog “Ground Reality” why farmers are becoming poorer and trying to get out of the sector entirely:

With agriculture turning into a highly losing proposition, more than 40 per cent of the farming population has expressed the desire to quit and migrate to the urban centres.

Compare that with the monthly salary of a peon in government service, the average monthly packet is at least five times more than what a farmer gets. While government employees look forward to a fixed monthly income packet every month and gets the benefit of an annual increment as an adjustment for general price rise, the farmer is left high and dry and at the mercy of the moneylender or the banker.

The choice of crops is also an issue. In India, rice and wheat comprise 70 percent of agricultural produce by area, but fetch less than 25 percent of the agricultural sector income.

In an article at Rural India Online, Aparna Karthikeyan wrote about how farmers are trying to deal with the decreasing income in the agricultural sector. Apart from working in the fields, they have taken one or two full-time jobs to sustain their families. But not all of them are lucky — lack of education or non-flexible job hours can often be hindrances.

Farmers like Pawanjot Singh advised struggling farmers to quit if they cannot overcome the challenges involved in being agriculturalists. Rohit Parakh at The Logical Indian questioned why there is no minimum wage for farmers.

In a recent budget speech, India's Finance Minister Arun Jaitley promised to double the income of the struggling farmers, by spending Rs 359 billion (US $7.3 billion) on boosting the vast agriculture sector. There are a lot of variables in the roadmap to achieve this, but many fear that the plan contains no relief measures for the farmers. The only thing that the finance minister promised was to double farmers’ income by 2022, but in five years, inflation alone may counteract any gains.

The average income a farmer gets from farming activities, including what he keeps for his family consumption at home, [..] in 17 States is a paltry Rs 1,666 (USD$25) per month. [..]

Five years, the Finance Minister wants the farmers to wait. After five years, and even if the promise is realised, the income of farmers in these 17 States will go up to Rs 3,332 (USD$50) a month. I can imagine the Economic Survey, to be presented in 2022, proudly stating that because of the continuous efforts, the government has succeeded in doubling farmers income. Certainly, what an ‘achievement’ economists would say. But by that time, adjusting for inflation, even the Rs 3,332 (USD$50) would be equivalent to Rs 1,666 (USD$25) that a farmer is able to make now.

PM announced his intension to double farmer's income by 2022 but gave no assurances about curbing inflation. Effectively no gains.

Former Indian prime minister and noted economist Manmohan Singh said that the government’s announcement that farmers’ income would be doubled in the next five years is an “impossible idea”, because there is no clear path defined on how to achieve this:

To double #farmer's income in 5 years, Cultivation of unique crops exclusively available in India is a must #Budget2016 @RadhamohanBJP

According to D. Jayaraj, a professor at the Madras Institute of Development Studies in Chennai, there are two effective ways to increase farmers income: increase guaranteed crop prices or raise subsidies on inputs such as fertilizers, pesticides and seeds. As per a planning commission recommendation, an increase in agricultural productivity is the key to improving farmers’ standard of living — and the strategy of agricultural development should particularly focus on small, marginal and other disadvantaged farmers.

It remains to be seen whether the announcement to double the income of the farmers remains a campaign slogan or if positive changes are really in train.