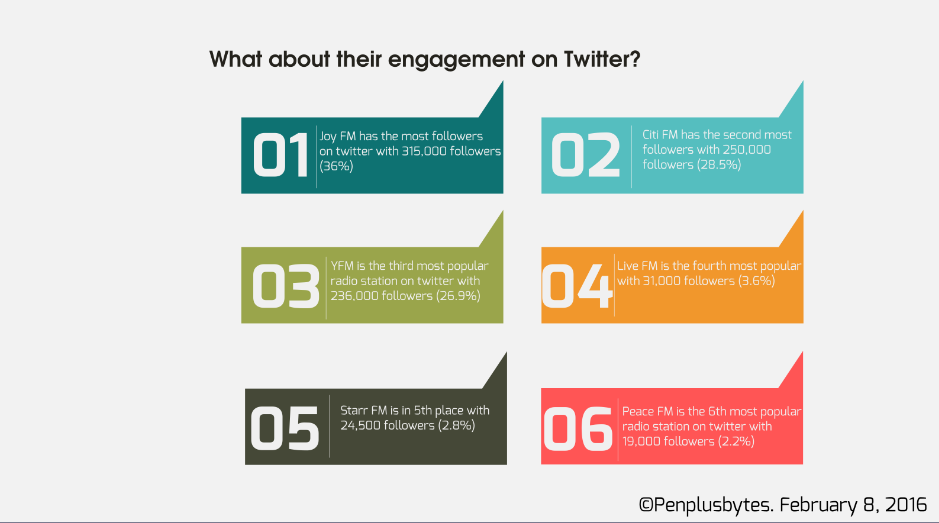 According to a press release [3] issued by Penplusbytes, the index examined the media houses’ activity on social media up until February 8, 2016, and how effectively they use social media platforms, especially Twitter and Facebook, to interact with their target audience.The report looked at 37 newspapers found to be in active operation and/or most visible in newsstands. It also looked at 16 out of the 22 TV stations and 309 out of the 390 radio stations currently operating on air.

The report shows low usage of social media by print media. Many of the newspapers in Ghana do not have a strong social media presence as compared to radio and TV stations. According to the report, 20 out of 37 newspaper have active Facebook pages, and only 6 have active Twitter handles.

The radio stations in Ghana, according to the report, use social media more actively to engage their audience than newspapers. Citi FM [4], one of Ghana's most influential media houses, was identified as the leader in social media presence in Ghana. Citi FM has over 600,000 likes on Facebook [5] and a verified Twitter account [6](the first media house in Ghana that got a verified account by Twitter) with over 265,000 followers. 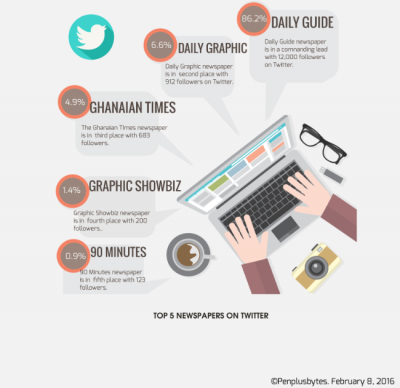 According to the report, Daily Graphic [13], the most read newspaper in Ghana, had the highest number of likes on Facebook with over 621,000 likes [14]. Daily Guide, a privately owned newspaper, took the lead with respect to number of Twitter followers – over 12,000 [15].