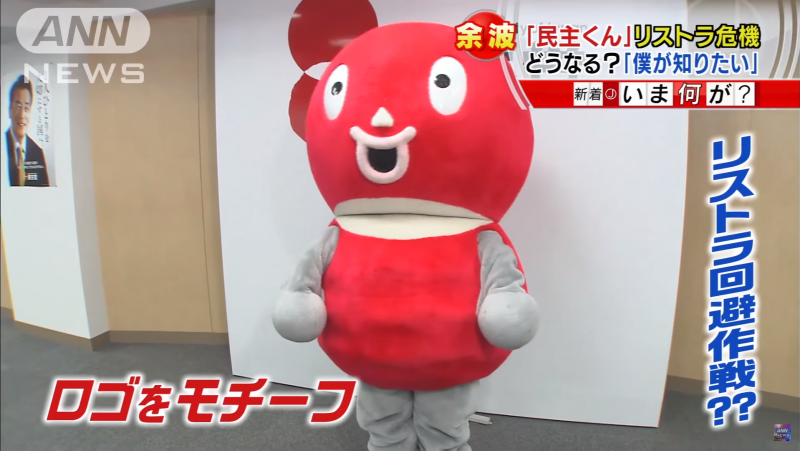 Captions, left to right: Logo change (for new party)? Merger aftermath: Minshu-kun in danger of layoff. What fate awaits him? “I just want to know!” How will he avoid being restructured?? Screencap from ANN official YouTube channel. [1]

The proposal to merge two opposition parties in Japan could spell the end of Minshu-kun, the quirky mascot of the “Minshuto” (民主と), or the Democratic Party of Japan [2] (DPJ), which serves as Japan's largest opposition party in the Diet.

Despite being the public face of Japan's largest opposition party, Minshu-kun has tended to adopt a quirky and quite unique online persona:

Just getting a ride in a cab!

Minshu-kun was originally created to connect with youth following the decision in 2009 to lower Japan's voting age to 18 [5].

The lowered voting age will go into effect in upcoming 2016 summer elections, and Minshu-kun spends much of his time visiting schools, encouraging youth to vote.

Check back here for more details!

While the DPJ remains unpopular with just about every demographic in Japan, to a certain extent Minshu-kun has managed to appeal to a younger demographic.

I dislike the DPJ but I wouldn't necessarily say I particularly dislike Minshu-kun.

The mascot gets his globular shape from the Democratic Party's logo, a rising sun accompanied by its reflection in the sea.

That sun, in fact, may be setting on the Democratic Party and Minshu-kun.

This summer Japan will hold elections [10] for both the upper and lower houses of its bicameral national Diet.

The DPJ formed Japan's previous government before being toppled from power by Abe Shinzo and the Liberal Democratic Party in 2012.

In opposition, the party has experienced infighting and lacklustre public support, and faces potential oblivion in the summer 2016 elections [11].

The DPJ is planning to merge with Isshin no To [12] (維新の党 [13], the Japan Innovation Party), the second-largest opposition party [14] in Japan's Diet by number of seats. The two parties will formally discuss the merger on March 27 [15].

While there has been talk of the DPJ simply absorbing the much smaller Isshin no To, it's likely an entirely new party, with new branding will emerge before the summer elections.

If this happens, there are fears Minshu-kun, with his bold DPJ branding, will be “restructured” (リソトラ) or laid off, even after escaping the great Japanese mascot cull of 2014 [16].

…Minshu-kun is getting laid off?

Minshu-kun replied, displaying some of his odd sense of humor:

Me, laid off? I don't have any idea of what's going on either!

By the way, I'm on my way to the hospital to get some medicine for this gout I have. It's no coincidence, it feels like fate (you and I will be at the hospital at the same time).

Some DPJ members appeared to be on the defensive about the decision to retire the mascot. Kuroiwa Takahiro tweeted:

Today at party HQ we held a presser with the weekly tabloids and a number of media outlets. Although the theme of the discussion was supposed to be about the merger between the DPJ and Isshin no To, conversation quickly turned to whether or not Minshu-kun the mascot will get laid off.

I would say that I did recommend (in 2009) that Minshu-kun become the (public face) of the youth wing of the DPJ.

However, it seems Minshu-kun's days are indeed numbered.

In a recent interview [28], Okada Katsuya [29], current leader of the DPJ, said that Minshu-kun may be headed for the unemployment office.

It's a no-brainer [28] the party logo is going to change. While we could somehow “shape up” Minshu-kun so it's reflects the new branding, I get the feeling it's going to be pretty hard to do.

While he might live on as an unauthorized mascot, I think a better idea is to take him down to Hello Work [30] [the Japanese government's network of employment centers], get him some retraining and introduce him to a new workplace.