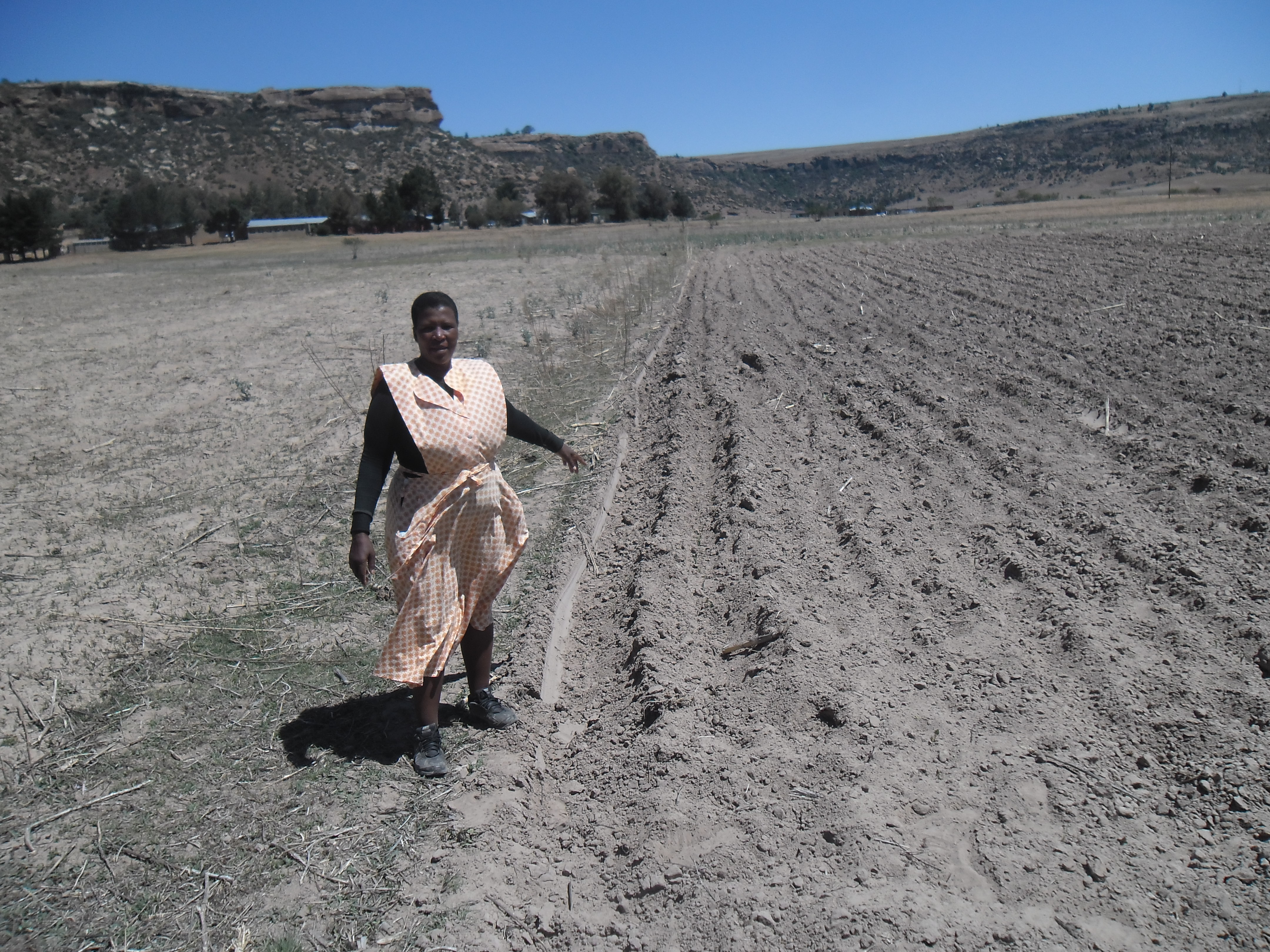 A farmer showing a drought affected field in Lesotho. Photo used with permission from Send a Cow.

Lesotho, a landlocked kingdom completely surrounded by South Africa, declared a state of emergency last month. According local UN officials, as many as one in three Basotho may require food aid until next year.

World Food Programme's country director Mary Njoroge says the drought has forced people to adopt negative coping mechanisms, which include selling assets and even theft. The country experienced a downpour recently, leading to what experts call ‘green drought’. The rain deceptively greened Lesotho's valley where fields have no crops or vegetables.

The drought is caused by the El Niño weather pattern, which has left more than 100 million people in southern Africa, Asia and Latin America without food.

There were some challenges as Manthethe experienced an electricity shortage and was forced to change location shortly before the chat took place and a slow Internet connection in Lesotho meant responses were delayed.

The importance of vegetable growth was a key issue in the conversation. Unlike maize, which usually takes five months from planting to harvest, vegetables grow very quickly.

Lumela ‘M'e Manthethe! If we help you to provide vegetable seeds for families now, when will they be ready to eat? #asklesotho

Is an organisation that uses livestock to support communities the best placed to help when there are food and water shortages? #askLesotho

Joey Brownbill wanted to know if Send a Cow operates like the World Food Programme:

@joeybrownbill @WFP #askLesotho We do not provide food aid, we provide training and agricultural inputs

He then wanted to know if that solution is practical:

@SendaCowLesotho @WFP but how will that help people now? #askLesotho

@SendaCow #askLesotho The response is age and gender inclusive, targeting the most vulnerable, ie,elderly,OVCs,people with disabilities, etc

Another user questioned the severity of the crisis, asking whether it was a ‘‘once-in-a-lifetime’’ or ‘‘once in a few years’’ crisis:

@MrsMoulogo @SendaCow #askLesotho I'd be interested to know how bad is the emergency in context-once in a lifetime, or once every few years?

@Waterloo_TWF @SendaCowLesotho 1) The problem is getting worse, so we must tackle it with long-term solution, not just food aid. Families

A Twitter user based in Wales, Cathy Moulogo, wanted to know the benefits of recent downpour:

Hi @SendaCow are the current rains making any improvement to the drought situation? #asklesotho

She then wanted to know what can be done to alleviate hunger:

@SendaCowLesotho @SendaCow that's great news! Will there still be widespread hunger? What can we do about it? #asklesotho