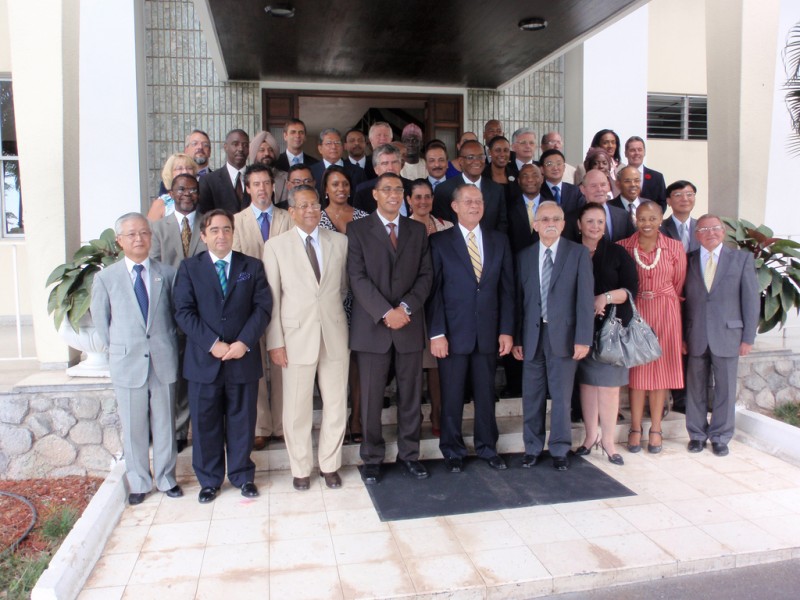 United Nations and UNDP representatives meet with the Jamaican Government and Diplomatic Corps at the Office of the Prime Minister, Jamaica House, Kingston, in 2011 — Andrew Holness (in dark suit and red tie, middle, front row) was, at the time, Prime Minister Designate. Photo by UNDP Jamaica, used under a CC BY-NC-ND 2.0 license.

After an intensely fought campaign, the Jamaica Labour Party (JLP) regained power in the Caribbean island nation in its 2016 general elections on February 25, wiping away a deficit of 21 seats in the 2011 elections and eking out an extraordinary one-seat victory.

On the morning of Tuesday, March 1, the Electoral Commission of Jamaica (ECJ) posted on Facebook:

Final Counting of Ballots for General Election 2016
[…]
The conclusion of the count for the constituency of St. Thomas Western on Monday, February 29 marked the final counting of ballots in all 63 constituencies for the 2016 General Election. Of the 63 seats contested, the Jamaica Labour Party (JLP) holds the majority with 32 and the Peoples National Party (PNP) the remaining 31.

JUST IN: Jamaica Defence Force issues “special call out” of all reserves for one week starting Monday. Story coming up.

However, there have been no reports of unrest since the election results were announced.

‘WE determine what is important. WE tell you what we want to discuss’

There was some confusion and discussion on voting procedures (especially the marking of the ballot) as counting continued over the weekend, with unfounded rumors and speculation rising to a crescendo. In the midst of this, private sector leader Chris Zacca pointed out on Twitter:

Please all be factual and calm at this time see the facts below. The EOJ are the only ones who can state the facts https://t.co/9NrxXH3JQ6

As soon as the election results were confirmed, commentators and observers were quick to conduct post mortems on the People's National Party (PNP) loss and the factors behind it.

I am eagerly anticipating the elector analysis that will be published in a few weeks as promised by the Electoral Office of Jamaica. I could be wrong, but I think that the record low voter turn out would have been worse had it not been for the youth vote and the #articulateminority. I think that naturally larger base of PNP supporters, unable to vote for the PNP in the face of their display of arrogance, opted to stay home, as they would rather die than vote for the JLP. My assumptions only. We'll see once the data is published.

The defeat of the PNP in this particular election signals a change that will forever shift the paradigm that defines politicking in Jamaica. And it's for the better methinks. It is a little harder to bamboozle the electorate, Guys. We have information. We spread information. WE determine what is important. WE tell you what we want to discuss. IGNORE US AT YOUR PERIL!

My own 20 year old daughter voted for the first time, and so did many of her friends. I scrolled her Twitter timeline with keen interest and many ‘Ohhhhhhs’ realising that our very own millennials had strong views about the PNP, JLP and voting.

A well-known PNP supporter and regular Twitter user wrote passionately on errors made during the campaign, concluding:

Right now Jamaica’s elite are already cackling with delight and rejoicing over the fact that they won’t have to rub shoulders with so many hurry come ups made rich by the PNP government. The party needs to get back to [late Prime Minister] Michael Manley’s principles and stop kissing up to people who will only smile in our faces and laugh behind our backs. We need some introspection as a party.

‘Instead of whining about problems, make positive contributions’

Looking ahead, energetic discussion continues in traditional and social media on the way forward for the new administration. Suggestions, recommendations, wishes and hopes abound, with the overall consensus being that the government of newly elected Prime Minister Andrew Holness, who was was sworn in March 3, must seek to do things differently to ensure the Jamaican public's trust.

@AndrewHolnessJM your administration needs to truly focus on environmental management. The JLP isn't known for this, and it needs to change.

Responses to her tweet ranged from the need for greater accountability and transparency to urgings to cut corruption and government waste and encourage economic growth and sustainable development. Shields herself emphasized the need for better communication — via social media — by all government members.

I wonder if Mas Andrew going be the one to stop the witch hunt of public servants based on political leanings. #grownupgovernance

Food journalist Jacqui Sinclair echoed many Jamaicans’ desire for the government to put the people first, but also advocated for greater citizen participation:

Jamaica first. Instead of whining about problems, make positive contributions and speak blessings on the country versus doom and gloom.

To all my followers. I firmly believe we were able to change the national conversation via social media. Be proud. But don't be complacent!

His administration has also used Twitter and Facebook to highlight preparations by the incoming government. Jamaicans will be keen to see if their social media efforts continue once the dust of political change settles.