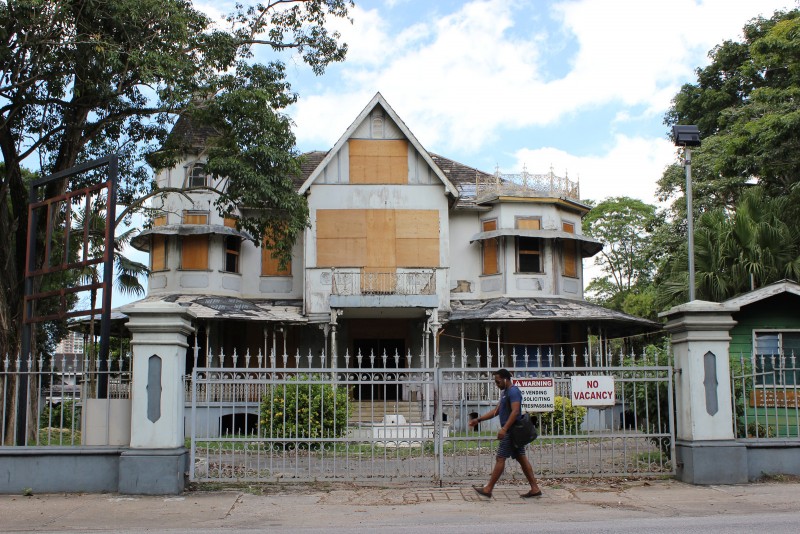 After years of neglect, Mille Fleurs (French for “a thousand flowers”), also known as Prada House, might soon come crumbling down. This once-elegant Trinidad mansion is the third in a stretch of properties crafted in an array of eclectic architectural styles and built during the colonial period. Known as the Magnificent Seven, these grand residences border the western side of the Queen's Park Savannah in the capital, Port of Spain, and are a great attraction for locals and visitors alike.

Mille Fleurs, however, is in such a disastrous state — with rotting floors and a temporary galvanised roof — that it may very well be unsalvageable. Other historical buildings in urgent need of restoration in the country are the President’s House, Red House (the former seat of Parliament), Whitehall (traditionally used as the Office of the Prime Minister) and Stollmeyer’s Castle, which will collectively cost the government hundreds of millions of dollars, according to a recent report.

Since 2013, the previous People's Partnership administration promised to restore Mille Fleurs after citizens inquired about the dilapidated state of the early French Renaissance-esque abode. At the time, the Cabinet approved TT $700,000 (about US $110,000) for “emergency stabilization” of the building, according to former Minister of National Diversity and Social Integration, Clifton De Coteau. There was even an expected completion date of March 2015. Instead, Mille Fleurs was left to deteriorate further.

Journalist Judy Raymond, upon learning of the possibility that the home may be demolished, tweeted:

Tragic. Inexcusable. Why did so many govts wait so long? https://t.co/rS8EqFbqQg

According to a newspaper report, “project managers for the building said it may need to be completely reconstructed.” But Citizens for Conservation Trinidad and Tobago, an organisation that lobbies for the protection and preservation of the many aspects Trinidad and Tobago's architectural heritage, stated otherwise in an update posted on its Facebook page:

I wish to correct a statement made recently that Mille Fleurs may have to be demolished. The statement is extremely misguiding as Mille Fleurs’ demolition has never been discussed, neither is it considered warranted. The main structure is generally sound, but there may be parts of it that will need to be re-built.

Renowned builder George Brown constructed Mille Fleurs in 1904. It changed hands a meagre two or three times until, in 1979, the government purchased the property for approximately TT $1,000,000 (approximately US $154,000 by the current exchange rate). The building has not been occupied or renovated for over 20 years and a decision still hasn't been made on whether or not it will be demolished.

Despite the country going through a recession since late last year, Planning Minister Camille Robinson-Regis said that “the government was prepared to spend money to fix the historical properties” and criticised the former administration for neglecting their duty in this regard. However, some Facebook users found it unusual that the government has the money to fund this project. Chris Arshad Hosein left a comment asking:

I thought they say the treasury empty and that's why they can't utilize the Children's Hospitals or give laptops or scholarships? How they finding money to do all this? It's either they're lying about the treasury being empty or their priorities are way WAY off.

what a sad state of affairs. Here it is we have a brand new hospital that we cannot occupy and our historic buildings are left to dilapidate. So focused was the last gove[r]nment on buying our favour that they neglected our legacy.