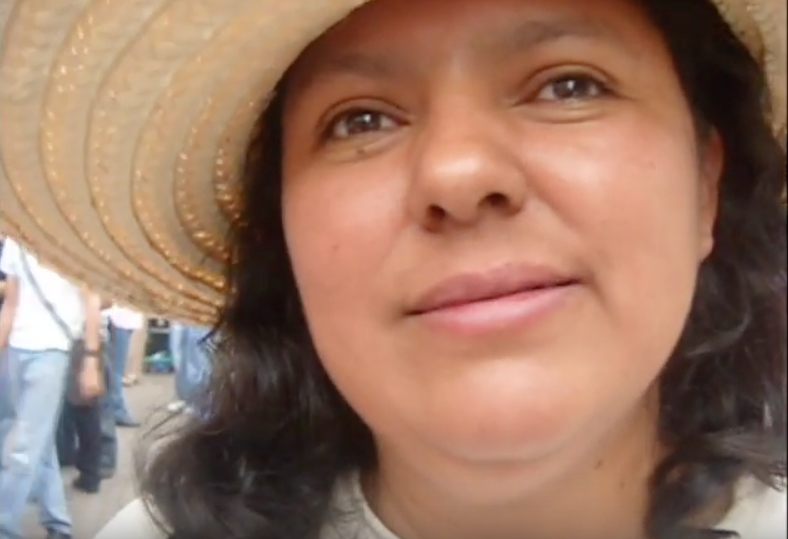 After years of environmental activism and fighting for indigenous communities, human rights champion Berta Caceres was assassinated in Honduras on March 3, as reported by SOAWatch:

At approximately midnight last night, the General Coordinator of COPINH, Berta Caceres was assassinated in her hometown of La Esperanza, Intibuca. At least two individuals broke down the door of the house where Berta was staying for the evening in the Residencial La Líbano, shot and killed her.

World-renowned for her activism, Caceres won the the Goldman Environmental Prize last year for successfully stopping the construction of a major river dam. With the honor came a stream of death threats, as noted by the press release that accompanied her award:

What [hasn’t] stopped are death threats to Cáceres. Her murder would not surprise her colleagues, who keep a eulogy—but hope to never have to use it. Despite these risks, she maintains a public presence in order to continue her work. In a country with some of the highest murder rates in the world, Cáceres hopes the victory in Agua Zarca will bring hope to activists fighting irresponsible development in Honduras and throughout Latin America.

The organization “Witness for Peace” summarized what forces Caceres went up against, when she opposed the dam:

Following the US-backed coup in Honduras in 2009, the floodgates for selling off Honduran land and natural resources to transnational and national corporations blew open. For example, the coup government granted 47 hydroelectric dam concessions with a single law, without consulting the communities that would be directly impacted and thereby violated international conventions including the International Labor Organization’s (ILO) convention 169 that requires the Honduran state to defend indigenous land and natural resources and prevent their forced displacement.

In just the past few days, Caceres’ organization, COPINHHONDURAS, spoke out against repression aim at indigenous communities, sharing evidence of the dispossession of the Lenca community:

A chronology of dispossession: lands are being grabbed from more Honduran Lenca communities

The UN Special Rapporteur on Indigenous Rights has also highlighted the abuses against the Lenca community and its struggle for a better environment. During her recent visit to Honduras, she stated:

In the course of the visit and my examination of the situation of indigenous peoples, I observed the critical situation faced by them regarding their rights on their lands and natural resources, violence, impunity and corruption, access to justice and lack of adequate social services including in education and health.

Honduras, which is plagued with endemic corruption, has a horrendous record when it comes to the murder of environmental activists and women. Organizations from all over the world are urging the Honduran government to take immediate steps to address the issues to which Caceres devoted her life. Activists are also appealing to other countries to put pressure on Honduran officials, who just launched the Honduran Commission Against Impunity.

There are hopes that the commission could be an opportunity for the government to prove its political will. For now, all that's clear in the aftermath of Caceres’ murder is the nation's desperate need for some mechanism to help stem the tide of violence, corruption, and impunity.