No Country for Bhutan's Fatherless Children 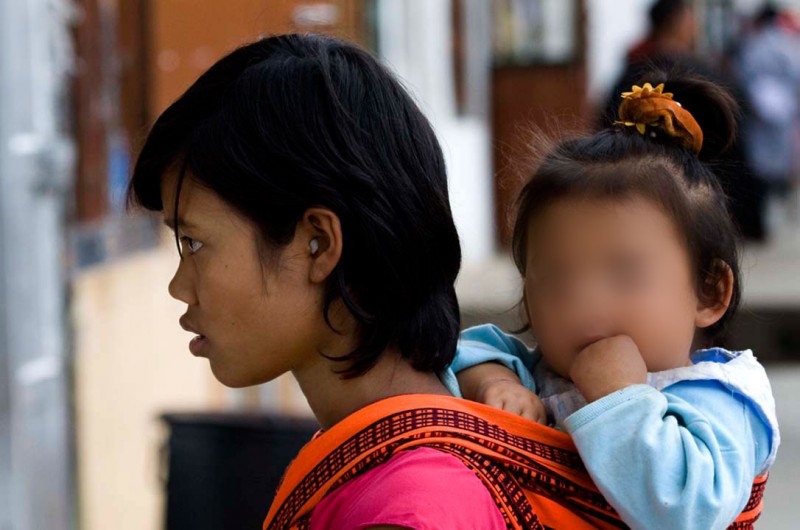 A mother and her child in Bhutan. Photo: Steve Evans / Flickr. CC 2.0. Edited by Kevin Rothrock.

The Himalayan nation of Bhutan, with a population of about 750,000 people, is known for the phrase “gross national happiness”—a slogan coined in 1972 to represent the country's commitment to that serves Buddhist spiritual values instead of Western material development. Bhutan's strict citizenship laws, however, aren't doing much to boost happiness these days, as thousands of Bhutanese children abandoned by their fathers have been rendered stateless according to Bhutanese laws.

A person, both of whose parents are citizens of Bhutan, shall be a natural born citizen of Bhutan.

Making matters especially difficult, children whose fathers are unknown or children with one parent who is not a citizen cannot get registered in the national census. It is not possible in Bhutan to apply for government services, own property, or obtain a passport for travel abroad if you don't have citizenship papers.

Vishal Arora, a journalist, writer, and filmmaker, based in New Delhi, has published a documentary on the issue, as part of a campaign called Media Project:

Abandoned by their fathers, these children are brought up by their mothers, who endure financial hardships to raise them and yet fail to ensure a good future for them.

For, Bhutan requires the legal identity of a child’s father before granting him or her citizenship rights.

These mothers and their fatherless children are paying the price for growing alcoholism and the misuse of the age-old tradition of nightly dating, called “Night Hunting,” the two key reasons behind the high incidence of unprotected premarital sex.

The fate of these fatherless children is uncertain because of delays in Bhutan's registration process when a mother is unable to identify her child's father. Abortion is illegal in Bhutan, except in cases of rape, incest, mental health risks, or threats to the mother's life. As a result, many women resort illegal abortions or cross the border into India to terminate a pregnancy.

I find more compassion in abortion; killing a cell for the sake of a woman’s life, and liberating both the mother and the child from depth of mistake. Abortion is not an ice cream that everybody would enjoy if made free, it is but the only option left when everything seems wrong. No woman will go for abortion for pleasure.

Yeshey Dorji writes in his blog:

Centuries of societal indoctrination has numbed our mind into believing that a child born out of the wedlock is, without contest, fathered by the husband of the woman bearing the child. This belief is so deep rooted in our consciousness that to suggest otherwise is anathema. But if you were to contemplate this matter a little deeper, you will realize that this is a fallacy of gargantuan proportions. The truth is that no one, but a mother alone may testify to the veracity of the fact. For all you know, the child could have been secretly fathered by someone from Timbuktu.

This brings us to the realization that where the Bhutaneseness of a child is needed to be established, nothing can be as authoritative and genuine and genetically pure as that of the Bhutanese mother who bore the child. Since there is room for duplicity, I think it is erroneous to set the criteria that the father of the child ought to be a Bhutanese for the child to qualify as a Bhutanese.

Sonam Ongmo writes in her blog:

Apart from having to deal with the cowardly men who have made them pregnant, and leave both woman and child in limbo, the least she should have to deal with is the government doing this too. Why should a woman have to prove who the father is in oder to avail citizenship for her child? What if the woman was raped? And even if she wasn't, what prevents her or her child from being a citizen? It is inhumane to put a woman through this!

A benevolent law should not encourage gender bias and unequal treatment. We have always been a matriarchal society and thus, it is not in our character to treat our women as if they were second class citizens. Our laws should give them the same dignity, right and freedom as those that are accorded our men.

It remains to be seen whether the Bhutanese government will reform its rules and regulations, or if women can look forward to more of the same hardships they face now.