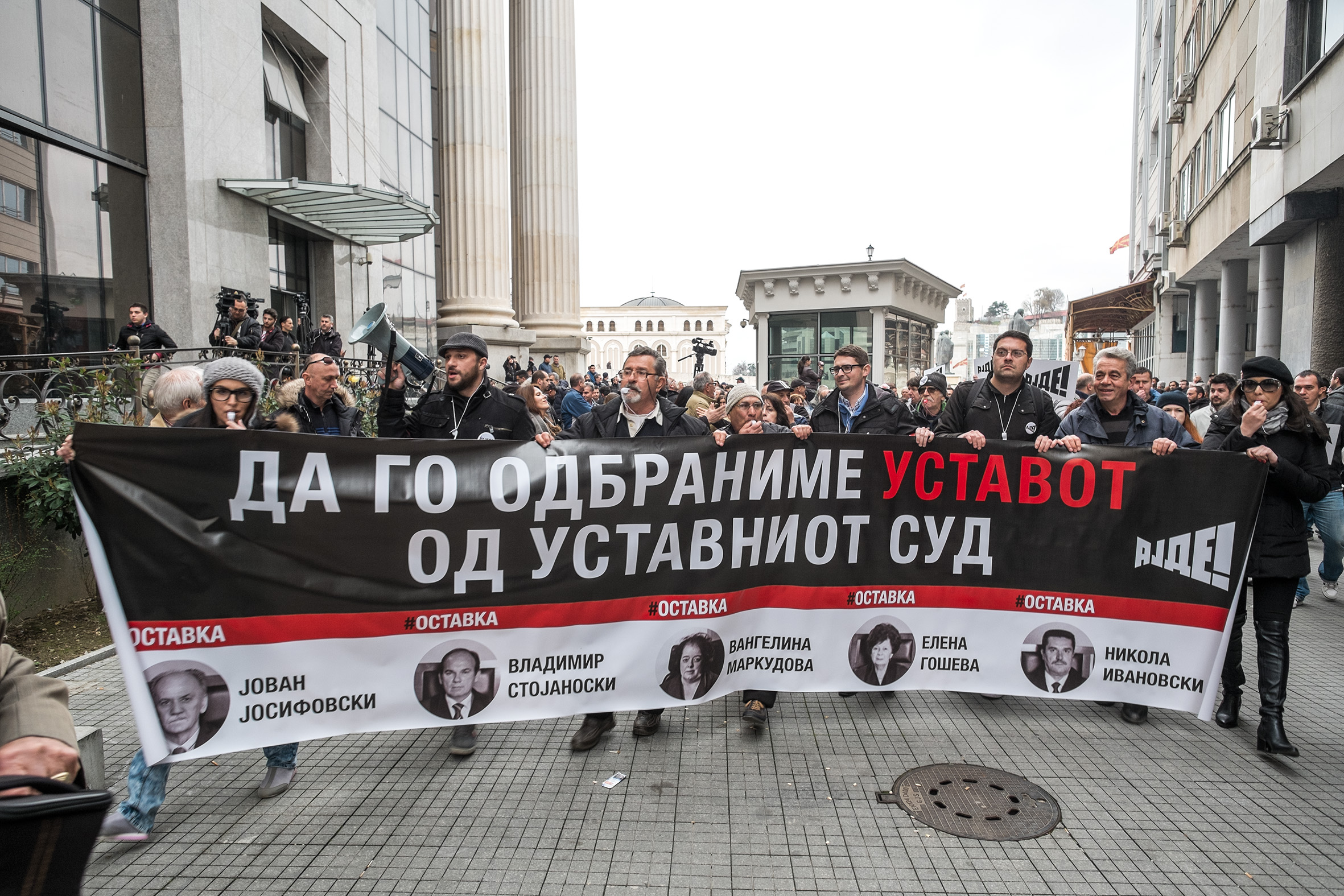 Several hundred citizens of Macedonia protested in front of the Constitutional Court in Skopje on February 29, demanding that the justices who support an initiative to allow the pardon of high crimes, including election fraud, child molestation and terrorism resign from their post.

These crimes have been exempt from presidential pardon since 2009, but recently the court agreed to conduct hearings on possibly removing the restrictions against them.

The demonstration was part of a series organized by the civic platform Ajde! under the motto “Let's defend the Constitution from the Constitutional Court!” Unlike the previous protests, this one took place during work hours. The protesters chanted slogans such as “Resignations,” “No justice, no peace,” “Gangsters,” and “Party-owned state” as well as held banners that read “Servants of the criminals!” One of the loudest cries was “Soiled court!”, a play on words in the Macedonian language, since there is a vague similarity between the word “constitutional” and the word designating the state of being soiled with excrement.

The protesters have named and shamed the five justices out of nine who approved deliberation of the initiative, which comes at a time when top Macedonian officials are under investigation for allegedly rigging elections in 2013 to guarantee that the ruling VMRO-DPMNE party won. The five — Jovan Josifovski, Vladimir Stojanoski, Vangelina Markudova, Elena Gosheva and Nikola Ivanovski — reportedly have personal links to VMRO-DPMNE that protesters say influenced their vote to consider the proposed change to pardons. Some cases can languish months or years before the court even agrees to consider them. This time, it only took 19 days.

On social media, many others followed the example of Vlatko Vasilj, who tweeted an image with photos of the five.

Justice is blind, but injustice has a face. Not one, five of them!

Pardoning for #ElectoralFraud is killing #Democracy in its core! How soon will it abolish itself!? #ConstitutionalCourt #Macedonia

Though there were a lot of media workers at the scene filming the protest with dozens of cameras, few TV channels and newspapers gave coverage to the event. Protesters took to social media to create awareness instead. Some alleged that covert pro-government trolls were flooding Twitter timelines with Oscar-related retweets as a distraction, and called upon passive critics to join in the effort against the court.

Andreja Stojkovski tweeted his photo with Gjorgje Marijanovikj, a retired law professor and one of the harbingers of democracy in contemporary Macedonia, who also joined the protest.

Because of him I am proud of my diploma. Today I met him in front of the Constitutional Court, he came to hold a lecture.

Citizens excreting pressure upon judiciary by demanding the judiciary not to pardon criminals? Indeed, it's a terrible pressure to uphold the law!

It's very interesting to retweet stupid tweets during a protest, to lose its point. Okay, you “neutral ones”, OK! I protest!

A small delegation of protesters delivered a letter with their demands to the court after being allowed to pass through the police cordon. Then some members of the crowd threw toilet paper rolls above the heads of the police, towards the court entrance.

Several protest participants held speeches, including human rights expert Žarko Trajanoski, journalist Petrit Saracini and number of activists from various parts of the country, such as Aleksandar Dojranliev from Gevgelija and Vladimir Hristovski from Veles.

Actress Simona Spirovska read the satirical poem “Ode to Emperor Nikolay” (referring to ex-Prime Minister Nikola Gruevski, who recently resigned his post as part of a deal to end political crisis fueled in part by revelations that his government illegally wiretapped thousands of people) by the playwright Jugoslav Petrovski, ending with the anti-fascist slogan “No pasaran!” (“They shall not pass!”)

While the protesters mainly focused on a possible pardon for election fraud, civil society organizations from Macedonia have also raised the alarm over the other crimes that would be elegible for pardon. For instance, Dragi Zmijanac, the president of Megjashi, an NGO defending children's rights, stated that the decision to allow pardon for pedophiles and rapists is both “scandalous and absurd.”

After the protest, some of the participants reported that they'd been subjected to various forms of aggression by private security guards on scene contracted by the court. Others said they received ominous messages online. Vladimir Hristovski said after publishing video he took at the demonstration, he received a phone call from an unlisted number in which the caller threatened his and his mother's safety and a handwritten “last warning” message on his doorstep. He also said someone posted a call for his “extermination” in a buy-and-sell Facebook group with over 130,000 members. 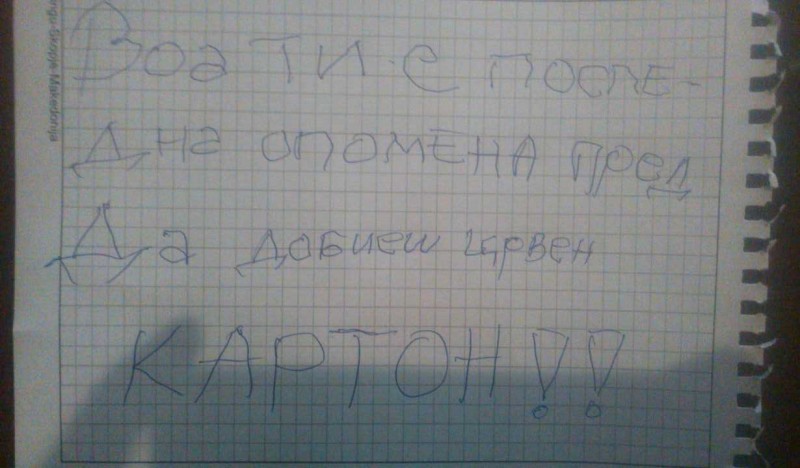 “This is your last warning before receiving A RED CARD!” Note received by activist Vladimir Hristovski after the protest, written in the dialect of his hometown Veles.

Ajde! activists promise they will continue the protests until their demands are met. The next one is tentatively scheduled for Saturday, March 5.