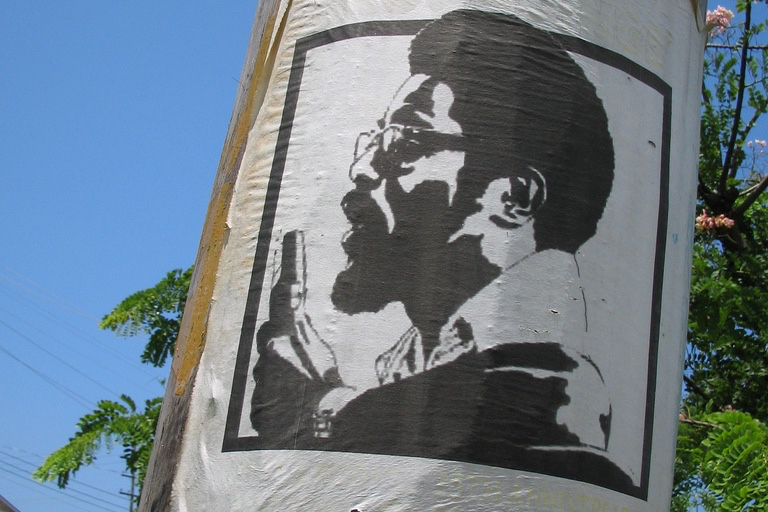 June 13, 1980 was a dark day in Guyana: Walter Rodney [2], a prominent historian, academic and political activist, was assassinated.

No-one was ever convicted for the murder, but many of Rodney's friends and part of the country's intelligentsia suggested that his death was politically motivated. The regime of then-President Forbes Burnham [3] claimed that the car bomb that killed him was made by Rodney himself, saying [4] he intended to use it to release men imprisoned on treason charges. The country's opposition — echoed by Rodney's brother, who was injured in the blast — maintained that the bomb was planted in a radio given to Rodney by a sergeant in the Guyana Defence Force [5].

Donald Rodney-brother of #WalterRodney [6] via SKYPE from #Trinidad [7]. He was with his brother the day he was assassinated pic.twitter.com/dsVh9sx2wt [8]

Thirty-six years later, the findings of a Commission of Inquiry [10] into the murder has finally vindicated the views of Rodney's supporters, ruling that [11] “the Burnham Government had been directly involved in Rodney’s assassination”.

‘An indictment’ against the Caribbean community

Journalist Raffique Shah, a former trade union leader and lieutenant who led a 1970 army mutiny against the backdrop of Black Power riots in Trinidad and Tobago, called [11] the commission's findings “an indictment not only against the Forbes Burnham dictatorship that ruled Guyana for 21 horrible years, but also other Caricom governments and countries that never condemned Burnham’s atrocities”:

More damning, the report implicated Guyana’s Police Service and Defence Force in the plot to kill Rodney, and afterwards to suppress investigations, destroy evidence and ex-filtrate the assassin, soldier Gregory Smith, and his family to French Guiana on a military aircraft.

Rodney, more of a socialist along the political spectrum than anything else, had been quite critical of the region's middle class and the spineless position it took with regard to building a more equitable society post-independence. He soon grew involved in Pan-Africanism [15] and became a recognised figure in the Black Power movements throughout the region and in North America.

Shah, who had been a friend of Rodney's, chronicled the activist's work and explained why he was a threat to Burnham's People's National Congress (PNC) [16] government:

Rodney was a Guyanese patriot, the consummate Caribbean Man and a leader who, had he lived, might have healed the racial divide that has haunted Guyana’s politics for much longer than it has [Trinidad and Tobago]’s.

His book ‘How Europe Underdeveloped Africa’ is a classic in colonial and post-colonial politics and economics.

And his innovative method of imparting knowledge and stimulating the minds of the masses by leaving [University of the West Indies]’s Mona campus where he lectured to “ground with the brothers” in urban Kingston in 1968—which led to him being expelled from Jamaica—was one spark that helped ignite black consciousness across the Caribbean, leading to the events of 1970.

Such a man could not be allowed to live. Not in Guyana where Burnham, who was installed in power in 1964 by the British and United States governments through rigged elections—I shall direct doubters to hard evidence if they wish—and whose political life depended on keeping Indo- and Afro-Guyanese at each other’s throats.

So Rodney, who attracted support across the race-divide, had to die. And Burnham thought nothing of killing him. Something we, Walter’s friends, knew all along.

‘His ghost stalks the incumbent government’

Indeed, Rodney's hope — via the Working People's Alliance (WPA) [17], a political party that offered the strongest challenge to the PNC government — to unite the country's two main ethnic groups that had been completely disenfranchised by both colonial and post-colonial governments, was a serious threat to the foundation upon which Burnham had structured his power.

Burnham understood the risk and tried in various ways over the years to intimidate and silence Rodney: blocking his appointment as a professor at the University of Guyana in 1974; arresting him for arson after two government offices were burned in 1979. But Rodney was unstoppable and the tide of support was turning, despite the fact that neighbouring governments largely tolerated Burnham.

Shah's post also made the point [11] that although successive regimes in Guyana did convict “some of the criminals who had acted on Burnham’s behalf”, Rodney's ghost has continued to haunt the country:

His ghost stalks the incumbent government: President David Granger leads a coalition that includes the PNC and ironically, the WPA.

Also, Granger is a retired brigadier, so he must have been a junior officer in 1980 when Sergeant Smith orchestrated Rodney’s death. Did he know of the plot?

And what would Rodney make of his one-time comrades in the WPA being in alliance in government with Burnham’s PNC?

Interestingly, many found [18] President Granger's response to the findings of the Commission of Inquiry contentious. The president reportedly called the report “flawed”, suggested that it was based on “hearsay”, did not reflect the “truth” and that it would be challenged.

The Justice for Walter Rodney Committee weighed in on the president's comments and called [19] for him to release the full contents of the report to the public, saying that the information it contained was “vital to […] the health of the society.”

Dr. David Hinds, who had been one of Rodney's comrades, argued in a letter to the editor in the Guyana Times newspaper [26] that “whatever its shortcomings”, the inquiry was significant for a few reasons:

There are some lessons to be learned from the findings of the Commission. First, these findings are an indictment of our State. Our post-colonial or independence state, replete with all the characteristics of colonial domination has been the antithesis of independence. We have failed miserably in the area of human-rights for our weak, our powerless, our sufferers and those who dared to stand with them. We in Guyana and the rest of Caribbean never learned how to deal with dissent in our politics. As a society we are products of resistance, but we have used the state to assassinate resistance at every twist and turn. […]

We will hear the responses and counter-responses to the verdict of the Commission. […] The findings will be discredited by some. But, I hope that these findings do not become a source of further conflict but an occasion for bringing the country together.