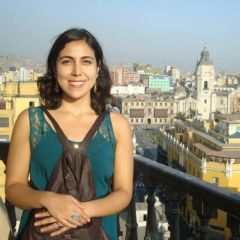 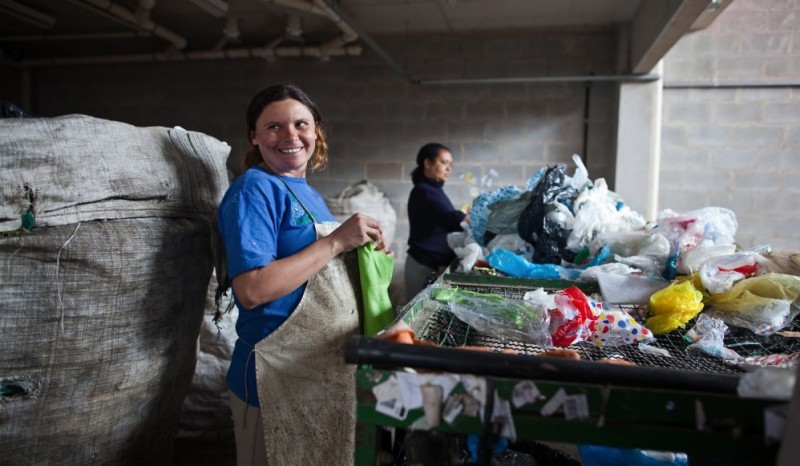 Recycler at a collection center in Bogota, Colombia, one of the most advanced countries in the region in legislation and recycler appreciation. Photo by the Regional Initiative for Inclusive Recycling. Used with permission.

You may not know it, but in Latin America and the Caribbean alone, around 4 million people making their living as waste pickers, according to figures from the Regional Initiative for Inclusive Recycling (IRR). Every day, these men and women collect, select, retrieve and sell solid waste from primary sources, which could be private homes, commercial or industrial sites, or even collection centers such as landfills.

March 1 is International Waste Pickers’ Day. On this day, recyclers, as they are also called, seek to highlight the importance of the role they play as well as lobby governments for more protection and more inclusive waste management polices.

Recyclers make many contributions through their work, including creating jobs and reducing municipal spending on waste management, all of which has a positive impact on local economies. Recyclers also provide a valuable service that contributes to protecting the environment and public health: 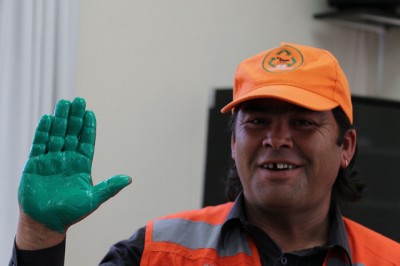 Waste pickers provide the Latin American recycling industry with between 50% to 90% of its solid material, more than any other source, according to the IRR. But despite being the backbone of the industry, they only receive about 5% of the profits made.

This alarming figure is explained by the limited inclusion of recyclers in waste management policies, weak regulations supporting their work and the informality of their profession. A situation that has been well illustrated by the president of the National Network of Recyclers of Ecuador, Laura Guanoluisa for her country:

ECUADOR: There is no law that promotes INCLUSIVE RECYCLING for waste pickers. Yes, there are municipal policies, but those do not apply. -Laura Guanoluisa

The difficulty of accessing waste is the main threat that we RECYCLERS in ECUADOR are facing. -Laura Guanoluisa

A tragic past, working toward a better future

International Waste Pickers’ Day falls on the anniversary of a tragedy that exposed the vulnerability of those who collect waste. On March 1, 1992, 11 recyclers were killed in a Colombian university, which they had entered under the promise that they would receive donated waste material. However, the real purpose was to harvest and profit from their bodies.

To commemorate their deaths, 34 countries gathered at the International Meeting of Recyclers in 2008 and established this date as International Waste Pickers’ Day.

March 1, 2016 #InternationalWastePickers'Day One guild, one fight!

Currently, the recyclers of Latin America are organized under the LACRE network (Latin American Network of Recyclers), and have made progress in recent decades in raising awareness of their work and their contributions to the economy and to the sustainable development of their respective countries. The video below, titled “Where everyone throws things away, we create”, shows some members in different parts of the region presenting some of their ideas for fostering an even stronger contribution: 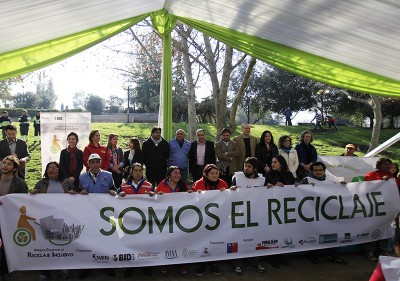 Progress has been made in Chile towards an inclusive recycling model in four communities in the capital city, thanks to alliances between waste pickers, local governments and the private sector. Photo by IRR. Used with permission.

Along with seeking the protection and formalization of these workers, recycler organizations campaign for solid waste management that’s more comprehensive than simply moving trash from dumpster to landfill.

One of these experiences is the IRR which has sought to influence the public policy debate on waste in 16 countries in the region. Since 2011, this group, through municipal and national projects, has worked to train and formalize waste pickers as well as create tools for inclusion, which they say has directly benefited more than 17,000 recyclers in the continent.

For these organizations, waste picking represents more than just a source of income (although that certainly is important). Well-managed recycling can help boost the local economy and protect the environment and public health — if everyone with an interest works together.