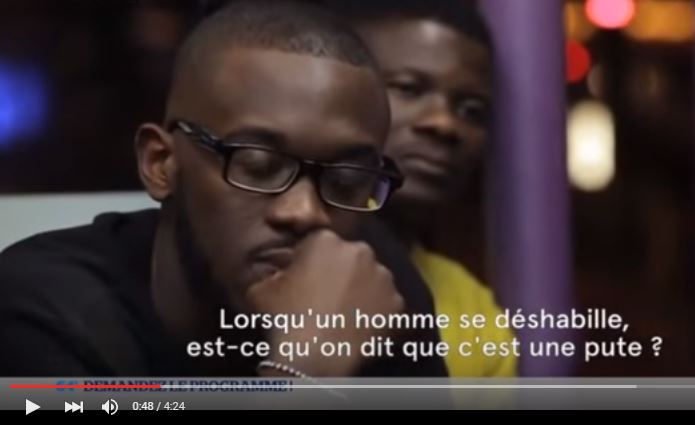 ‘When a man shows a bit of flesh, do we call him a whore?’  Screenshot from the web series “Barber Show”

When a man shows a bit of flesh, do we call him a whore?

The web series “Barber Show” is awash with such outspoken comments. This one in particular is taken from an episode which deals with sexism in show business. “Barber Show”, the creation of Hugues Lawson-Body, plunges viewers into the African neighbourhoods of the 10th arrondissement of Paris.

The documentary series is filmed entirely in an African barbershop called Lucky Coiffure (Lucky Hairdo), where the relationships that are forged amongst regulars are as important as having the freshest hairstyle on the street. Babs, a barber of Ghanaian-Nigerian origin, manages Lucky Coiffure with the help of friend Gaye, who mediates a range of debates with the clientèle.

Hugues Lawson-Body is the producer of the series. He was born in Togo and raised in Paris from a young age. A talented and reputed photographer, he has travelled the world capturing some of the best known celebrities, from actor and director Spike Lee to right-wing French politician Jean-Marie Le Pen.

Despite this international success, his favourite past-time is closer to home: photographing the youth of Paris. This led to his discovery of Lucky Coiffure and its cosmopolitan microcosm. Lawson-Body decided to film daily life in the barbershop, where conversations often reflect debates happening elsewhere in society. Six episodes have already been filmed and no subjects are off limits, from the lightest, such as the rivalry between American rappers Jay-Z and Kanye West, to the most dramatic, all seen through the eyes of barbershop regulars.

At times, the generally good-natured and light-hearted atmosphere can become tense. This was certainly the case in an emotionally charged episode titled J'ai deux amours (I have two loves), filmed on November 13, 2015, following the coordinated attacks in Paris that left 130 people dead. The nightmare begins as friends and customers at the barbershop are watching an international football match between France and Germany on TV. As news of the attacks begins to flood the screen, those in the barbershop are shocked. Emotions run high.

Géraldine, a hospital worker, recounts her personal experience during the attacks, as well as her fears and her reaction. Babs asks if Géraldine has hung a French flag on her balcony (a popular display of solidarity and defiance following the attacks). Géraldine retorts that she has no need for a flag to prove her French identity. Babs then preempts an argument about the disparity in media coverage with violence elsewhere in the world, for example, in Nigeria and Lebanon. He explains:

I live in France: what affects France affects me too. That's not to say that I don't sympathise when this sort of thing happens in Africa, but the distance means that you don't feel the same emotions.

This episode has been viewed over a million times. Another episode focuses on the style of dress of black American celebrities. Gaye thinks that singer Beyoncé may have had a different reputation if she dressed in another way. His friend explains to him that by dressing as she does, Beyoncé defends the right of women to dress as they wish:

[She] has the right to dress sexily to protect her business, but she is also defending the values of being a women. When a man shows a bit of flesh, do we call him a whore?

What is the secret of Barber Show's success? Hugues Lawson-Body says he is seduced by the charm and language of the regulars :

[The barbershop] is a neighbourhood institution, a sort of social club. Doctors, drivers, lawyers, entrepreneurs, friends are used to meeting there in the evenings after work. It's a little island of funny friendliness, the ambiance is cool and welcoming and every time I go there I come away feeling great. Every subject is discussed, including those that are sometimes clichéd; from go (women), racism, American rappers such as Jay-Z and Kanye West, even marabouts [fortune tellers of West African origin]

The series shows an under-represented community. The aim was to show the cultural richness of this community.

Facebook users are also positive about the success of the series.

Sofiane Mourier is full of praise for the concept:

I think Barber Show is a great idea; you cover serious subjects with a touch of humour. I really enjoy this type of show and I hope it will continue for a long time to come.

Marie Tsama feels Barber Show is a fair reflection of her life as an African woman in Paris:

You convey everything that defines us. Peace, Joy and Unity. Thank you, my brothers and sisters.