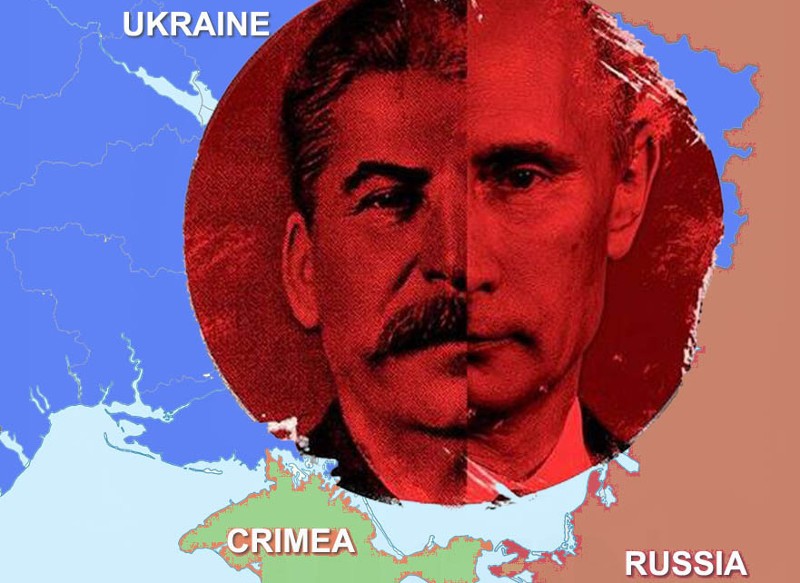 Is Putin akin to Stalin in the eyes of Crimean Tatars? Jamala's Eurovision song sheds light on the issue. Images mixed by Anna Poludenko-Young.

A song about Soviet Moscow’s repressions against the Crimean Tatar community is Ukraine’s entry for the Eurovision 2016 music contest. Though it concerns events that took place over 70 years ago under Stalin’s regime, the online community seems to be discerning hints at Russia's more recent annexation of Crimea.

Jamala’s song, “1944,” tells the story of her own great grandmother. Just like 240,000 other Crimean Tatars (the Turkic ethnic group that historically formed the main population of the Crimean peninsula, also known as Qırımlı), she was accused of being a Nazi collaborator, was thrown out of her home by the Soviet Red Army soldiers, and deported to Central Asia. Not everyone survived the trip in overcrowded trains without food, water or even fresh air. Many Crimean Tatars died on the way there. It was only 40 years later, around 1989, that Qırımlı were allowed to return to their homeland.

“When strangers are coming,
they come to your house.
They kill you all and say
‘We’re not guilty’.”

This is how the song begins (see video with full lyrics in English here).

Although it doesn’t contain a single word about Russian president Vladimir Putin or Russia’s annexation of Crimea in 2014, Jamala has been quite open about where her sympathies lie.

In an interview to AFP news agency before the national content selection finale, she said she wanted people to hear a song written “in a state of helplessness” after Russia annexed Crimea, her home.

“It was hard for me to recall all these memories again and again, but I understand that it is necessary now,” she said. “Because now Crimean Tatars are desperate and they need support.”

Earlier, speaking to Radio Free Liberty, Jamala confessed that she is trying to attract international attention to what Russia is doing to Crimean Tatars. Without this publicity, she said, history might repeat itself.

“Now, Crimean Tatars are on occupied territory,” she said. “And it is very hard for them. They are under tremendous pressure. Some have disappeared without a trace, and that is terrifying.”

#Russia complains about #Ukraine's Eurovision entry. Yep, it's a dig at Russia. And not very subtle https://t.co/Y00Rn2OlqQ #Crimea #Tartars

RU parliament is unsatisfied #Jamala will represent #Ukraine at #Eurovision.Best proof we made good choice!

Russia also got the message the Ukrainian singer was sending. Shortly after Ukraine announced its entry for Eurovision 2016, Vadim Dengin, a Russian lawmaker and deputy head of the State Duma's committee on information policy, said he hoped the organizers of the European music competition would disqualify Jamala.

“A strange choice. I am sure that they (Ukrainians—GV) rigged the vote count, just to offend Russia one more time,” Dengin said in a comment to RIA Novosti news agency. The lawmaker also quipped that ordinary Ukrainians likely wouldn't care for Eurovision at all, because “they aren't being paid enough to afford electricity.”

Another State Duma deputy and deputy head of the culture committee, Elena Drapenko, noted that by choosing Jamala with her song “1944,” Ukrainians are trying to pull all possible strings to provoke Russia. “They are trying to find anything to pick on Russia, anything at all, even Crimean Tatars,” Drapenko said.

Such a reaction from Moscow and a creeping anti-Jamala campaign among residents of Crimea pretty much guarantee zero points from Russia for Ukraine’s performance at Eurovision this year. On the other hand, if Jamala is allowed to perform “1944,” she might bring victory (or at least international attention) to Ukraine and the plight of Crimean Tatars. After all, there are quite a few countries in Eastern Europe and Central Asia that can relate to the experience of dealing with Soviet Russia back in the days to which Jamala refers in her song.

At the same time, it is still a big ‘if’ whether Jamala will be able to perform her song without any changes to the lyrics. As a general rule, Eurovision guidelines prohibit songs with lyrics that have political content.

A Eurovision spokesman told The Telegraph that all songs would be formally examined at a meeting on March 14, 2016. He declined to say whether it was likely that “1944” would be seen as overly political, but previous entries that have been deemed controversial have been banned or asked to alter their lyrics.

For example, in 2009, less than a year after Georgia and Russia engaged in a brief war, and Russia occupied two territories that previously belonged to Georgia, the competition barred Georgia’s proposed entrant from participating because the group’s song lampooned Russian President Vladimir Putin.

So far, Ukrainians at least seem to be pretty content with their choice of the song and the politics and history it represents.

I just cried, jumped and squealed. Jamala is going to Eurovision! This is an example of a person who achieves their goal!!!

Jamala is going to Eurovision. Are you rooting for her?
13% no
73% yes
4% better than Serdyuchka (Ukraine's 2007 Eurovision entry)
10% there's something about her voice

This year’s Eurovision music contest with competitors from around the continent (and beyond) will be held in Stockholm on 14 May, 2016.