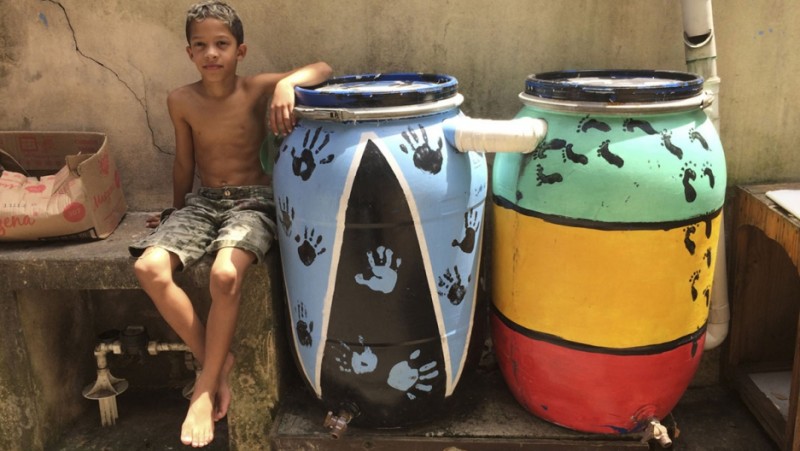 Two of about 50 rain barrels in the Vergueirinho favela in São Paolo, Brazil. Terezinha da Silva taught residents how to build the barrels to conserve water. Credit: Anne Bailey. Used with PRI's permission

This article by Carolyn Beeler for the #HerPlanet series originally appeared on PRI.org on February 24, 2016, and is republished here as part of a content-sharing agreement.

Many of the alleys in São Paulo’s favelas have trash or weeds in them, the things you’d expect in alleys. But one in Sao Mateus, on the outskirts of the city, also has something you might not expect — two brightly painted plastic rain barrels, decorated with kids’ hand and footprints.

Water gets funneled down from the roof above, passes through a filter to catch mosquitoes or leaves, and then settles into the barrel for use in watering plants, cleaning, flushing toilets and other household necessities.

The barrels are the result of a community organizing project begun in response to the São Paulo region’s crippling two-year drought, when water supplies were frequently cut off in many parts of the city and people at the end of the water pipelines — people in places like this neighborhood — often suffered the worst. 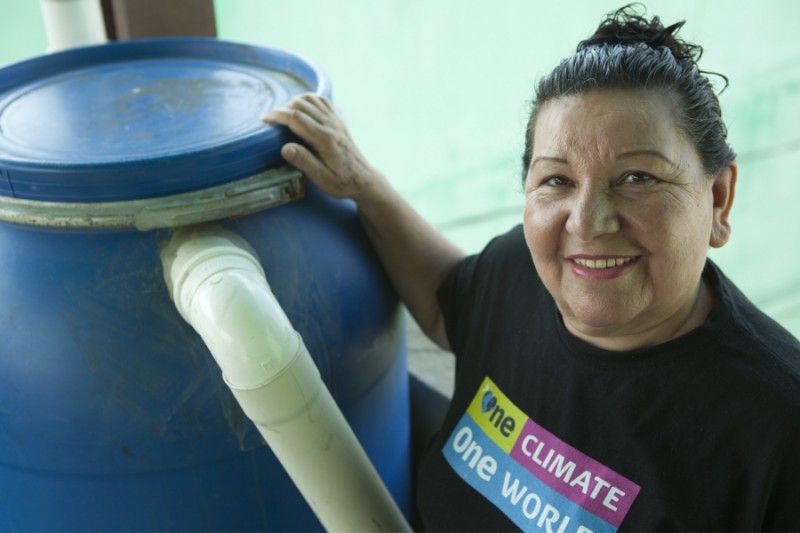 Terezinha da Silva with one of the her signature rain barrels. Credit: Anne Bailey. Used with PRI's permission

But the barrels are also one of the positive legacies of the drought. São Paulo residents were angry about the water crisis. They felt their government wasn’t doing enough to solve it, so many started taking matters into their own hands.

One of them was Terezinha da Silva. Her first name means “little Teresa,” and she's just four-and-a-half feet tall. But she's a force to be reckoned with in her neighborhood.

Da Silva installed rain barrels in the courtyard of her home even before the drought officially began, to save money and have water on hand during shutoffs. But as the drought built, she went on to teach other women in her community how to build these rain barrels too, out of inexpensive and easy-to-find materials. Now there are about 50 in the area. 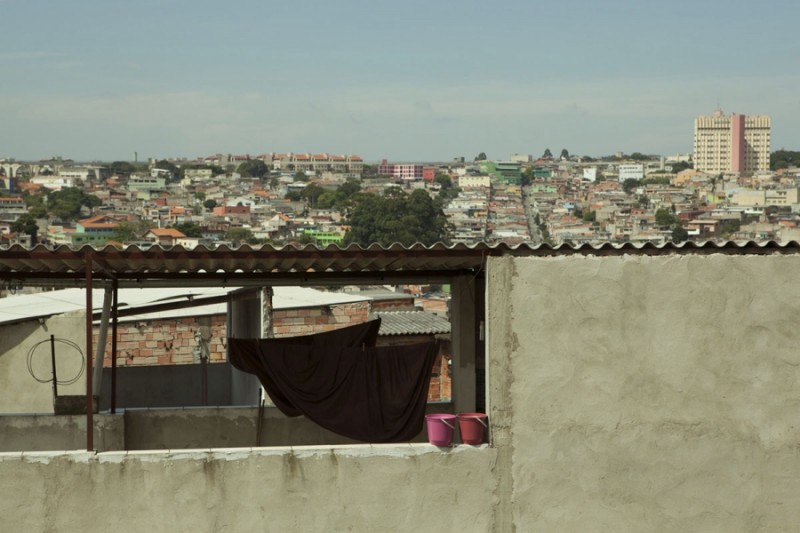 About fifty rain barrels are scattered throughout the Vergueirinho favela in the São Mateus district of São Paolo. Credit: Anne Bailey. Used with PRI's permission

She’s been doing community-building work through a women’s collective she helped found, called “Bread and Art,” which was formed, she says, to help local women “work together in economic solidarity, sustainability, women’s rights and participation by women.”

The “for and by women” idea is vital, da Silva says, because Brazil is a male-dominated society. And, she says, “we know this from statistics and because we’ve lived it — there is a lot of violence against women.”

But she also had personal reasons for wanting to help other women tackle the water crisis and more.

“I do this work with great affection,” da Silva says. “Because I was also rescued. There was a salvation in my life. “

Da Silva started working as a maid when she was 14, and continued for 30 years. Her life felt like it was consumed by work, she says. Then in her mid-40s, she started volunteering and then working with a non-profit that focuses on the welfare of favela residents, Movimento de Defesa do Favelado.

She learned that even though she was poor and a woman, she could change her future.

“When you start to discover your rights, you want to fight! You go in search of your dignity,” she says.  “And that’s especially true for women.”

Da Silva now works full-time with the non-profit she once volunteered for, and she has sprouted a new project rooted in the water crisis and local empowerment: vertical community gardens.

As with the rain barrels, she has some of the very simple technology installed at her own home — rows of plastic water pipes cut in half lengthwise, filled with soil and hung on a wall, where she grows vegetables like chives, basil and peppers. 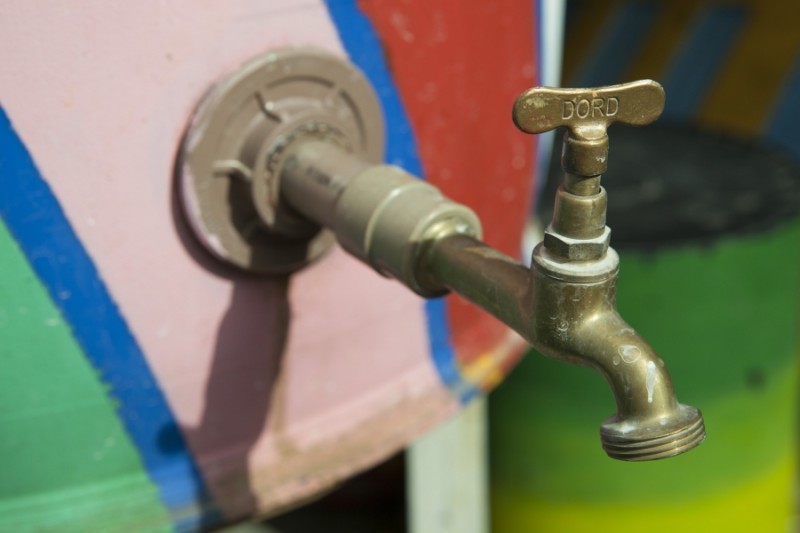 Da Silva keeps three rain barrels in her garden and one in her laundry room to gather water for cleaning, watering plants and laundry. Credit: Anne Bailey. Used with PRI's permission

The goal is to get neighbors working together, while at the same time putting fresh vegetables on their plates.

And again, her efforts are resonating throughout the neighborhood.

“Terezinha is a really important person,” says local resident Maria Auxiliadora, who’s working with da Silva to build a vertical garden on her roof. “She’s a very tough person. Even if she’s sick, or has other problems, she doesn’t worry about her own problems, she just comes and does her work for the community.”

Da Silva says that work saved her. And she thinks the drought in São Paulo may actually have done something to help save the environment.

“A good thing came out of this crisis,” da Silva says. “Awareness. The water crisis came at a time when we needed awareness” — that even in a country with an eighth of the world’s fresh water supply, water can’t be taken for granted.

She’s not the only one who thinks that.

“The population learned that water supply is a very important thing,” says Monica Porto, the state of São Paulo’s deputy secretary of water resources. “You cannot expect simply to open your tap and there is water. Each one of us has a responsibility of saving water.”

Of course, the picture is a bit more complicated than that. Millions of the region’s poorer residents, people in neighborhoods like da Silva’s, never simply expected to open their taps and have water, and they suffered even more during the drought. So there are many here who didn’t need to learn the value of water. 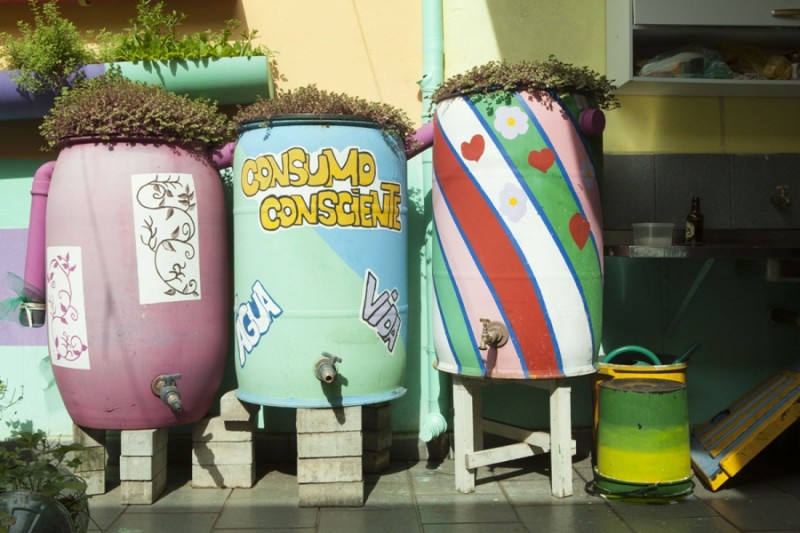 But it’s a lesson the region’s government itself seems to have learned. It’s raining again now in São Paulo, but scientists believe that climate change is disrupting weather patterns here. Porto says the drought helped leaders in the region realize that São Paulo needs a water system that’s better prepared for whatever the future brings.

“We don’t know what to expect of climate change, if the São Paulo region will be a region where there will be more floods or more droughts,” Porto says. “But it doesn’t matter. … After this drought, we know one thing for sure. We have to increase preparedness.”

That means changes big and small — from new reservoirs and a modern distribution system to rain barrels, rooftop gardens and an engaged community.