Hokkaido's Popular Poplar Cut Down Because of Misbehaving Tourists 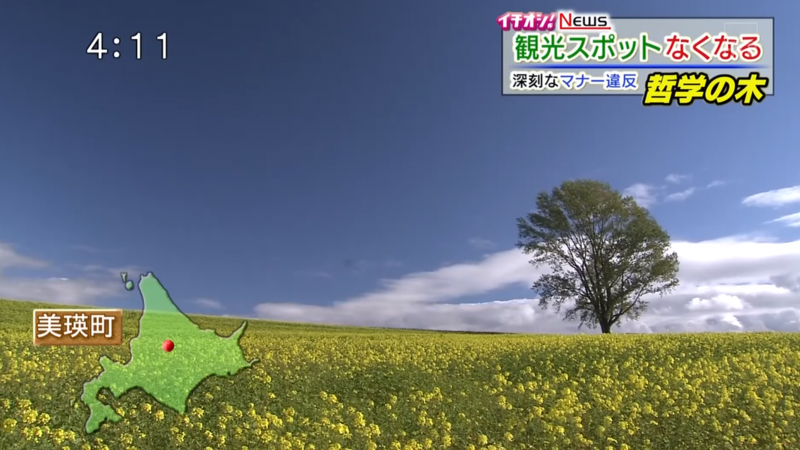 (Captions, from top right) The Philosopher's Tree tourist spot is no more. (Tourists) would not obey the rules.(Biei, Hokkaido). Screenshot from HTB News official YouTube channel.

The decision by a farmer in Hokkaido to chop down an Italian poplar is being lamented outside of Japan. A tourist attraction in a remote, rural setting, the popular poplar even had its own infrequently updated Twitter account.

On February 25, national news in Japan reported that the iconic “Philosopher's Tree” (哲学の木) in Biei, Hokkaido had been cut down by its owner.

The tree had increasingly become a tourist attraction in recent years, with people traveling to visit the tree to snap its picture.

Someone had even sprayed graffiti on the trunk of the tree.

This is really sad. The saddest thing is that the owner of the land had no other choice but to cut down the tree.

While most media would not specifically blame non-Japanese tourists for the bad behavior, Tokyo's TBS News 23 did. One Twitter user posted screencaps of the News 23 broadcast:

[News 23 caption] “Starting from 3 or 4 years ago, foreign tourists started tramping around the field in search of a good photograph.”

Japan is currently experiencing a tourist boom. In 2015, nearly 20 million foreign tourists visited Japan, a 50% increase over 2014, and nearly double the number of foreign visitors to Japan in 2010. There have been several other news reports about “bad mannered” foreign visitors, and a recent survey revealed that two in five Tokyo homeowners think foreigners shouldn’t use Airbnb.

When interviewed by HTB, the local Hokkaido broadcaster, the farmer who owned the land did not say it was the visitors’ bad behavior per se that motivated him to cut down the tree; instead, he claims he was worried that people walking on his fields would introduce disease onto his farm.

Hokkaido is famed for its dairy farms, and in recent years Japanese livestock farmers in other parts of the country have had to deal with disastrous outbreaks of foot-and-mouth disease, which can be introduced to farms by human visitors.

In the interview on HTB, the farmer made it clear that he did not cut down the tree out of spite: 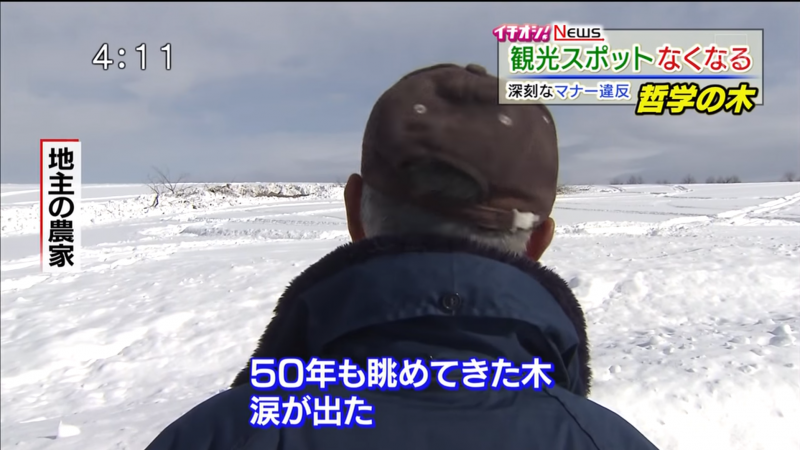 (Captions, left to right) Farmer who owns the land: “I have gazed at that tree for fifty years. I cried (when it was cut down).” Screenshot from HTB News official YouTube channel.

Some tourists were also sad when they learned the Philosopher's Tree was cut down.

It might not be a bad thing for that farmer to cut down the tree (because he could not tolerate anymore). […] However, I still feel sorry for what happened when I read the words, ‘So today a machine cut down the tree.’

Another commenter remarked that not disturbing the farm was just common sense:

I took a photo of this tree from the side of the road. I did not set foot on the farm. If you just used a zoom lens, you would never make the owner of that farm feel too uncomfortable.

Another suggested that tourists should have immersed themselves in the atmosphere or rural Hokkaido instead of just focusing on trying to see the famous Philosopher's Tree:

The Philospher's Tree was not the only beautiful thing about Biei — there's also observing the natural landscape of Biei across the four seasons. If the tourists go to Biei only to see the tree, they would miss a lot of things that would make great memories of the trip.

One Japanese Twitter user posted a poignant message for the now-departed poplar:

Without any doubt we pray that new life will sprout up from that spot. “Farewell, Philosopher's Tree. And thank you.”