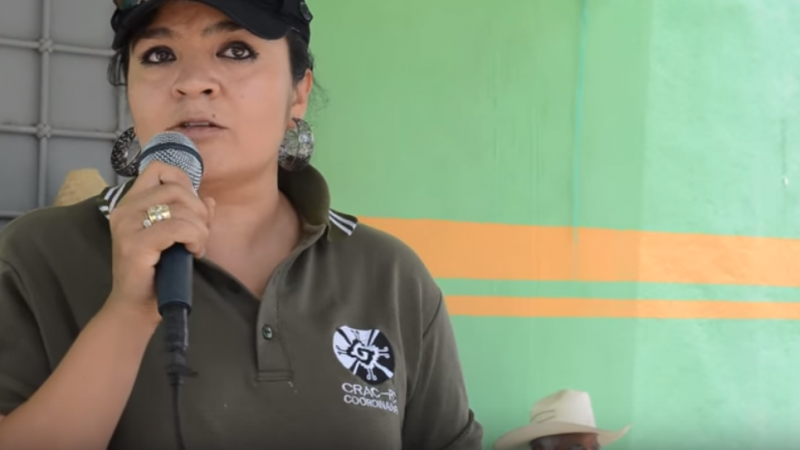 Nestora Salgado delivers a speech during the inauguration of community police in Buenavista, Alpoyeca (in the Mexican state of Guerrero). Taken from the video, “Nestora's Words in Buenavista”, shared on Youtube by user Armahedonmaya.

I'm writing to you from prison, where I've been held for 30 months on charges of a supposed kidnapping that never happened. I, like many political prisoners in this country, am in jail for fighting for peace and justice. That's the real kidnapping here.

With these words, Nestora Salgado, the indigenous activist and ex-director of the community police of Olinalá, Mexico, began an online petition requesting that the respective authorities begin the process of her release. The said petition is one of several actions that have been taken to demand the human rights defender's release, as well as to call attention to the abuses and arbitrary actions committed against her since the day of her arrest on August 21, 2013.

From 2012 until the moment of her detention, Nestora had worked as the director of the Regional Co-ordination of Community Police Authorities (CRAC-PC) for the Mexican state of Guerrero, which was a community system of security and justice created in 1995 to confront crime in the region.

The CRAC-PC, like the large majority of community police organizations, is a type of self-organized alternative security model to institutional police bodies, and is guided by the customs and practices of the people and communities in which it operates. However, in contrast to other community police organizations which operate in Mexican territory, Nestora's organization was recognized by Guerrero state government in 2011 through Law 701, which concerned the “Recognition, Rights, and Cultures of the Indigenous Peoples and Communities of Guerrero.”

The human rights defender's arrest was carried out after an ostentatious operation that included members of the Mexican army, navy, state police, and Olinalá Municipal Police, without proof of any court-ordered arrest warrant issued by a competent authority— nor was Nestora told the reasons for her arrest. From the beginning, the arrest was fraught with irregularities that demonstrated flagrant violations of the right to personal freedom, and it was carried out with a complete lack of respect for guaranteed due process, and other violations of her human rights.

Nestora was arrested together with 30 other members of the CRAC-PC on charges of kidnapping and organized crime. However, said charges were based on actions that were part of the powers and duties of the community police. As the website Animal Político (Political Animal) emphasized:

The leader's defense rejects that any kidnapping was committed, given that the supposed victims were people who had committed some offense to the community, and were arrested by the community police and imprisoned in Olinalá's house of justice.

Likewise, given that the activities of the community police were part of a legally set-up indigenous justice system, the criterion of “organized crime” is not applicable.

By the same token, the authorities have been accused of having arrested Nestora and the other members of the Olinalá community police because of political motivations. In fact, investigator Aída Hernández Castillo reported in the documentary “Mexico: Indigenous Peoples Brought to Justice“, which deals with the criminalization of indigenous justice in Mexico:

It should be noted that in March of 2014, a judge exonerated Salgado of the charges brought against her and ordered her immediate release, recognizing that the defender had been acting legally as a community leader, and that the arrests carried out by the CRAC-PC were, in fact, legally supported by Law 701. However, this didn't lead to her freedom.

In view of the above, groups like Free Nestora Salgado! have intensified their actions and demands, resorting to the use of social networks like Twitter and Facebook to organize solidarity activities in support of the activist. 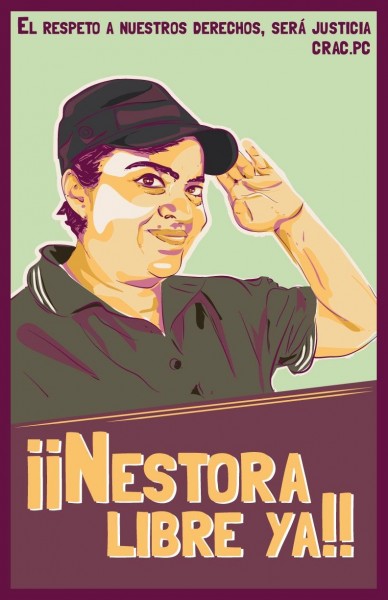 Over the years, several demonstrations and protests have been organized as part of the efforts to bring visibility to the case and demand Nestora's liberation. The protest known as #FreeNestora, which took place in 2015 and was documented by We are the Media, is just one example of these mobilizations:

International organizations have also intervened in favor of the indigenous leader. Such is the case of the Inter-American Commision for Human Rights (CIDH) which, in January 2015, issued a precautionary measure directed towards the Mexican government, asking it to protect Nestora's life and personal privacy in light of the reports it received on the prison conditions she was living in and the activist's deteriorating health.

Likewise, in March of 2015, experts within the United Nations condemned Nestora's treatment. According to information from the University of Seattle's Human Rights Clinic, which leads the international efforts for Nestora (who also has US citizenship):

Seven United Nations experts have contacted Mexico with their desire to protect Nestora Salgado-García, who is a resident of Renton, Washington state. The President of the Working Group on Arbitrary Detention, and the Special Rapporteurs on violence against women, Torture, Human Rights Defenders, Independence of Judges and Lawyers, Indigenous Peoples, and Health have all signed an urgent action request addressed to the Government of Mexico […]

They've analyzed the information presented and agree that her fundamental rights are at serious risk: among them life, health, indigenous culture, and due process.

“If They Want to Destroy Me, They're Not Going to Succeed”

The most recent display of support came from the United Nations’ Working Group on Arbitrary Detention, with their Resolution 56/2015 published in February of 2015. In this resolution, United Nations experts determined that Nestora's arrest was “illegal and arbitrary” and even asserted that it looks like she “was prosecuted because of her fight for indigenous rights” and expressed concerns “over what seems to be a pattern against human rights defenders” in the country, thus pointing out that the Mexican government must release her immediately.

Nestora, her relatives, and her community continue the fight and demand that their rights to self-organize as an indigenous people be respected. In Nestora's words, through the independent media site, Misinform Us:

If they want to destroy me, I want them to know that they're not going to succeed, because I know that I am innocent. Being innocent fills me with the strength and courage to claim that what you're doing to me is arbitrary, a cruelty. […] I'm not a criminal.