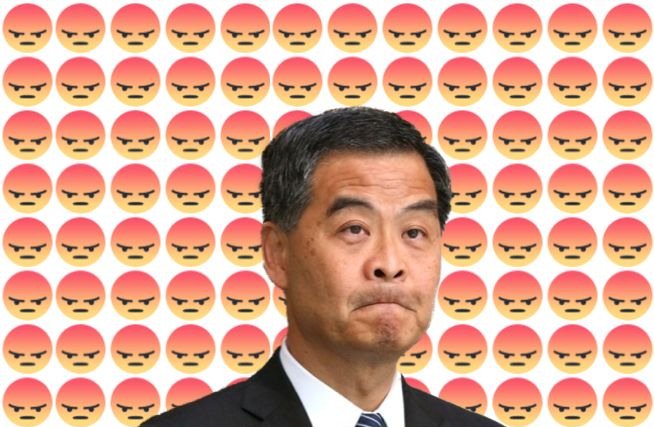 This post was written by Hermina Wong and originally published on Hong Kong Free Press on February 26, 2016. The version below is published on Global Voices under a partnership agreement.

Ever since the social network platform launched its new “Reactions” features on February 26, the head of Hong Kong's government, Chief Executive Leung Chun-ying, has amassed 54,000 “Angry 😡” emojis on Facebook within hours of publishing a post.

In addition to “Like”, Facebook's new reaction panel allows users to respond with “Love”, “Haha”, “Wow”, “Sad” and “Angry” emoji. Hongkongers immediately took full advantage of the tool to express their discontent.

Launched in October 2015, CY Leung's Facebook page's comment function was restricted to his friends and only positive comments would appear on the page — but now, his online “popularity” has been unveiled by the new emoji function.

At around 2:30pm on Friday, a set of photos of Leung attending a Lunar New Year banquet organized by Employers’ Federation of Hong Kong was uploaded to the Chief Executive's Facebook page.

As New York Times reporter Alan Wong noted on Twitter, when compared with the current Election Committee system, which only gives voting rights to 1,200 members, the emoji function is certainly more democratic:

CY Leung is breaking the internet with all the 😡 he's getting. pic.twitter.com/ePvcXYwa7C

Leung’s rumored rival in the next Chief Executive election in 2017, Finance Secretary John Tsang Chun-wah, had received no angry emojis at the time of writing.