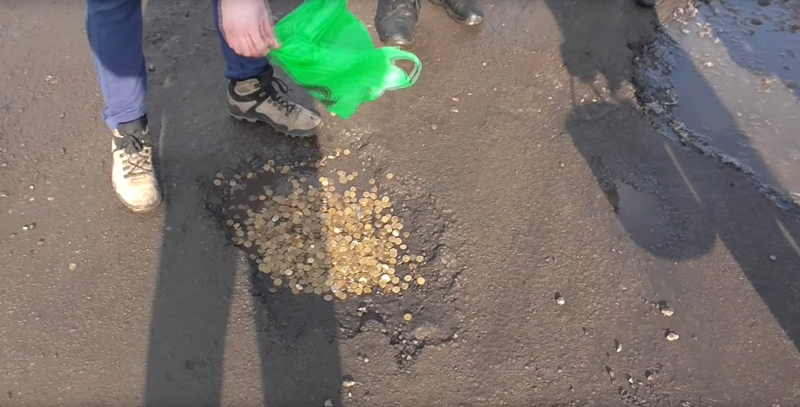 Across the world, potholes and generally rotten roads are fertile grounds for weeds, puddles, and unexpected protests. Last year, someone calling himself “Wanksy” went around spray painting gigantic penises around potholes in Greater Manchester. In March 2013, a Serbian newspaper invited its readers to “adopt a pothole and watch it grow.” Two years before that, some disgruntled citizens in Zimbabwe planted trees in potholes. These were all efforts (some more successful than others) to compel local authorities to patch the roads.

Russians, who are fond of saying “fools and bad roads” are their two greatest misfortunes, have their share of pothole politics, too.

In May 2015, an activist in the Russian city of Ryazan made world headlines by spray painting the mayor’s face around potholes. That stunt got even more publicity, when the city painted over the graffiti, before it ever repaired the potholes. (The repairs, moreover, were shoddy, and many of the potholes were back within a month.)

Priceless. The graffiti using potholes to lampoon the mayor of Ryazan has been painted over. Potholes: intact. pic.twitter.com/9l2WaLeFJr

In the past five weeks, Russia has witnessed a new slew of pothole-related scandals. Depending on your attitude about lousy public services and unsafe motorways, these stories will either entertain or disconcert.

In the city of Lipetsk (about 300 miles south of Moscow), locals have recorded two instances of particularly incompetent road work. The first incident occurred on January 20, when a man named Denis Popov filmed a crew pouring asphalt into potholes on a city street still covered in snow. The repairs were being made, despite the fact that the road—to say nothing of any pothole—was scarcely visible. Popov offers colorful commentary from behind the camera, joking that the strange repairs must be using some new form of “nanotechnology.” On YouTube, the video has attracted more than 50,000 views.

Round two—also in Lipetsk—came just 11 days later, when another local man filmed road repairs that were even more brainless. In the video, a worker shovels dirty snow and loose gravel into an open pothole, patting it down with his shovel. “Oh! The latest technology, part two!” the man behind the camera jokes, apparently referring to Popov’s “nanotech” footage from earlier in the month.

In late February, about 90 miles farther south, the residents of a small town outside Voronezh decided to draw attention to their pothole problem, transforming some of their roads’ worst traffic hazards into flowerbeds. In one pothole, they also poured a bag of coins, before burying them under globs of cement. “This is our money. This is how we’re going to bury our money,” the large group of men say in a video addressed to President Putin, asking for help. In that video, when the men are done planting flowers and burying their kopecks, they go to work on the road with cans of spray paint, sketching cartoon flowers all around the potholes.

Wanksy and his supporters will be disappointed to learn that not a single phallus was drawn.