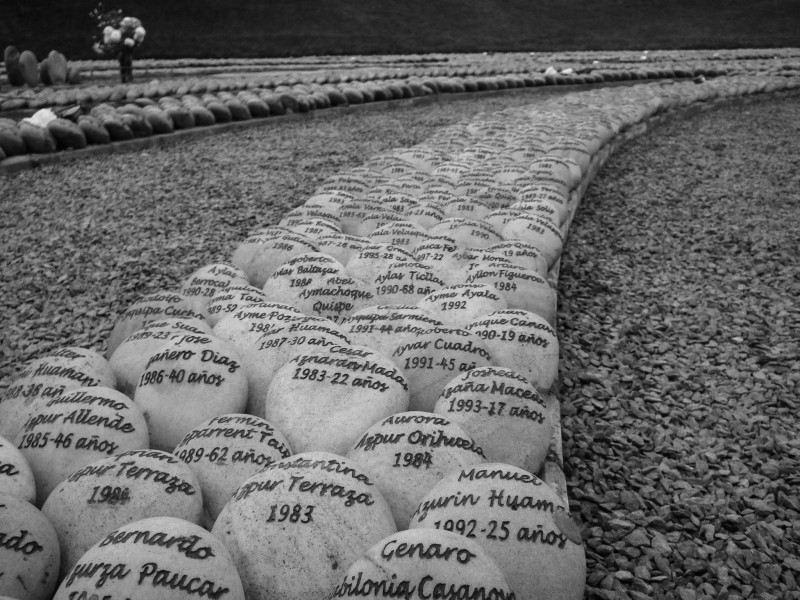 El ojo que llora, a memorial for victims of the violence in Peru 1980-2000. Each rock represents a murdered or disappeared person. Most of the victims were quechua-speaking peasants from the highlands. PHOTO: Christiane Wilke (CC BY-NC-ND 2.0)

I am absolutely certain that if you were to ask most Peruvians today about the things they believe make Peru most famous, most of them would cite Peruvian food, Machu Picchu and a few other things along those lines. But if you’d asked the question 30 years ago, the answers would have been very different. I’m certain most people would have said terrorism and drug trafficking.

Over the last 30 years, Peru has somehow managed to create points of agreement and national identity around certain cohesive elements that unify Peruvians of diverse backgrounds who otherwise have only nationality in common. The tattered, barely viable failed state of almost three decades ago has today been able to convert even its failures into successes. Alongside these elements, however, the country’s outright rejection of terrorism and terrorists remains, and is virtually unanimous.

“…Peru has somehow managed to create points of agreement and national identity around certain cohesive elements that unify Peruvians of diverse backgrounds who otherwise have only nationality in common.”

A recent example of this sentiment is the Peruvian response, last December, to the release from prison and subsequent deportation from Peru of US citizen Lori Berenson. A Peru-based English-language web site, Living in Peru, published a story about Berenson, referring to her in the headline as an “activist”. The online outrage was immediate, so much so that the website was forced to remove the word “activist” from the headline, explaining that it was used because multiple foreign sources in English had referred to Berenson that way.

But the issue did not end there. Mijael Garrido Lecca, director of the Peruvian online daily Diario Altavoz, published an open letter to the Associated Press news agency, the source of the Living in Peru story. Here’s an excerpt from that letter:

“[Frank] Bajak [author of the story] says Berenson was convicted for “collaborating with terrorism”. . . . The deaths caused by the murderous ideology that Berenson proclaimed are not an euphemism; nor are the widows and orphans [they created]. How is it that Berenson fits into the category of activist if she was part of an organization that murdered in cold blood and kidnapped at its own discretion?”

“Osama Bin Laden,” Garrido continues, “was not an ‘activist’, he was a terrorist. The infamous attacks on the World Trade Center on 11 September 2001 were not an act of activism of any kind. They were a vile terrorist act that implicated innocent citizens in decisions that weren’t there own. . . . What just happened in Paris was not an act of activism. It was terror. But these semantic ‘errors’ offer terrorists future shelter, allowing them to revise history and present a biased and cowardly narrative.”

I understand that the term “terrorism” has been abused in recent years, and devalued by the opportunistic application of the term to certain groups of people and not to others. Here in Peru, however, in spite of some disagreement when the term is used by the media and others in contexts such as “environmentalist terrorism” and “anti-mining terrorism”, there's almost unanimous agreement that the activities of Shining Path and the MRTA constituted terrorism. So when someone uses a euphemism, as Bajak did, to describe a person widely considered a terrorist by Peruvians, social media—indeed all media—explode with rage and anger.

“…in Peru…there's almost unanimous agreement that the activities of Shining Path and the MRTA constituted terrorism.”

Maybe at this point a bit of history will help readers better understand the context. Shining Path was formed in the Andean city of Ayacucho during the 1970s. The group’s first notable act was the burning of ballots and ballot boxes in the village of Chuschi on May 17, 1980. 12 years, countless terrorist attacks, and nearly 60,000 dead later, the capture of Abimael Guzman, leader of the group, on September 12, 1992 marked Shining Path’s end.

When Shining Path committed that first act in Chuschi, it did so not in response to any public demand or protest, but with a blind violence that disrupted an electoral process that citizens had demanded and awaited with great anticipation. Then they announced that they were at war with the bourgeois state, proclaiming themselves to be of Marxist-Leninist-Maoist orientation and subscribers to Mao’s thesis that violence was a necessary part of revolution. Shining Path’s general program of 1988 stated that the group sought “demolition of the Peruvian state, the dictatorship of the exploiters led by the haute bourgeoisie, the repressive armed forces that support it, and all of its bureaucratic apparatus.”

One of Shining Path’s main features was its refusal to engage in dialogue: according to its ideology, any non-violent contact with the enemy was an unacceptable concession. So there was never any possibility of dialogue, far less of negotiation, and if any Shining Path member showed an inclination towards those things, he/she was forced to undergo “self-criticism” sessions.

This, plus the use of obscure, deeply ideological language incomprehensible to ordinary citizens did little to facilitate public understanding of the Shining Path’s objectives. That included the Lima intelligentsia, who for years failed in their analysis and diagnosis of the Shining Path phenomenon, and even showed an initial sympathy for the groups’s leftist features.

But the mass of the Peruvian people rejected Shining Path’s ideology and methods, and did not hesitate to label their members “terrucos”, a Quechua modification of the Spanish word for “terrorists” that was often abbreivated to “tucos”. The association between the group and the concept of terrorism emerged first in the poorest sectors of the urban and rural population, in the areas most affected by their attacks. Then the use of these words spread to all sectors of Peruvian society.

As a result, any attempt to describe Shining Path's activities as anything but terrorism results in a barrage of accusations from all sectors of Peruvian society. Thus, some political actors demanded that the government take action to demand that the US label Berenson a terrorist and not an activist. When asked his opinion, Peru’s justice minister said that the activity of MRTA, the organization to which Berenson belonged, was clearly terrorist in nature. Even the US Ambassador told reporters that “the US government has always said that the MRTA is a terrorist group.”

Berenson, however, who while at airport awaiting departure from the country was heckled with shouts of “terruca” by some of those present, maintained her position that the MRTA was not a terrorist organization. Some positions will never be reconciled.

The only other matter that reliably inflames the passions of Peruvians across the board is gastronomical: namely, the attempts by our southern neighbors (Chile) to claim the Pisco Sour or the Suspiro Limeño as their own. Oddly, or maybe not so oddly, it's the media who blow these issues out of proportion, with little regard for how small or unimportant they might be. To them, it seems very important to expose, for the Peruvian public, the dangerous moves being made by the Chileans, or the imminent threat posed by those who fail to call terrorists by their correct designation.

“Gastronomical disagreements don't stop us from doing business with Chileans or from share a meal among friends who have different viewpoints on Papa a la Huancaína. But the terrorism issue involves social and political factors whose memory takes us  back to a time of when Peruvians were divided, and which are therefore ripe for political manipulation.”

With the departure of Lori Berenson things in Peru returned to normal. But maybe this calm is the same as prevails between battles over national dishes: it's only a matter of time before the media begin to feel restless and hungry for the stirring up of a new episode of false patriotism.

Nevertheless there is a great difference between becoming outraged when a Chilean web site says that Picarones are a Chilean creation, or arguing whether Papa a la Huancaína can be made with anything but yellow potatoes (it can, but there are purists who would see any departure from this norm as an aberration) and the kind of disagreement that the terrorist issue creates. Gastronomical disagreements don't stop us from doing business with Chileans or from share a meal among friends who have different viewpoints on Papa a la Huancaína. But the terrorism issue involves social and political factors whose memory takes us  back to a time of when Peruvians were divided, and which are therefore ripe for political manipulation.

So I’ll stop here and focus on other more constructive issues, such as establishing which is the best ceviche in Peru, or if lomo saltado is more Chinese than Creole—discussions that never end, but which also bring people together and are decidedly more pleasant.