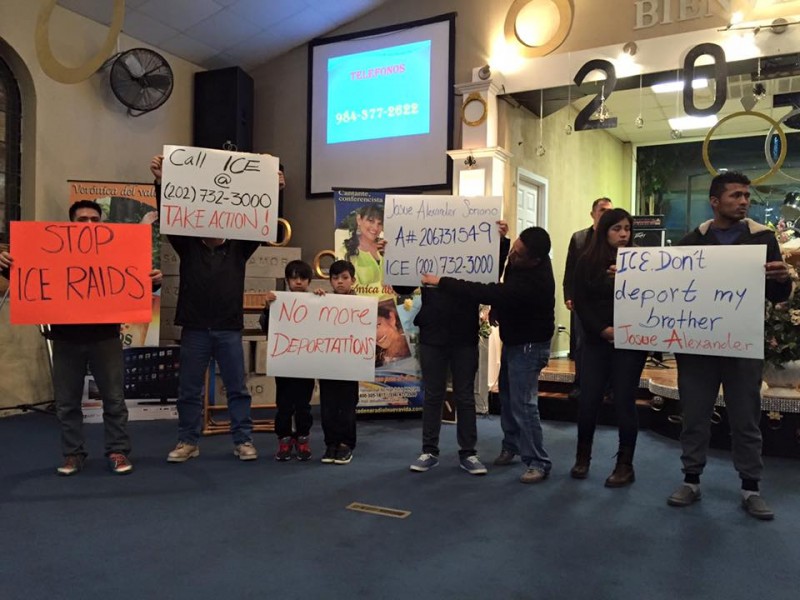 Families plead for release of their loved ones. Photo credit: Alerta Migratoria NC. Used with permission.

Despite entreaties by teachers, parents, activists and even the mayor of North Carolina's largest city, the US. Department of Homeland Security (DHS) and its policing arm, the Immigration and Customs Enforcement (ICE), have not yet backed down from arresting immigrant high school students on their way to school.

The high schoolers were part of the wave of Central American children who applied for asylum at the US-Mexican border in 2014, and have increasingly faced arrest by federal authorities in the US. With gang violence and crime rates soaring in El Salvador, Honduras and Guatemala, many young people fled those countries, including a large number of unaccompanied minors, and sought refuge in the United States. Seven teens who managed to rejoin their families in North Carolina had their hopes dashed when their asylum claims were rejected.

Jennifer Roberts, mayor of Charlotte (NC), says she called the White House and met with DHS and ICE officials on February 17 to ask that they refrain from arresting students at bus stops, or at least delay such actions until the end of the school year.

DHS denied disturbing students and repeated their position against those who lack documents. They referred to their January 4 memorandum targetting the Central American families and unaccompanied minors for deportation.

A week and another student apprehension later, the organization Alerta Migratoria NC (Immigration Alert NC) issued an ultimatum, demanding the immediate release of seven North Carolina teenagers from immigration detention centers and admonishing DHS for not following its own directive to “not expend detention resources” on immigrants who pose no public risk. Alerta promises to step up protests if the seven are not freed by Friday, February 26. 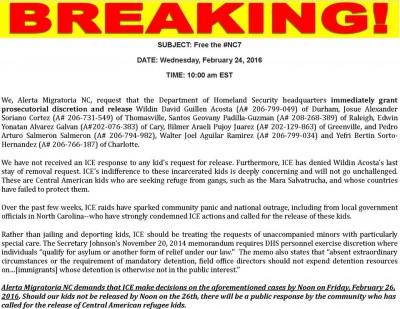 Statement released by Alerta Migratoria NC demanding that the #NC7 be freed.

None of the seven students has a police record, all are attending school and living with family members, and all claim to run substantial risk of personal injury if they are returned to their home countries.

Speaking in Spanish to local news outlet Qué Pasa, Mayor Roberts had this to say:

Children who are doing the right things, who are in school, who are living at home with their parents, are not a priority in my opinion.

It was clear to me from the meeting that ICE agents are waiting for the kids from Central America who arrived as teenagers in 2014 to turn 18 before arresting them, with the excuse that now they are adults.

Spanish language television station Univisión was allowed to enter Stewart Detention Center in Lumpkin, Georgia, where two of the seven teens arrested are being held. Yefry (pronounced Jeffrey) and Pedro, both slight of build and sporting long ponytails, could not hold back the tears as they met with the reporter. Pedro detailed how he has lost 20 pounds and is suffering from spinal pain. When asked if he had been treated, Pedro replied that he had been seen but not given any prescription.

Yefry reiterated how the gangs in his country had threatened him and his family with bodily harm if he did not do as they say.

They said that if I did not agree, they were going to hurt my family, and hurt me.

San Salvador, the capital of El Salvador, in Central America, has become the city with the world's highest homicide rate. And Stewart Detention Center, owned by for-profit Corrections Corporation of America, has been the subject of years of protests for abusive treatment of detainees.