Journalists Find Themselves the Target of India's ‘Anti-National’ Narrative 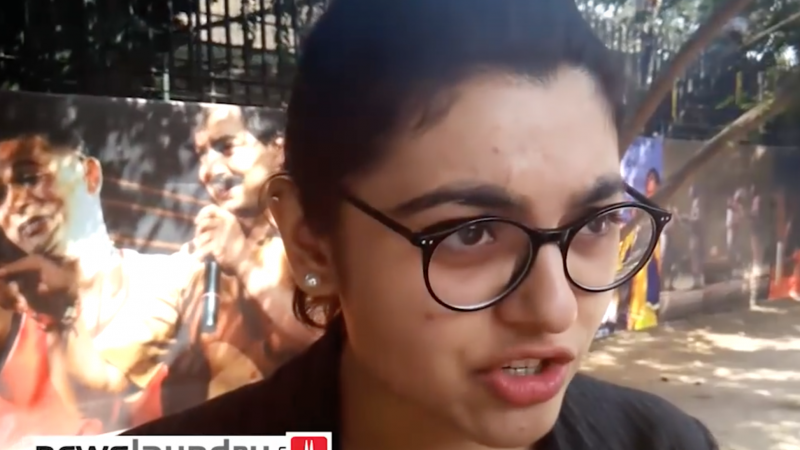 Journalist Sonal Mehrortra, who was threatened with, “We will take your phone and break your bone”, talks about the incident to Newslaundry. Click on the image to watch the video.

A student leader's controversial arrest on sedition charges in India has been making headlines since mid-February. The case touches on many elements, including the right to protest, the right to free expression and the existence of a growing nationalist movement in the country, all of which journalists have been dissecting in their coverage.

Now, the press has found itself in the headlines after several reporters were attacked while following up on the case, accused of being “anti-national”, “terrorists” and “traitors”. Meanwhile, while some have argued that the focus on the violence against members of the media has distracted from the more important issues at hand.

On February 15, a mob, both dressed as lawyers and including real lawyers, threatened, thrashed and chased out reporters at the Patiala House court complex in the Indian capital of New Delhi, where a hearing in the case against Kanhaiya Kumar, president of student party Jawaharlal Nehru University (JNU) Student Union, was set to take place.

Kumar, who is charged with sedition, was detained due to his role in organizing a rally to mark the third anniversary of the execution of Kashmiri separatist Afzal Guru in which anti-Indian slogan were allegedly chanted. His arrest has been both condemned and supported by many across the country, while students and teachers at the university have largely opposed authorities’ actions. Protests against his arrest have sprung up across the country. A former lecturer was also arrested on sedition charges.

Sonal Mehrotra, a reporter from Indian television news channel NDTV, witnessed a fellow journalist being beaten and said that journalists and professors of the university were threatened: “We don't require you here, leave or you will be harmed”. Another journalist also had reported female media workers being abused with vulgar and offensive curse words.

While all this was happening, police didn't intervene.

Later that same week, another journalist was beat up by a group dressed as lawyers before a different hearing in the case.

‘I am both angry and anguished’

Rohit Gandhi, a former CNN and CBC correspondent and producer, denounced the attacks and demanded the arrest of the alleged lawyers:

If democracy is alive in India, the lawyers who attacked journalist and the accused in court will be arrested and tried #JNU

But elsewhere, some framed the violence against the journalists as just action against “anti-Indian” coverage:

I am not a Nationalist but I will beat every journalist/supporters/Uncle with ‘Chappals’ who support JNU rascals against India and its HM.

Just going too far with antinationals.Are these people deserve to be called journalist? #JNU #IndiaAgainstDeshdrohis https://t.co/1pCeomxpXe

While some high-profile journalists have spoken out against Kumar's arrest, part of the nationalism debate happening seems to conflate any and all media coverage of the case with expressing support for Kumar. Members of right-wing political party Bharatiya Janata Party (BJP), led by the Prime Minister Narendra Modi, certainly haven't minced words in their damnation of JNU students. Rajnath Singh, minister of home affairs, tweeted (CP stands for commissioner of police):

Whatever has happened in JNU is extremely unfortunate. I have instructed Delhi CP to take strong action against the anti-India elements

While one of BJP's member of legislative assembly, Gyandev Ahuja, alleged publicly that every day, 50,000 pieces of bones, 3,000 used condoms, 500 used abortion injections, and 10,000 cigarette butts are collected from the JNU campus, where the students dance naked in the cultural celebrations.

Noted journalist Barkha Dutt wrote an open letter titled “A Letter To PM Modi From ‘Anti-National Sickular Presstitute’ Barkha Dutt” to India's Prime Minister Narendra Modi pleading that he and his party do something about the dangerous black-and-white understanding of nationalism growing in India:

I write to you today because like so many of my fellow citizens, I am both angry and anguished. I am aware that a missive from someone like me – “presstitute”, “bazaaru“,  “sickular” and worst of all, “anti-national”- will be most likely junked by your office as not worthy of your time. […] It is entirely possible to deeply respect the military and feel ashamed of the multiple manipulations, doctored videos, police excesses, government heavy-handedness, brazen hooliganism and ominous environment of intimidation that the crackdown on JNU has revealed. […] As goons in black robes rampaged through the Delhi court house where Kanhaiya Kumar is being tried, they assaulted journalists not just on day one, but then once again, a little over 24 hours later, emboldened by the knowledge that no cop was going to come after them and in open contempt of a Supreme Court directive. Euphoric from the taste of blood, they congratulated each other on social media for being the “shers” [meaning “lion”] who did “what the government and military could not do”. […]

One government fan replied back to Dutt's letter, saying:

The jingoistic act by few lawyers also need to be condemned. But this shouldn’t become an excuse to divert the actual issue. […]

All these non-sense debates about free speech are possible in India today because India is protected from anti-India forces. The moment India loses its sovereignty, it will also lose this basic freedom. This is why free speech always comes with some reasonable restrictions.

During the melee against journalists and JNU teachers and students, a member of the legislative assembly, O P Sharma, was caught on camera assaulting an unknown man, saying, “If you ask me, there is nothing wrong in beating up or even killing someone shouting slogans in favour of Pakistan”. Due to the historic bad blood between India and Pakistan, an accusation of support for Pakistan is shorthand for treason against India.

The Indian Express, a national newspaper, and Legally Indian, an Indian law portal, reported how a WhatsApp message was circulated beforehand to “teach the anti-nationals a lesson”:

The media aren't taking the violence lying down. About 800 journalists presented a petition to the Supreme Court of India demanding for more protection of the so-called fourth pillar of Indian democracy, as well as for justice for those affected. The court also was to hear a plea whether the police has acted as a “mute spectators to the brazen display of brute force”.

Neither are reporters blind to the mistakes their own institutions have made. A journalist with television channel Zee News quit from his job, leaving a letter blasting what he considered unfair coverage:

[…] I am resigning to register my protest at the role played by Zee News in instigating and spreading the campaign of blind nationalism under the pretext of publicising Kanhaiya’s excess. […] It seems as though we are the mouthpiece of the government or its hatchet men. Modi is the prime minister of the country, he is my prime minister too; but as a journalist I can only digest so much of Modi worship. […]

Sagarika Ghose, consulting editor of the Times of India, argued that fair coverage doesn't mean adopting the “view from nowhere”, or the practice of giving equal treatment to both sides of an issue. If one side is clearly committing misdeeds, the journalist should report them as they are:

[…] Is a journalist supposed to be neutral in a riot? […] There’s no neutrality here. Yes, the journalist is always anti-government whichever political outfit that may be. […] If a student incites violence, the journalist must say so; if they don’t, the journalist cant get carried away by “national sentiment” In the JNU case if the journalist has to stay true to what she sees hears and analyses, she cannot take the side of the government or the police. […]

Support or opposition to the student protests aside, a large majority of Indians agree that violence against the press is not a legitimate way to express one's discontent. When violence against mediapersons is seen as the press freedom being choked, ironically, the fourth pillar of the world's largest democracy is being crushed in the presence of the third one i.e. judiciary.