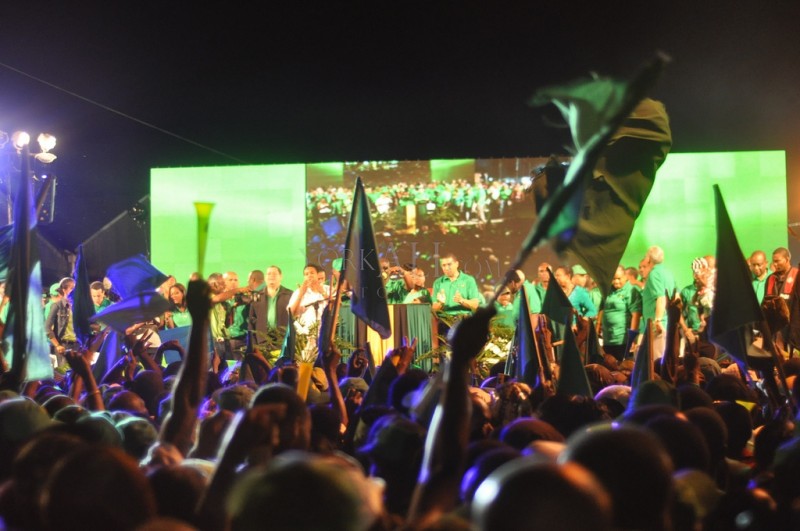 It was a long day, and a relatively long election night, but the opposition Jamaica Labour Party (JLP) was finally declared the winner of Jamaica's 2016 general elections with a three-seat advantage over the People's National Party (PNP), which had governed the island for the past five years.

As the final count begins, preliminary results show a win of 33 (JLP) to 30 (PNP)seats. As predicted, the race was tight and there were also some surprises, keeping Jamaicans glued to their radios, televisions — and their smartphones.

Online activists were quick to give credit to the so-called #ArticulateMinority (a term coined by PNP Chairman Robert Pickersgill) for the election results.

Despite one or two problems earlier in the day, voting was generally peaceful, although quite slow in some areas (sparking the hashtag #stayinline). Television reporter Dwayne Anderson quipped:

St Andrew Western things slower than molasses going up a hill on a cold day. margin of 5000 in 2011, no one is rushing. Incumbent A Hylton

Voter turnout, as expected, was low; but public opinion polls, which gave the People’s National Party the edge, fell a little short. However, a privately commissioned poll conducted by Trinidadian Derek Ramsamooj proved more accurate. Some have attributed the record low turnout of eligible voters (47.5%) to disaffected PNP supporters who decided not to vote. However, the downturn is also part of a declining voter trend over the past three elections.

Social media activists and commentators were extremely active on Twitter throughout the evening. When the results emerged, Nationwide News Network‘s Cliff Hughes was the first to “declare” the results, just before 9 pm:

The JLP will form the next government. The PNP has lost the elections. I am declaring it now!

We have entered the era of the one term governments. If you don't perform, you will get kicked out.

Online activists were also happy to advertise their participation in the democratic process. Many tweeted photos after voting, with purple, ink-stained fingers:

Many urged fellow Jamaicans to vote:

@Petchary did it… Everyone should go out and vote!!! pic.twitter.com/vuHebimdQA

One new voter (among close to 35,000 voters joining the electoral list for the first time last November) tweeted proudly:

Changes needed in the political process

The elections provoked some political commentary, with many arguing that a change in Jamaica's political system was needed. Popular young reggae singer Protoje tweeted:

The morning after the polls, some online commentators were also seeking to analyze the factors behind the PNP's loss. Political analyst and academic Hume Johnson, among others, suggested that the PNP had become too complacent and were punished for it at the polls:

The chickens are coming home to roost. The arrogance of the #PNP may be their downfall tonight. #JaVotes2016

Another tweeter noted that the former government's refusal to tackle issues publicly had come back to haunt them:

PNP, this is what happens when you take things for granted. I'm telling you man, the debate decision was a BAD move.

The PNP’s refusal to debate was a poor strategic move […] After being predominantly silent on topical issues over the last several years, the Jamaican people were anticipating to hear what their Prime Minister Portia Simpson Miller had to say; and more importantly how she would square off against a more learnt Andrew Holness. But it would appear to many that the PNP believed facing the people in this way was not a necessity for them to win the race, while not realizing that the people did in fact hold the staging of a debates in high regard. At this point, I think the people started to question the integrity of the PNP, and how far they fall on the party’s list of priorities; a party that is suppose[d] to be for the people.

While the PNP had a much higher profile in the traditional media during the campaign, a young professional commented, in reference to the highly enjoyable and much praised PNP rally in Half Way Tree, Kingston:

PNP got cool points for the dj in hwt, but it wasn't enough #JaVotes2016.

Meanwhile, there is a sense of relief among many Jamaicans that the long campaign (which unofficially began well before Christmas) is now over, and that the nation can get back to work. One Twitter user observed:

Most of all, I'm happy that it was a rather violence free election day. This is what I really want too.

Despite all the ups and downs of Jamaica's “silly season”, there was no doubt that the JLP made better use of social media during its election campaign, especially targeting the youth vote. Prime Minister-elect Andrew Holness had the last word, calling on Jamaicans to keep exercising their civic voice via new media:

To all my followers. I firmly believe we were able to change the national conversation via social media. Be proud. But don't be complacent!