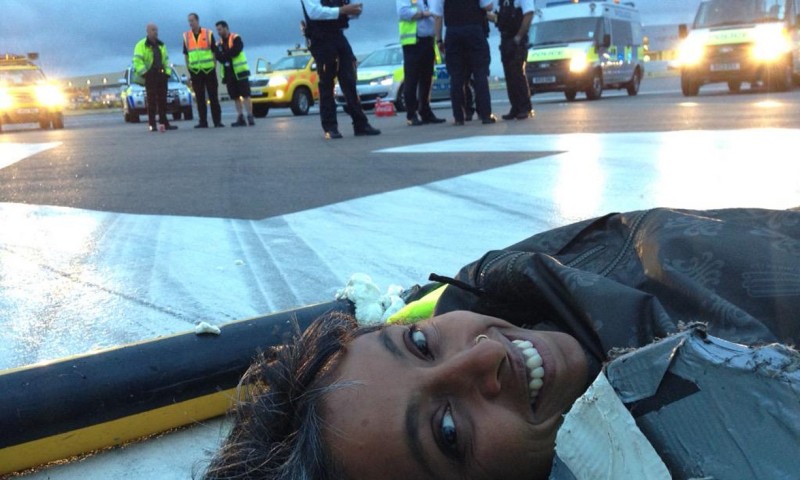 This article is based on a piece written by Melanie Mattauch for 350.org, an organisation building a global climate movement, and is republished on Global Voices as part of a content-sharing agreement.

On 24 February, 13 individuals who blockaded a runway to protest against expanding Heathrow Airport in London were expected to be sent to prison, but ended up receiving six-week suspended sentences instead. They had packed suitcases and set up their ‘out of office’ email messages anticipating to become the first climate activists in the UK to receive a prison sentence.

In the case of the so-called Heathrow 13, this is what happened: In July last year, a commission tasked by the UK government recommended expanding Heathrow. Two weeks later, 13 people from the direct action network Plane Stupid peacefully blockaded a runway at Heathrow in protest of the expanding aviation industry due to its contributions to air pollution and climate change. Their occupation lasted six hours and delayed or cancelled dozens of flights.

The group included a 68-year-old atmospheric physicist and 350.org UK Divestment campaigner Danielle Paffard. In court they argued that they feel a moral responsibility to take action as ordinary citizens where democratic, legislative and political processes fail to address the threat the aviation industry poses to the climate and people’s health.

When the political system is so fundamentally flawed that it is unresponsive to an issue of colossal international importance, such as climate change, then every citizen has a responsibility to act. There is a basic human, moral and social duty to take action to prevent this disaster and to wake people up.

Aviation currently accounts for about 2-5% of global emissions, but the industry’s rapid expansion could see that number jump to 22% by 2050, according to a recent study by the European Parliament. It is one of the fastest growing sources of emissions, yet aviation remains largely exempt from emission reduction requirements and enjoys tax breaks that keep air travel costs artificially low.

A paragraph on emissions from aviation and shipping in a draft version of the agreement reached at the UN climate summit in Paris in December 2015 was taken out of the final text, and new rules by the UN’s International Civil Aviation Organization are much too weak to have a meaningful impact. Besides fueling climate change, the emissions from a third runway at Heathrow could cause 150 premature deaths a year by 2030, according to an MIT estimate.

Even though the judge recognised that the Heathrow 13 were “principled and passionate people” and that Heathrow is in breach of European Union emission regulations, she found them guilty of “aggravated trespass” and warned them to expect immediate jail sentences when they return to court.

Aggravated trespass is a criminal offence that was introduced under the Margaret Thatcher government (1979-1990) with the aim of curbing protests. In 2013, a UN independent expert recommended that the UK review its public order legislation, in particular with “great concern about the use of aggravated trespass against people staging legitimate protests”. A criminal law specialist described the possibility of a custodial sentence as “extremely surprising”. Ten of the Heathrow 13 had no prior convictions. 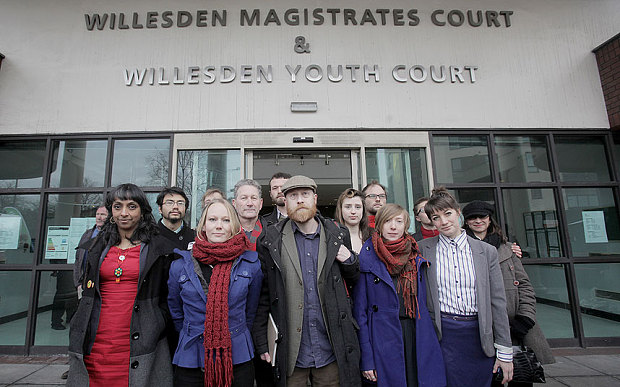 There is another anti-aviation fight in Europe that is gaining steam. In France, a 40-year battle against plans for Europe’s biggest airport in Notre-Dame-des-Landes (NDDL), about 25 kilometers from Nantes, is heating up in the aftermath of the Paris agreement. A petition arguing that the airport is not compatible with the Paris climate agreement and urging the French government to intervene gathered over 11,000 signatures in just 24 hours.

The battle against the airport at Notre-Dame-des-Landes has grown into arguably the most iconic fight of the French climate and social justice movement. Many see the airport project as representing a system of unnecessary expansion that serves the economic interests of a minority at the expense of local communities, farmers’ livelihoods, the environment and the climate.

Hundreds of people have occupied the site for years. Recently, 11 farmer families announced that they will resist an eviction order and are prepared to risk imprisonment. Twenty-thousand people blockaded the ring road around Nantes in January in a protest against the project. Another mass mobilisation is scheduled for 27 February.