Why Are People Calling John Kerry a “Thug” Online? 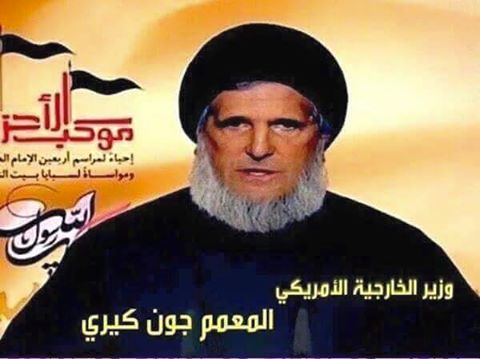 US Secretary of State John Kerry has come under fire online after stating that the US and its partners are not “seeking so-called regime change” in Syria.

Al Shabeeh Kerry, or #KerryTheThug, preceded the Geneva III conference which kicked off on January 29, which was expected to renew peace talks between the Syrian regime and different opposition groups. The hashtag was launched hours before the conference and called out Kerry for statements he had made earlier in December, when he stated “The United States and our partners are not seeking so-called regime change”. Analysts considered the statement a possible shift from previous positions of the US administration, which called for Syrian President Bashar Al Assad to leave. In fact, US President Barack Obama himself has made contradictory statements at the end of the year press conference, a few days after Kerry’s statements, where he said:

I think that Assad is going to have to leave in order for the country to stop the bloodletting and for all the parties involved to be able to move forward in a non-sectarian way.

Contradictions? Intentional ambiguity, or simply politics? It is not clear whether the US administration has changed its official position or if it is simply maneuvering amid what have proven to be complex and multilateral negotiations. For many netizens, it seems obvious the US administration finds it easier to pressure the opposition rather than the Assad regime, which is backed both by Russia and Iran.

Syrian and Arab Twitter users expressed skepticism with memes and hashtags like #KerryTheThug comparing Kerry to thugs and loyalists of the Syrian regime, known in Syrian slang as Shabeeha. Others Photoshopped Kerry as Hassan Nasrallah, leader of the Lebanese militant group Hezbollah, which has troops on the ground in Syria supporting the operations of the Syrian Army. 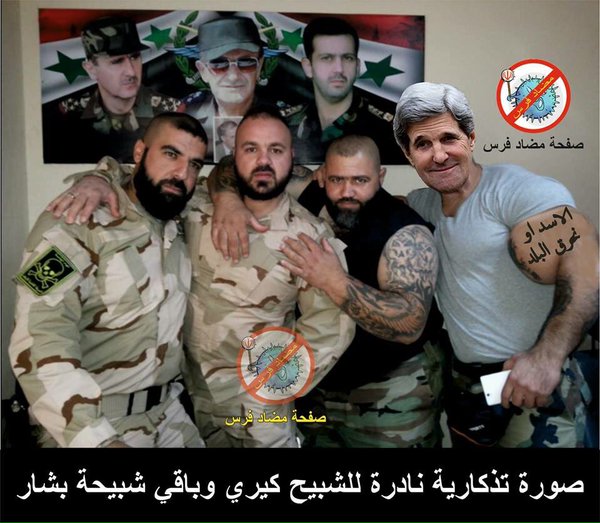 #Kerry_The_Thug
Meme reads: a rare memorable picture of the thug Kerry with the rest of Bashar's (president Bashar Assad) thugs.
On John Kerry's arm: Al Assad or we burn the country.

And Mahmood from Syria shares this photograph of Al Assad, being honoured as Obama's hero: 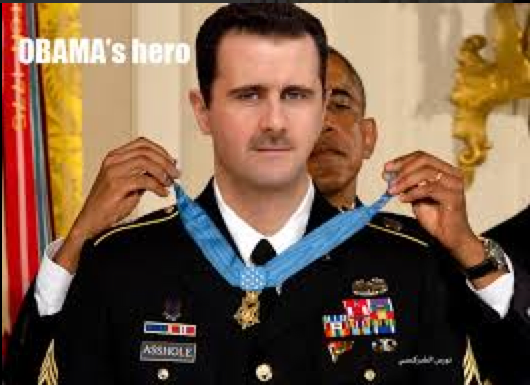 A few days before the conference, news reports claimed Kerry has also pressured the opposition to join negotiations without preconditions.The Opposition under the Higher Negotiation Committee, which includes some of the political and military forces, had initially made it clear they will come to negotiations if all parties agree to a ceasefire. Other preconditions that were put forward included the allowing of aid into besieged areas.

Kerry threatened to cut off aid from the armed resistance if they do not succumb to his unfair conditions .. this is what a thug is #Kerry_The_Thug

We used to hear Assad's thugs yell at political prisoners “you want freedom?” Now it feels like all the world's thug-leaders are yelling in our faces do you want freedom? #Kerry_The_Thug #Hama_We_Will_Not_Forget

Other hashtags people used were #UNAssadAlly or the United Nations is Assad ally, to criticize the UN’s lack of response in the face of the horrific humanitarian situation in Syria. The organization’s inability to play a more proactive role in the political process or to hold the involved parties accountable sparked criticism online and on the ground by Syrian civil society activists who equated the UN’s role with effectively helping the Assad regime. The UN Special Envoy for Syria, Staffan de Mistura, declared the negotiations will be suspended until a later date this month. Opposition forces have criticized the UN’s inability to play an independent and proactive role to at least halt the bombardment in implementation of its own resolution 2254, which calls for all parties to cease attacks on civilians.

This Twitter user shares this cartoon to drive home his point:

The UN: we don't see the presence of militias in #Syria or civil war there #UnAssadAlly

@q7atah wonders what the world is waiting for:

Syria has been destroyed, her people have been killed and displaced, her women, children and elderly have been starved. So what are you waiting for? #UnAssadAlly

The announcement by De Mistura to suspend #Geneva3 was made to precede the High Commission's Delegation pull out from the negotiations following the latest developments in Aleppo. The cowardliness of De Mistura and the United Nations has no limits

They say The #US has blamed #Russia for postponement of #Geneva3 due to the military escalation on the ground. Question: when were things quiet on the ground in #Syrian in the past five years?

#Geneva_Oath #De_Mistura #Geneva3
Meme reads: I swear to God Almighty to remain loyal to Al Assad regime, to sustain the Russian and Iranian interests in Syria and guarantee the continuation of Al Assad and pillars of his regime and to also fight for the fulfillment of Geneva conference's objectives in dispersing the Syrian opposition and destroying the hopes of the Syrian people in freedom, and salvation from the regime.

More translated tweets by Meedan can be found here.