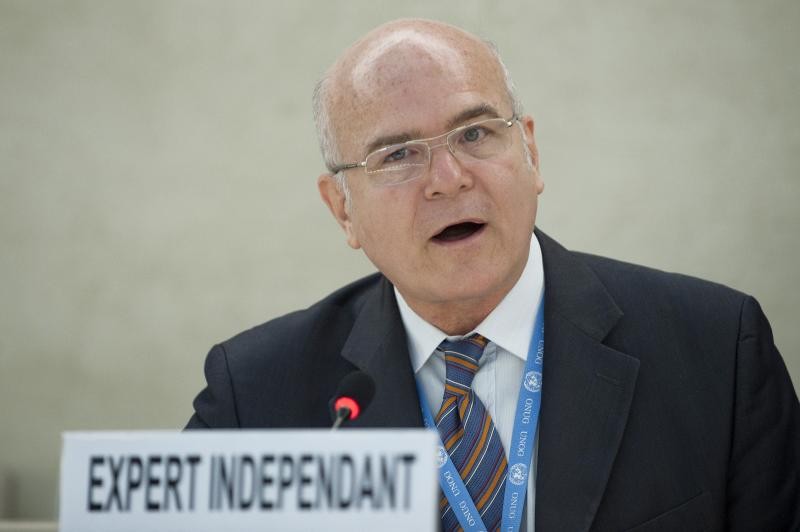 The man at the United Nations charged with monitoring the protection of basic human rights throughout the world has expressed harsh criticism for the Hungarian government.

UN Special Rapporteur Michel Forst arrived in Hungary in early February for a nine-day visit at the invitation of the Hungarian government. After meeting with representatives of the government and the judiciary, Hungary's ombudsman, and other state officials, Forst spoke with academics, NGO workers, and various human rights activists in Budapest, also visiting other major cities throughout the country.

At the end of his visit, Forst issued a preliminary statement condemning the intimidation and stigmatization suffered by Hungary's human rights activists. He called on the government to mainstream human rights into its institutional and policy framework, and to draw up policies in order to ensure the ability of human rights activists to operate in an institutionally supported, conducive environment. The UN official also advised Hungarian lawmakers not to criminalize the peaceful and legitimate activities of people working in the interests of human rights.

Forst praised the effectiveness of Hungarian organizations, while noting that “[human rights] defenders increasingly work in a rather polarized and politicized environment,” where they face serious challenges, which “appear to amount to violations of their fundamental rights and freedoms, and of their legitimate right to promote and defend human rights.”

Such challenges include the weakening of the constitutional framework and the rule of law, as well as the introduction of legislation that curbs the freedom of expression, freedom of information, freedom of association, freedom of assembly, and access to justice. Particular groups of human rights defenders face aggravated risks and are more exposed to stigmatization, such as women (especially those campaigning for sexual and reproductive rights), LGBTI, and Roma human rights defenders. Whistleblowers and those working on transparency and anti-corruption issues often face harassment and retaliation.

Hungarian organizations have reported funds dwindling or being discontinued after engaging in behavior deemed hostile to the government. “As the access to EU funding is channeled through [a] government-controlled agency, [this] is used as a tool to silence dissent or to encourage self-censorship.” Activists can also face societal difficulties and feel isolated in their work as “it appears that NGOs are not strongly embedded into society, and have not gained sufficient support from the broader society for their work.”

Speaking more broadly, Forst advised the government to pursue a number of structural and institutional improvements. He proposed strengthening of the Ombudsman office by ensuring the office's financial autonomy, while following-up and implementing the Ombudsman's existing recommendations. Judges, Forst argues, should be tenured to ensure independent functioning, and Hungary needs an independent national whistleblower agency to support and protect willing informants. Forst also called for revisions to Hungary's Act on the Freedom of Information, in order to improve access for human rights activists and journalists.

Forst had advice for civil society actors as well, telling them to deepen their national and local networks, and to utilize the UN's special procedures (and other international and European human rights mechanisms) when reporting crimes and violations.

Finally, the UN official urged the international community to empower and support Hungarian human rights activists, calling on the EU to “review its policy on funding civil society organizations exclusively only through the state budget and develop additional and alternative sources of funding ensure free and non-politicized access to funding for all civil society organisations.”

My preliminary observations on the situation of human rights defenders in #Hungary https://t.co/ScfGx3B5cq

The full text of Forst's report can be read here in English (with a downloadable Hungarian-language version available, too). Michel Forst will present his final report to the UN Human Rights Council in Geneva in March 2017.

Michel Forst seems to have pulled no punches in his assessment of #civicspace in #Hungary https://t.co/tqkRMeDoP4 @CIVICUSalliance