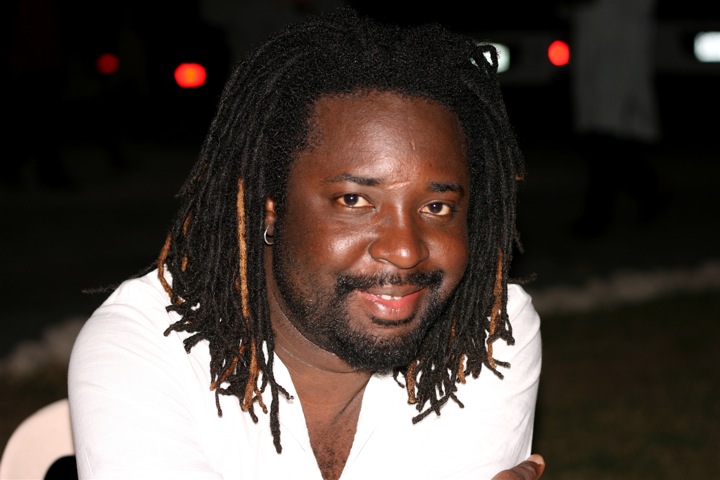 Jamaican novelist Marlon James at the Calabash Literary Festival in 2007. Photo by Georgia Popplewell, used under a CC BY-NC-ND 2.0 license.

The social network today removed an item James posted on February 24, on the grounds that it violated the social network's notoriously tetchy and selective Community Standards. The offending text, a comment on a Salon article about the police and media's “coddling” of the white, male perpetrator of February 20's Kalamazoo murder spree, went as follows:

This, all of this. White guys, I'll need you to reassure me that whenever I see any of your kind by himself in a public place (particularly a school) I shouldn't scream shooter. Yes, I need you as a group to constantly reassure us that the average caucasian isn't out to kill us. I mean, you expect every single Muslim to do it. Seems only fair. 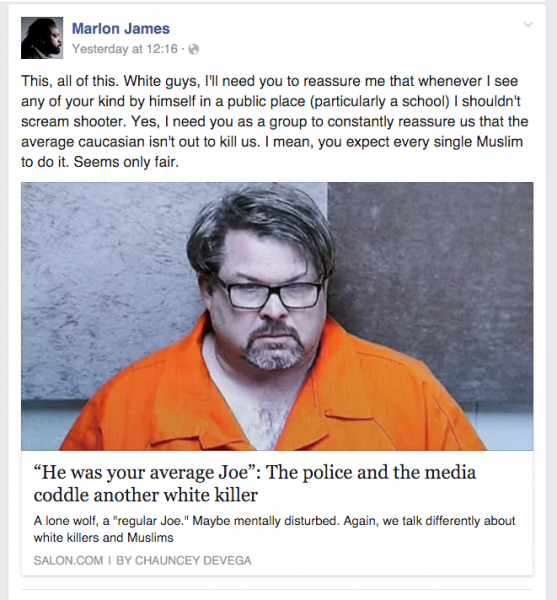 This post by Marlon James was removed by Facebook on February 25 on the grounds that it violated community standards. The post was reinstated the same day.

A little before noon US Eastern time, James reported on Facebook that the post had been removed:

So Facebook just removed my post because it didn't “follow Facebook Community Standards.” Mind you, people post to facebook all the time expecting Muslims to reassure them that they are not terrorists, but somehow me expecting an entire racial/ethnic group to assure me that they are not spree killers is racist. America, you crazy.

He followed up soon after with an item noting the selective nature of Facebook's takedowns:

So women report posts depicting shocking violence to women and those posts stay. People of colour report explicit racism from hate groups and those stay. Make a joke about white guys and it's gone in less than 24 hours. What are you trying to tell us, Facebook?

A Facebook post takedown is usually the result of another user's reporting it as having violated Facebook's “Community Standards“, a code of conduct created by the company. As Global Voices Advocacy director Ellery Biddle has noted, however, the term “community standards” “gives the impression that we all made them up together, or that they somehow naturally evolved from some shared agreement on what is right and good.”

While Facebook's Community Standards prohibit “direct threats” and “hate speech”, they do permit users to “…challenge ideas, institutions and practices.” Marlon James’ post seems—to me, at least—to fall into that category, though one might argue that James's table-turning use of the term “your kind” to refer to white guys is a seriously wicked piece of wordsmithery.

“Marlon James’ post seems—to me, at least—to fall into that category, though one might argue that James's table-turning use of the term “your kind” to refer to white guys is a seriously wicked piece of wordsmithery.”

The fact that an abuse report on a post like James’ could be taken seriously, however, points to a terribly broken system. A story released today about incidents at a Facebook building where “black lives matter” slogans have been repeatedly crossed out and replaced with “all lives matter”, also indicates that at least one person on the Facebook campus isn't happy with this latest assertion of black civil rights.

James is by no means the first victim of Facebook's highly arbitrary Community Standards regime, of course, and the harm he's suffered pales in comparison with that inflicted on others like Indian activist Preetha G.

As a well-known writer and a bit of a Facebook celebrity—James has 7,990 followers—it could also be argued that an incident like this provides him with further opportunity to showcase his way with words and to exercise his rapier wit. In recent times James has also had Facebook posts go viral, as did his screed about the service he received at Indian airports on his way to the Jaipur Literary Festival in January.

A little after 4pm US Eastern time James posted on Facebook page that he received a message from Facebook saying that “…the policy team determined that this content was not in violation of community standards. The content has been restored, and I apologize for the error. I have also shielded your account so any further reports will require a secondary review” (emphasis added).

I'm thrilled, of course, that James got his post reinstated. But if a “primary review” was all it took for a largely innocuous item by a popular Facebook user to be removed, then heaven help us common plebs with our “unshielded” accounts.