An Exiled Scholar Says Thailand's Junta Is Harassing His Family 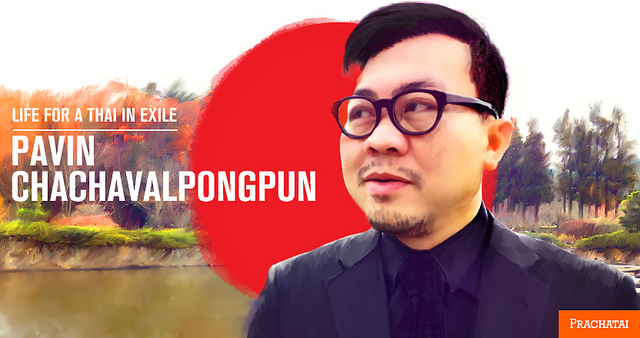 Image from Prachatai, a content partner of Global Voices

The family of an exiled anti-junta academic is reportedly being harassed by soldiers in Bangkok, Thailand.

Pavin Chachavalpongpun, professor of Kyoto University and currently a visiting scholar at University of Cambridge, wrote on Facebook that soldiers have repeatedly visited the house of his sister in order to stop him from speaking against the military-backed government and the monarchy. He gave more details in his article published by The Diplomat online magazine:

Apart from sending officers to my home, the military also called up my sister at her workplace twice, ordering her to inform me that if I did not stop discussing the Thai monarchy, my family would have to “pay the price” for my activities outside Thailand. The military also demanded that my entire family in Bangkok report themselves to an army camp, and that, if they failed to do so, there would be another visit.

Pavin is a known critic of the junta. He has also consistently advocated for the reform of the Lese Majeste Law (anti-royal insult law) which he argues is being abused to silence the opposition. When the army grabbed power in 2014, Pavin was teaching in Japan. He was summoned several times by the junta to undergo ‘attitude-adjustment’ but he refused to comply with the military orders. The government eventually cancelled his passport forcing him to seek asylum in Japan.

As an academic, Pavin has been giving lectures in many countries about the coup in Thailand and the need for international pressure to restore civilian rule, elections, and democratic institutions in his country. He was about to speak in University of Oxford on February 24 when he received a message from his sister about the surprise visit of some soldiers in their home.

This is not the first time that Pavin says the junta has tried to influence Thai citizens’ behavior abroad. Last year, Pavin claimed that the Thai government warned Thai students in Chicago and Germany about losing their scholarships if they attended the lecture of the exiled scholar.

Despite his international appeal for help against this recent scare tactics of the junta, Pavin wrote on Facebook that soldiers returned to the home of his sister:

You have punished me, hunt me (even when I did nothing wrong) — I already found this injustice unbearable. But to go after my family who had nothing to do with me — this is absolutely unacceptable. I will fight against this intimidation to the best of my ability. Don't push me further into the corner!

I dont think it was done by our officers. I don’t think anyone was threatened. Why would we make any threat? It’s not like we’re going to arrest (the sisters)

After this denial, Pavin’s sister sent a photo to a journalist to prove that a soldier visited her home:

In an earlier interview, Pavin said he wishes to return home to Thailand and continue his role as an academic:

I will continue what I do because it’s my role as an academic. I do hope to return to Thailand because my family is there. But if I have to close my ears and mouth, I’d rather stay outside.