Violence Escalates on Eve of Elections in Jamaica 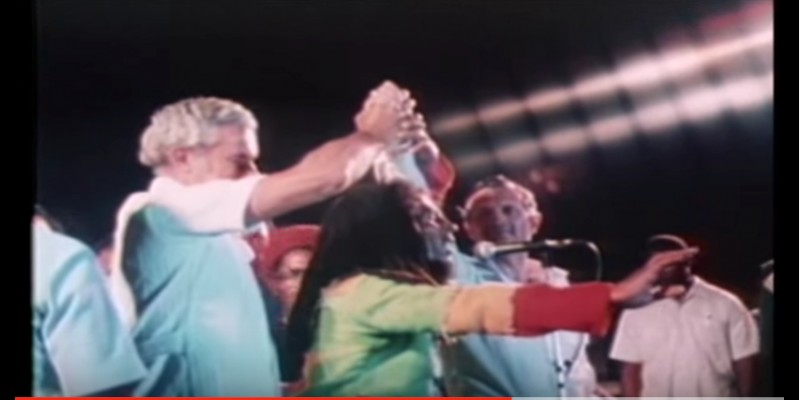 Screenshot of a YouTube video of the One Love Peace Concert, held in Jamaica on April 22, 1978. The concert was aimed at quelling the political violence of the election season; Bob Marley brought the leaders of the opposing political parties — Michael Manley (PNP) and Edward Seaga (JLP) — up on stage and joined their hands together in a symbolic gesture of unity.

A series of violent incidents and alleged instances of political intimidation in the past two weeks has had a dampening effect on Jamaica's pre-election fever (often called the “silly season”) as the island prepares for general elections on February 25. The latest incident was a shooting at a mass rally in the Prime Minister's constituency on February 23, the final night of campaigning.

Last night's drama follows a string of violent incidents connected to political events (but not necessarily politically motivated), in which Jamaicans have lost their lives or been injured. The country has a long history of turbulent elections.

On February 7, two men were shot and killed and three injured while attending a mass rally of the opposition Jamaica Labour Party (JLP), in Montego Bay. One of those killed was one of the town's “most wanted” men. A third man later died.

On February 9, also in Montego Bay, one man was shot and killed and three other people wounded in a JLP motorcade in the Flanker district. Twelve motor vehicles were also damaged in the incident. Police said the motivation for both incidents was was gang-related, not political. The Montego Bay police chief noted he had not given permission for the motorcade.

On February 22, a drive-by shooting in Montego Bay's Canterbury district left four JLP supporters and a 13-year-old boy suffering from gunshot wounds. One of the injured men subsequently died.

On February 23, a man was shot dead at a dance held by Horace Dalley, the incumbent People's National Party (PNP) candidate for Northern Clarendon. Initial reports suggest this, too, was not a “political” crime.

There have been numerous confrontations in several constituencies across the island this month, and today the JLP is accusing a PNP supporter of pulling a gun on a JLP councillor in opposition leader Andrew Holness's constituency in inner city Kingston.

While several incidents have been attributed to gang activity, there's growing concern about the prospect of a safe election tomorrow, especially in marginal constituencies or ones that have already been the scene of local conflicts since the election date was announced on January 31. Last night's incident might have put the Prime Minister herself in danger, since she was on stage at the time of the shooting and remained there afterwards, during ten minutes of widespread panic by the crowd.

Music, entertainment and the spectacle of politicians kicking up their heels on stage at party rallies are an integral part of the Jamaican political scene. The incumbent People's National Party's final public rally, held in Prime Minister Portia Simpson-Miller‘s South West St. Andrew (Kingston) constituency and broadcast live last night on Television Jamaica, was another classic example of this blend of cultural expression and political message, all aimed at galvanizing supporters. Business leader and media guru Marcia Forbes tweeted in frustration:

Buy expensive airtime to carry music concert after refusing to debate? What is the PNP thinking? #JaVotes2016 #Jamaica

But the PNP event proceedings took a turn for the worse when gunshots rang out in Portia Simpson Miller Square (commonly known as Three Miles), an intersection in downtown Kingston, where the party faithful were gathered. Kingston Public Hospital reported that two people were admitted with what appeared to be gunshot wounds, one with a stab wound and 36 others, including two children, with non-life threatening injuries sustained during the stampede of frightened supporters. Police Commissioner Carl Williams has since denied that there were any gunshot wounds inflicted and that the shooting in fact occurred outside the meeting.

A man lifts a baby to safety amid a stampede at @JamaicaPNP meeting in St Andrew SW after a gunfire #JaVotes2016 pic.twitter.com/t6tPAQYya7

Television viewers commenting on Twitter reacted with shock, with many commenting on the prime minister's remarks immediately after the shooting incident. The Prime Minister seemed to imply that the “evil” incident was orchestrated by the JLP and that she was expecting such a disruption in response to the Montego Bay shooting. Peppering her words with religious references and in a defiant tone, she pledged to find the perpetrators, adding: “I will deal with it.”

NGO member Jaevion Nelson expressed concern over Simpson Miller's “problematic” comments and decried what he sees as the casual normalisation of violence in Jamaican society:

last night was a perfect example of how unmoved many of us are by incidents of violence.

Nelson concluded, on a resigned note:

we sigh, sing a song pray and just move on as if nothing happened. this is a daily occurrence.

Many online and traditional media commentators also questioned the police response—or rather, their lack of speedy action—immediately following the shooting, but not everyone agreed that their actions were inappropriate. The Prime Minister continued speaking after the gunshots were heard and did not leave the stage.

UPDATE: “We cannot say it was politically motivated. We have no evidence to support that” – ACP #EalanPowell on shooting at PNP rally

Meanwhile, some voters fear that the atmosphere of intimidation in some areas could deter voters from turning out on February 25. The Jamaica Gleaner's editorial cartoon this morning reflected this concern, suggesting that undecided voters might withdraw their support for either party:

At this point, prospects for voter turnout are not particularly encouraging. Election day workers and the security forces voted early, and the turnout was slightly lower than in 2011. According to an RJR opinion poll conducted by Don Anderson, the race could be very tight, with the gap narrowing.

In the last election in 2011, the PNP won 42 of the 63 seats in the House of Representatives, seven of them with margins of fewer than 300 votes. Going in to this election, civil society organizations such as WE-Change Jamaica, National Integrity Action and the 51% Coalition have continued to keep the focus on the issues. The Electoral Commission of Jamaica is also urging Jamaicans to come out and vote.