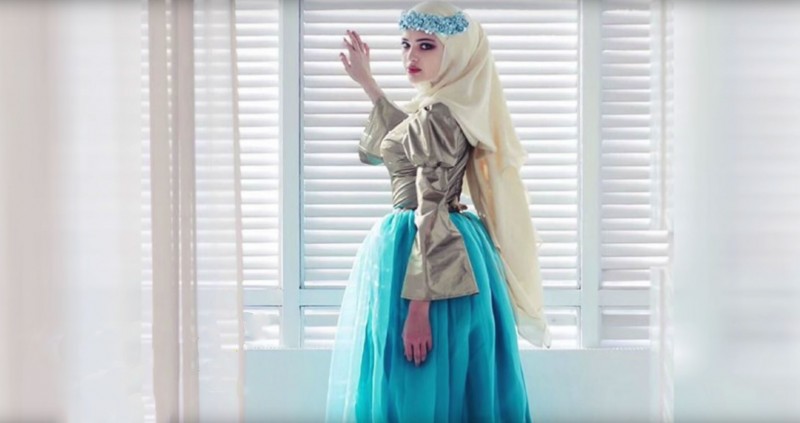 Many models dream of scoring a photoshoot for Dolce & Gabbana. 17-year-old Ilona Bisultanova's dream came true last month, when she was hired to pose for pictures wearing new headscarves designed by Stefano Gabbana, who then shared the photographs on his Instagram account, where he has more than 707,000 followers.

Back home in Chechnya, however, Bisultanova's compatriots didn't take kindly to her collaboration with an openly homosexual man. Gabbana's account was soon flooded with angry comments, harassing Bisultanova for working with him. Haters also criticized her for being insufficiently Muslim, and for (apparently) plumping up her lips for the pictures, either with makeup or lip augmentation.

Some comments from Chechen Instagram users defended Bisultanova, congratulating her on representing Chechnya on the world stage, but these wellwishers were decidedly in the minority.

Some of the comments included the following remarks:

A true Muslim woman who has iman [the true faith] to cover herself like this would never allow a world-famous gay to publish her photos on his page, among others of his kind.

Why would anyone wear a hijab while violating all the prohibitions and the guidance of Allah!!! If she's wearing hijab, it's not because of love and fear for the Creator!!! So what's the point in that!!! I'm talking right now about Muslim issues in general.

This is her natural beauty [referring to her lips]. Everyone is just envious. Ilona is very beautiful—Allah has willed it so. [She is] smart and pretty and talented.

Bisultanova is one of the faces of Dolce & Gabbana's new collection of hijabs and abayas, which targets luxury fashion wearers in the Muslim world. Have a look at the photos and judge for yourself how suited Bisultanova is to this role.

According to the independent television station Dozhd, Bisultanova worked until recently for the Grozny-based Firdaws fashion house, which is controlled by Ramzan Kadyrov's wife, Medni. Several weeks ago, Bisultanova launched her own fashion line, “Masterskaya by Ilona Bisultanova.” (Her company's Instagram account, too, has been made private. It has more than 21,000 subscribers.)

Ramzan Kadyrov, the brutal leader of Russia's Chechen Republic, is a known critic of homosexuality, to say nothing of gay rights. In 2009, he said homosexuality, prostitution, and drug dependency are Russia's biggest modern problems. What the country needs, he argued, are “soldiers—the defenders of the Fatherland. That is why the Chechens will be always at the forefront.”