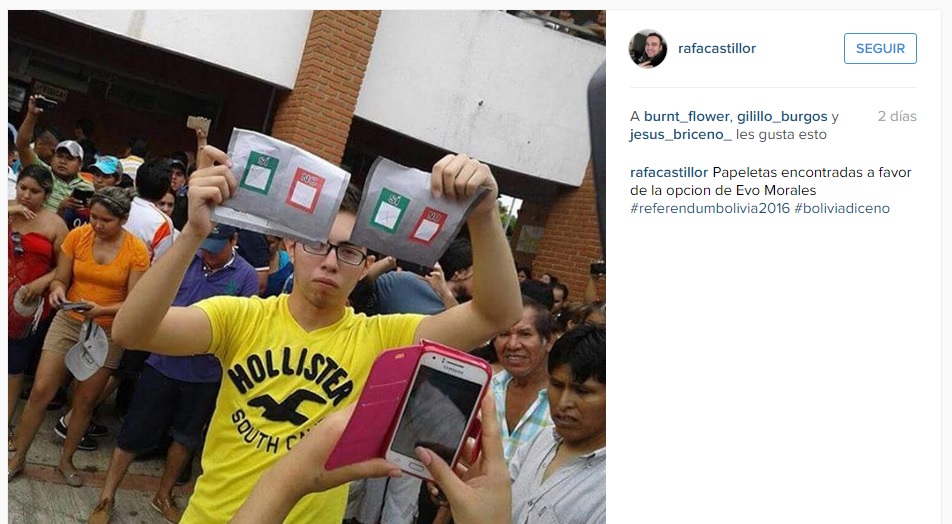 Social media has been a crucial platform for citizens to denounce alleged electoral injustice in Bolivian President Evo Morales [2]‘ referendum on changing the constitution to allow him to run for a fourth consecutive term and possibly serve as president until 2025. Hundreds of images, videos and recorded voices messages taken by voters have been circulating throughout Facebook and WhatsApp since Sunday, February 21, reportedly showing acts of fraud.

So far, partial results from the electoral commission OEP [3] (Órgano Electoral Plurinacional) indicate that Morales has been unsuccessful in sequestering a seat for the presidential race of 2019. With 96 percent of the votes accounted for as of Tuesday evening, the electoral board reflects the referendum's defeat at 51.7 percent against, versus 48.3 percent, a margin of 3.4 percentage points.

From voter impersonation to invalid ballots, voters wrote online that they witnessed varying degrees of fraud, largely committed by electoral delegates attempting to manipulate the number of sí votes to help secure a win passing the referendum.

Santa Cruz native Gabriela Molina was a delegate for Sunday's referendum. In a personal interview I conducted with her, she stated:

None of this is new. But this time, it shows the power of social media, and that now we are able to impact a campaign with the truth.

Many voters arrived at their polling station to find inadequate materials, forcing them to wait for ballots to arrive after their station had run out, whereas other stations opened hours late because they had not received ballots or electoral registers before the polls opened 8 a.m. Sunday, as I witnessed first-hand.

Accusations of missing material from the first to the fourth city circles of Santa Cruz where the NO vote wins.

In addition to official media reports, voters from at least one polling site captured on video [7] the burning of ballots by citizens after they found them in a room with a group of delegates who had checked “sí” on their own accord.

In Bolivia's largest metropolis of Santa Cruz de la Sierra, the local electoral board TED (Tribunal Electoral Departamental) confirmed that the more than 5,300 voters who were unable to vote [9] on Sunday due to the burning of their ballots will return to the polls on March 6.

The Facebook page of opposition’s advocacy group “Me Comprometo, Voto No” (I Make the Commitment, I Vote No) [10]posted images supposedly revealing votes being falsely attributed as sí as they were entered into the OEP (Órgano Electoral Plurinacional) electoral commission’s system. The images were taken by voters and delegates alike cross-checking their designated polling tables with the information available online.

Below, the polling station results showing a clear NO victory. Above, the falsified numbers for the same station.

Local newspaper El Día [15]reported cases, some of them uploaded using social media, of fraud in which numerous deceased persons were still eligible to vote and listed on the electoral roll the day of the vote. The Electoral Supreme Court refuted [16] those claims, saying “there's no way a dead person's name can be used to vote […] because the official list also shows the voter's photo”.

Cruceños (city locals) have since gathered at the Fexpo Cruz [17] (International Convention Center) in Santa Cruz de la Sierra, monitoring TED employees as they compute the ballots and asking them to respect their votes and demonstrate transparency during the official count.

Delegate Molina spent the day at the Fexpocruz making sure the ballots were counted correctly. During the interview with me, she added:

I’m enraged, we are all enraged with how in our faces the fraud has been.

The problem is that there are no checks and balances, so that’s what’s incredibly frustrating in this country. No matter how much evidence, and no matter how much we can discuss facts, there is no law against this.

That’s what this [opposing the referendum] is all about.

In the meantime, opposition voters hope the fraud does not change the outcome predicted by authorized polling company Equipos Mori [18]on Sunday, a 49-51 percent victory for the “no.” They have expressed frustration with the slow count, and after witnessing multiple accounts [19] of fraud committed during voting day, are concerned the remaining ballots may be tampered with in an effort to skew results.

No to eternal rulers, No to people hungry for power, No to the constitutional amendment. Bolivia says no. No Evo. No more. Bolivia ought to be respected.

As celebrations erupted throughout the country following Mori’s unofficial results, Vice President Álvaro García Linera declared [32] a “technical tie,” advising the opposition to refrain from premature celebration as “it’s highly probably that whatever is on television will drastically change within the following days,” and “your celebration might turn into tears by the publication of the final results.”

President Morales stated on a press conference  [33]on Monday, “Now is not the time to party, we need to wait with serenity for the final results.”

If one thing is clear from Bolivia's national referendum vote this past Sunday, it's that the Bolivian people have had enough of corruption.

Update February 25, 2016. President Evo Morales conceded defeat in the weekend referendum according to a press release published by the Ministry of the Presidency [34].