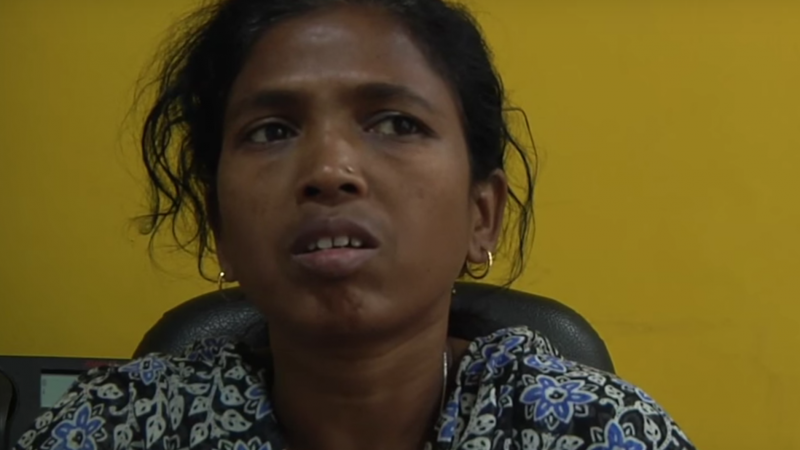 Indigenous political leader and human rights defender Soni Sori, who has spoken out against the brutalization of tribal people by security forces in Bastar district in the central Indian state of Chattisgarh, was attacked by unidentified men on February 20. The assailants rubbed oil paint possibly mixed with chemicals on her face, which blackened her skin and caused a burning sensation, sparking initial reports that she had been the victim of an acid attack.

Sori had received death threats prior to the attack. As news of the violence against her spread, many condemned it on social media, speaking out in support of Sori.

I strongly condemn the attack on tribal activist and Aam Admi Party leader #SoniSori. #Chhattisgarh Govt must nab and punish the culprits.

Ashutosh, a spokesman for the Aam Aadmi political party to which Sori belongs, wrote:

Attack on Soni Sori is another attempt to muzzle the voice of dissent.1 might disagree with one's views but this is no way to deal with.

A ‘prisoner of conscience’

India, the largest democracy in the world, has within itself spaces that are neither democratic nor free. Bastar is one such place. In an effort to tackle a Maoist insurgency, special police officers were deployed in 2005 by the state of Chattisgarh's government with backing from the Indian home ministry. Before being declared illegal by the Supreme Court of India in 2011, these special police officers, comprised largely of uneducated youth, perpetrated violence against tribal people of the region on mere suspicions that they could have links with Maoist militants.

Tribal people endured human rights violations such as unlawful arrest, violence, rape and even death at the hands of the special police officers, and later other authorities in Bastar.

In a blog post published in 2009, before the Surpreme Court ruled that special police officers were illegal, Umar Khalid explained:

Hundreds of villages have been evacuated in Chattisgarh alone and the mainstream media [barring a few exceptions] never found time to document it. Women of Chattisgarh are alleging rape by Salwa Judum [special police officers] men, but the courts in India refuse to listen. […] And precisely when the people retaliate on these forces, these mercenaries become national heroes overnight for the government.

Soni Sori has been a vocal activist against the atrocities in the region. In 2011, she was taken into custody on accusations that she was helping Maoists operating in the area. She remained in jail for more than two years before being released in 2014 on bail; six out of the eight cases against her were dropped, but it’s unclear what became of the final two.

She said while behind bars at the Raipur Central Jail, she was raped and sexually abused, revealing through letters that stones were rammed into her genitals and she was subjected to frequent electric shocks. 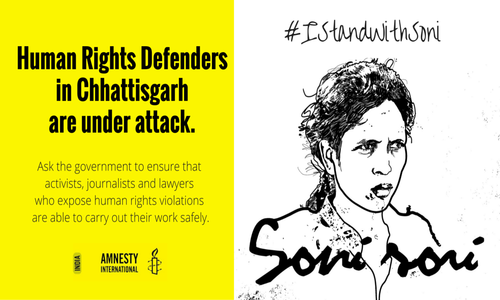 Amnesty International described her as a “prisoner of conscience”, saying that the charges brought against Sori and her nephew Lingaram Kodopi were filed in retaliation for the fearlessness they exhibited in speaking out against human rights violations regularly faced by tribal people living in areas considered by the Chattisgarh state and security forces as Maoist strongholds. Sori's husband, Anil Futane, was first among the three to be arrested on charges of masterminding an attack on a local leader of the Indian National Congress political party; he spent nearly three years in jail before being acquitted of all charges. He died shortly after being released from jail.

‘Anger gives me courage to fight on’

Sori's story has largely been ignored by the India's and the world's mainstream media, both of which often fail to reach out to India's rural poor.

Facebook user Rahul Sen ruminated on the possibility of the attack against Sori never making national headlines like the recent arrest of Jawaharlal Nehru University Students’ Union leader Kanhaiya Kumar on sedition charges over supposedly anti-India slogans shouted at a campus rally. He wrote on Facebook (reposted with permission):

Soni Sori was also an anti-national in the eyes of the state, seditious beyond the limits of common sense. And, hence, the inflicted tortures – the stone chips and pebbles that tore into her vagina and anal space – were beyond the purview of the sensible. Yet, she would not occupy all of the front-page of ‘The Telegraph’ or let's say, even deserve a mention in most of our newsfeeds and Facebook posts. Except when we are ‘speaking for’ the oppressed; or theorizing on the state's duplicity; or even better, critiquing the critics for not taking her seriously, as I am doing through this post. She lives in this absence, through each passing reference; a very deliberate absenting of a life whose survival in itself is political. Not all lives are grievable, not all anti-nationals affect us universally.

Even though Sori's attack hasn't become a trending topic on either Facebook or Twitter, people who are aware of her struggle have come together to support her in the fact of violence. India Resists, a citizen media platform, started a petition condemning the attack and demanding prompt action against the culprits.

Sori has since been moved from Chattisgarh to Delhi for treatment. In an interview a few months before the attack, Sori spoke about her prolonged determined struggle against violence and injustice.

I have gone through a lot. I was tortured, electrocuted. My body has gone through lots of suffering. I lost my husband to the hands of injustice. When I think of those days, I do get angry. And this anger consumes all the fear I have ever had. This anger gives me courage to fight on. I see myself getting involved in other people’s struggle. I do not know if I can get them justice, but I will make sure their stories of suffering will be heard outside. Their stories will be spread. And that is my aim.

The recent attack against her speaks to the fact that she is having to pay dearly for a struggle far more universal than it may at first seem: the struggle for freedom from state-sponsored violence.